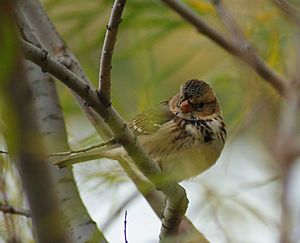 The immature Harris's sparrow has a brown striped head as opposed to the black striped head of the mature breeding bird. Note the orange bill.

Harris's sparrow (Zonotrichia querula) is a large sparrow. Their breeding habitat is the north part of central Canada (primarily the Northwest Territories and Nunavut, ranging slightly into northern Manitoba and Saskatchewan), making it Canada's only endemic breeding bird. In the winter they migrate to the Great Plains states of the United States, from southern South Dakota to central Texas. The common name of this species commemorates the American amateur ornithologist Edward Harris (1799–1863).

This is a very distinctive looking species. Breeding plumage birds have conspicuous pink bills and black on the crown, face, throat and upper breast, contrasting with grey on the sides of the head and neck. The back is brown, overlaid with heavy black streaking. There are two white wing bars. Breeding birds have white lower underparts with some black mottling on flanks. Non-breeding adults are more buffy than grey and brown, with reduced or absent black markings and often have whitish scalloping on the head and throat. Immatures have less black than all adult plumages, normally marked with a white chin and throat, a black malar stripe and a broad smudgy black breast-band. Juveniles have a brownish crown streaked with black and fine dark streaks and some broader black markings on the underside. Birds moult from July to September. Confusion of wintering birds is possible with the winter Lapland longspur (Calcarius lapponicus) but that species is much shorter-tailed with white outer rectrices, has rich rufous in greater coverts, and is strictly terrestrial on open ground.

The song of the Harris's sparrow is usually delivered from a high perch. The song consists of a series of one or more clear high wavering whistles followed by another series in higher or lower pitch. They have also been known to call out a strong, metallic chink, as well as some variable musical twittering. 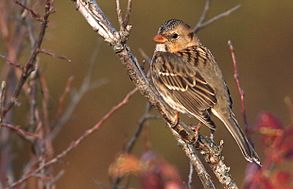 Spring migration commences around late February with birds arriving on breeding grounds by May. Sparrows arrive on their wintering grounds as early as late October, though mostly during November and early December. Records from Banff National Park suggest Harris's sparrows use mountain valleys as migration routes. Apparently, fall migration is less strict than spring migration as Harris's sparrows regularly wander about prairie provinces in Canada until harsh weather forces them south.

The Harris's sparrow generally feeds on the ground, scratching vigorously in the leaves and soil for food. Observed foraging during nesting was 85% ground-gleaning. During the breeding season individuals typically forage alone or with a mate. Primary in the diet (66% of stomach contents of breeding birds) are seeds, largely of Carex sedges, grasses and Scirpus bulrush. Also important in the breeding season diet are fruits, largely black crowberry (Empetrum nigrum), mountain bearberry (Arctostaphylos alpina) and various Vaccinium species. Pine needles, flower buds and blossoms are eaten supplementally. Larval invertebrates are important from June to September in the diet, as available prey becomes more common at this point. The principal preferred animal prey includes beetles, flies, bees, ants, moths, butterflies, spiders, cicadas, aphids and leafhoppers. The diet of wintering Harris's sparrow is less well-known and has not been quantitatively studied.

Males of this species often group together to sing at dusk. In winter flocks, Harris's sparrows maintain linear dominance hierarchies that determine access to food and roost sites. The most dominant birds are the oldest males which usually also have the largest bibs. "Jump fights" between males occasionally occur, consisting of birds facing off, then leaping at each other, pecking, clawing and beating each other with wings. Testosterone alone does not affect the dominance status of winter birds. If first winter birds have their feathers dyed black, creating an artificially large bib, they rise in the dominance hierarchy past females and other young males. It is usually found in flocks up to several dozen in winter, individuals regularly wandering outside of the "normal" range and turning up in flocks of other sparrow species.

Breeding pairs establish a territory of about 2 ha (4.9 acres). Nests are usually constructed in early to mid-June. Eggs are usually laid by late June to July, depending on when snow in their habitat completely melts. In this species, nests are placed in a well-hidden spot on the ground underneath a thick bush or small conifer or in mossy depression in thick grass clumps. Both parents build a cup nest out of twigs, grass, moss and lichens and line it with fine grasses. From three to five eggs are laid, being variably greenish or greyish in colour with differing degrees of small reddish-brown spot. Eggs average 22.2 mm × 16.5 mm (0.87 in × 0.65 in) in size and weigh approximately 3.3 g (0.12 oz). The incubation stage lasts for approximately 13.5 days. The chicks weigh about 3.1 g (0.11 oz) upon hatching. The young will fledge in about 8 to 10 days, from July 4 to July 13. About 3 weeks after fledging, the young become independent of their parents. Second clutches may be laid if the first is destroyed, usually prolonging the brooding period a further three days for the parent sparrows. The species is arguably the least studied North American sparrow due to its isolated nesting territory. The first nest ever found was discovered 1931 in Churchill, Manitoba by ornithologist George M. Sutton, 91 years after the species was initially described.

The Harris's sparrow has lived for up to 11 years and 8 months in the wild. Predators on the nest can including varied terrestrial mammals, including Arctic ground squirrels (Spermophilus parryii) and stoats (Mustela erminea). Harris's sparrows provide an easy target for these predators due to the location of their nests on the ground. Canada jays (Perisoreus canadensis), northern shrikes (Lanius excubitor) and merlins (Falco columbarius) can be a serious predators at the nest (including both nestlings and adults). Shrikes, sharp-shinned hawks (Accipiter striatus) and great horned owls (Bubo virginianus) are known predators of wintering Harris's sparrows. As an anti-predator adaptation, Harris's sparrows fly up into trees when startled by other animals, usually issuing an alarm call in the process (weenk). They duck down to the ground when threatened by other birds. They also produce alarm calls when threatened to alert others.

This species is classified as being of near threatened by the IUCN. The total breeding population is estimated at about 2 million individuals. However, the species came to be included on the "Audubon Watchlist" because there appears to have been a decline in the number of birds observed in annual Christmas Bird Counts across North America. The species is fairly adaptable in wintering habitat and feeding opportunities and its habitat is isolated enough to be out of reach for heavy human development, which makes the recent declines something of a mystery. The species breeds on the northern edge of boreal forests and it is possible that habitat change in their breeding range is affecting this sparrow. The boreal forest, beyond heavy logging, has been adversely affected by increased wildfire and declining soil quality, both of which are likely correlated to global climate change.

All content from Kiddle encyclopedia articles (including the article images and facts) can be freely used under Attribution-ShareAlike license, unless stated otherwise. Cite this article:
Harris's sparrow Facts for Kids. Kiddle Encyclopedia.