Harris (also Scottish Gaelic: Na Hearadh, pronounced [nə ˈhɛɾəɣ]) is the southern and more mountainous part of Lewis and Harris, the largest island in the Outer Hebrides, Scotland. Although not an island itself, Harris is often referred to as the Isle of Harris, which is the former postal county and the current post town for Royal Mail postcodes starting HS3 or HS5. See HS postcode area. A person from Harris is known as a Hearach.

Harris is most likely to be the island referred to as Adru (meaning thick, stout or bulky) on Ptolemy's map of the British Isles. In Old Norse, a Hérað was a type of administrative district, and the name may derive from that. An alternative origin is the Norse Hærri, meaning "higher" - a reference to the high hills, especially in comparison with the much flatter Lewis lying to the north. Most of the place names on Harris are Gaelicized Old Norse.

The Gaelic name "Na Hearadh" was also an earlier term for the Rinns of Islay. 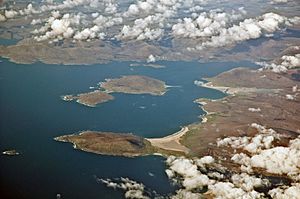 Harris divides naturally into northern and southern parts which are separated by West and East Loch Tarbert. These halves are joined by a narrow isthmus at the main settlement of Tarbert (An Tairbeart or Tairbeart na Hearadh). 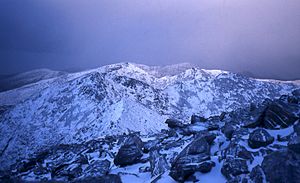 The bedrock of Harris is largely Lewisian gneisses, which were laid down in the Precambrian period, interspersed with igneous intrusions. One of these intrusions forms the summit plateau of the mountain Roinebhal. The rock here is anorthosite, and is similar in composition to rocks found in the mountains of the Moon.

Harris is a part of historic Inverness-shire, and was administered as such under older administrative divisions. In the 2001 census, Harris had a usually resident population of 1,916. It is part of the South Lewis, Harris and North Uist National Scenic Area, one of 40 in Scotland. 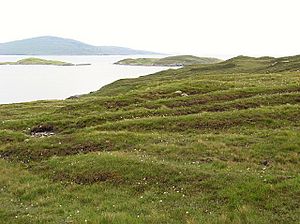 North Harris, adjoining Lewis, contains Clisham (An Cliseam), the highest mountain in the Outer Hebrides at 799 metres (2,621 ft). The area is sparsely populated. Beyond Tarbert, the furthest settlement is Hushinish (Hùisinis) on the west coast. A bridge from the east coast links Harris to the island of Scalpay (Sgalpaigh na Hearadh).

In March 2003 the 25,300-hectare (62,500-acre) North Harris Estate was purchased by the North Harris Trust, a development trust, on behalf of the local community. In April 2006 the Trust hosted the Highlands and Islands Community Energy Company conference "Community Energy: Leading from the Edge" in Tarbert. In early 2008 the Trust received planning consent for three 86 metre (282 ft) wind turbines to be located at Monan. In 2008 Mike Russell, the Scottish environment minister announced that the North Harris Trust had begun canvassing local opinion about a proposal to create Scotland's third national park in the area. 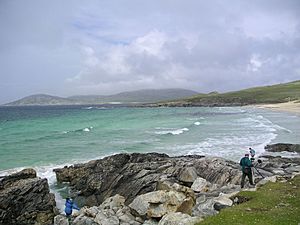 The southern part of Harris is less mountainous, with numerous unspoilt, white sandy beaches on the west coast. Its main settlements are Rodel (Roghadal), known for its medieval kirk of St. Clement (Eaglais Chliamhain), the most elaborate surviving medieval church in the Hebrides after Iona Abbey, and Leverburgh (An Tòb na Hearadh or An t-Òb na Hearadh). A ferry sails from the latter to Berneray (Beàrnaraigh na Hearadh), an island off the coast of North Uist (Uibhist a Tuath), to which it is joined by a causeway.

The beaches of Luskentyre and Scarista are amongst the most spectacular. From the former the island of Taransay, where the BBC Television series Castaway 2000 was recorded, is seen most clearly from Harris. At Scarista the beach is a venue for surfing and kite buggying. Nearby the Harris Golf Club offers well kept greens and views of the hills, but there is no play on Sundays. Scarista is the birthplace of the author Finlay J. MacDonald, who wrote about growing up on Harris in the 1930s. His books: Crowdie and Cream, Crotal and White and The Corncrake and the Lysander paint a vivid and humorous picture of Hebridean life.

Tarbert is the main port and main settlement of Harris, with a population of about 550. The name Tarbert comes from the Norse tairbeart meaning "portage" or "isthmus". It is located on an isthmus between Loch Tarbert and West Loch Tarbert. The village has a ferry terminal, local tourist information and some small shops, including a Harris Tweed shop overlooking the main access road to the CalMac ferry terminal and a general grocery store.

The island of Scalpay is located at the mouth of East Loch Tarbert. It was known historically for its fishing industry, though little of that remains. The island was linked to Harris when the Scalpay Bridge was opened in 1997, connecting Scalpay to the settlement of Kyles on Harris.

Media attention has recently been drawn to angling on Harris, and Tarbert in particular. Local fishermen have been targeting large Common Skate in the area and have had prolific catches, mainly from West Loch Tarbert, in autumn and winter. There is an application for the Scottish shore record of 183 pounds (83 kg) although a fish estimated at 204 pounds (93 kg) was later landed. These catches have attracted the attention of the local and national press and sea angling's leading magazines. 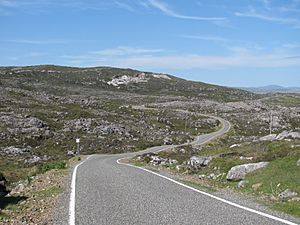 In common with many parts of the Highlands and Islands Harris has numerous single-track roads with passing places at intervals. Ferries sail from Tarbert to Uig in Skye.

Harris is also known for Harris tweed, although this is mostly now made in Lewis.

Harris has a largely Presbyterian population that practises sabbatarianism: all retail outlets are shut on Sunday. This area has been described as the last bastion of fundamentalist Calvinism in the UK, and there was controversy in 2006 when Caledonian MacBrayne started a Sunday ferry service. However, a Sunday ferry service between Berneray (North Uist) and Leverburgh (An t-Òb) in the south of Harris has been introduced with relatively little controversy and now operates all year round. This allowed one to travel to Lewis and Harris by ferry on a Sunday before the Sunday ferries to Stornoway started in 2009. The North Uist end of the connection can be reached by other ferry routes that also operate on Sundays (Uig-Lochmaddy and Oban-Lochboisdale).

Tinted shots of parts of the island were used by Stanley Kubrick as the surface of Jupiter in the film 2001: A Space Odyssey.

The nearby island of Taransay became well-known following the BBC show Castaway broadcast in 2000 and various scenes were shot on Harris itself. The movie The Rocket Post was also filmed on Taransay in 2004. The movie is based on the story of Gerhard Zucker, the German Rocket Scientist who in 1934 used the Isle of Scarp as his base for experimenting with sending mail over long distances by rocket.

The local newspaper is the Stornoway Gazette; there is also a community newspaper published monthly, called Dè Tha Dol? 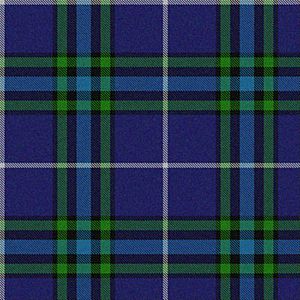 The Isle of Harris district tartan

A group of sixth-year pupils at the Sir E. Scott secondary school in Tarbert won the 2003 Young Enterprise UK Award for their design, marketing, and selling of the Isle of Harris district tartan. The tartan is officially registered with the Scottish Tartans Authority (under number 6198) and with the Scottish Tartans World Register (under #2981). Its symmetrical threadcount is listed as "WW8B80K8LG16K16LB24", with a colour palette of:

All content from Kiddle encyclopedia articles (including the article images and facts) can be freely used under Attribution-ShareAlike license, unless stated otherwise. Cite this article:
Harris, Scotland Facts for Kids. Kiddle Encyclopedia.