Harrison is a town in Cumberland County, Maine, United States. The population was 2,730 at the 2010 census. A historic resort area, Harrison straddles Long Lake and Crystal Lake. It is part of the Portland–South Portland–Biddeford, Maine metropolitan statistical area.

The Massachusetts General Court granted Otis Field Plantation in 1771 to James Otis and other heirs of Captain John Gorham and his company for their service in the 1690 Battle of Quebec. It replaced a 1736 grant which had been ruled invalid. In 1797, the plantation was incorporated as Otisfield. On March 8, 1805, Harrison was set off and incorporated from portions of Otisfield and Bridgton. It was named after a principal landowner, Harrison Gray Otis of Boston, the heir of James Otis.

In the autumn of 1792, two brothers from Gorham, John and Nathan Carsley, built a camp and cleared land in Harrison. During the winter they returned to Gorham, coming back in March 1793 with their wives. Because John Carsley and his wife remained in Harrison when Nathan Carsley and his wife resumed living in Gorham until 1796, he is considered the town's first permanent settler. More pioneers arrived, living in log houses chinked with moss. The outlet of Crystal Lake into Long Lake provided water power for industry, and James Sampson erected at Harrison village the first sawmill and gristmill. Over the years other industries followed, including a wire-making business, blacksmithy, shingle mill, harness-maker, foundry, carriage maker, clothing maker and shoe shop. Scribner's Mill (now a museum) was built in 1847 on the Crooked River. On the Bear River, in 1867 the Harrison Water Power Company established the Bear River Woolen Mill, destroyed by fire in 1872.

In 1832, the Cumberland and Oxford Canal opened, connecting Portland with Sebago Lake. A series of 27 locks lifted vessels from sea level at Casco Bay to Sebago Lake, 270 feet (82 m) above sea level. From there they traveled up the Songo River to Brandy Pond, then continued along the Chute River to Long Lake. As the company name indicates, the canal was originally planned to reach Oxford County, but instead terminated at Harrison. The town became a center for trade and transportation, with wharves and warehouses lining the shore. 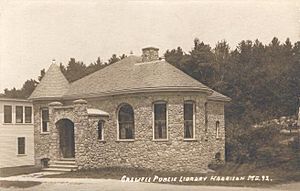 Caswell Library in 1914, built in 1908 and now on the National Register

In 1847, the Sebago & Long Pond Steam Navigation Company built Fawn, the first steamboat to ply the lakes and waterways. It had a shallow draft to navigate the winding Songo River, with passengers asked to shift sides as ballast to keep both paddlewheels in the water around sharp curves. The lakes became a popular summer tourist destination, with The Elm House (later called The Elms Inn) opening in 1860. When the Portland and Ogdensburg Railroad commenced service to Sebago Lake Station in 1870, the canal was abandoned as obsolete. Beginning in 1898, the Bridgton and Saco River Railroad, a narrow gauge line, delivered freight and passengers directly to Harrison.

In 1906, the Harrison Hotel opened. Camp Kineo operated beside Long Lake as a camp for boys. Today, Harrison remains a recreational area. Harrison is also home to Fernwood Cove, a half-season summer camp for girls on the same spot as Camp Chickawah was. It is located on Island Pond.

The Maine state routes that cross through Harrison are 117 and 35. Harrison is bordered by the town of Bridgton to its west, Waterford and Norway to its north, Otisfield to its east, and Naples to its south.

See Crystal Lake for other lakes with this name.

Crystal Lake (formerly Anonymous Pond) is north of Long Lake, and overflows into Long Lake through downtown Harrison. Smallmouth bass thrive in the lake, with a few lake trout.

There were 1,113 households, of which 29.6% had children under the age of 18 living with them, 55.6% were married couples living together, 8.7% had a female householder with no husband present, 5.7% had a male householder with no wife present, and 30.0% were non-families. 23.0% of all households were made up of individuals, and 8.5% had someone living alone who was 65 years of age or older. The average household size was 2.45 and the average family size was 2.84.

All content from Kiddle encyclopedia articles (including the article images and facts) can be freely used under Attribution-ShareAlike license, unless stated otherwise. Cite this article:
Harrison, Maine Facts for Kids. Kiddle Encyclopedia.