Along with winning the Stanley Cup in 2008, Zetterberg won the Conn Smythe Trophy as the Most Valuable Player of the 2008 Stanley Cup playoffs. He won gold medals in the 2006 Ice Hockey World Championships and 2006 Winter Olympics, as part of the first team to ever win both tournaments in the same year, also making him a member of the Triple Gold Club.

Zetterberg started his youth league career playing games for the Njurunda Sports Club, as did Fredrik Modin. In 2008, the club renamed their arena—until then known as Njurunda Ishall—to Modin & Zetterberg Hall in their honor. When Zetterberg was 15 years old he left Njurunda for Timrå IK.

Zetterberg caught the attention of the Red Wings' Assistant General Manager Jim Nill and Director of European Scouting Håkan Andersson during a tournament in Finland. While Andersson was trying to point out Mattias Weinhandl, Nill could not help noticing "this little Zetterberg guy who always seemed to have the puck."

Zetterberg was selected by the Detroit Red Wings 210th overall in the seventh round of the 1999 NHL Entry Draft. Detroit was under criticism at the time for "mortgaging its future", trading away many of its earlier picks in the 1999 Draft. After playing for Timrå IK of the Swedish Elitserien for the 2000–01 and 2001–02 seasons, Zetterberg signed his entry-level contract on 16 May 2002. Zetterberg came to Detroit to play his rookie season in the NHL in the 2002–03 season.

Zetterberg made his NHL debut against the San Jose Sharks on 10 October 2002, at the Joe Louis Arena. He played in 79 games his rookie season, scoring 22 goals and 22 assists for 44 points, leading all first-year players. Zetterberg finished the season as runner-up for the Calder Memorial Trophy as rookie of the year behind St. Louis Blues defenceman Barret Jackman. In his second season, Zetterberg nearly matched his rookie stats despite missing 21 games due to a broken leg suffered against the Vancouver Canucks early in the season on 5 November 2003. Due to the owners' lockout the next season, Zetterberg returned to Sweden to play for Timrå IK in 2004–05, leading the Elitserien in scoring with 50 points in 50 games. 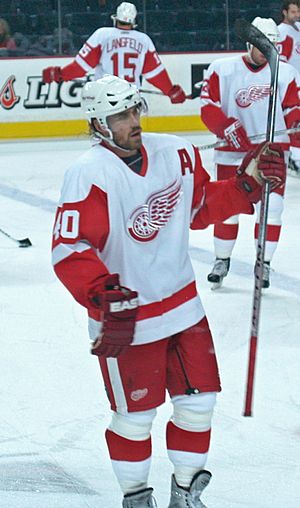 As the NHL resumed in 2005–06, Zetterberg emerged as an NHL star and was also named an alternate captain in the absence of team captain Steve Yzerman. He enjoyed his second best statistical season in 2005–06, tallying 39 goals and 85 points, second in team-scoring to Pavel Datsyuk in a lineup which included Zetterberg and teammates Tomas Holmström, Mikael Samuelsson, Nicklas Lidström, and Niklas Kronwall. The combination was dubbed the "Swedish Five", a concept similar to the famed Russian Five of the Red Wings during the 1990s. All five players would also skate together at the 2006 Winter Olympics, helping Sweden to a gold medal.

With the announced retirement of Steve Yzerman during the season, Swedish newspaper Aftonbladet speculated that Zetterberg might take over the captaincy for the Red Wings, but Lidström was instead named Yzerman's successor while Zetterberg was named an alternate on the day of the Red Wings' 2006–07 season opener. That season, Zetterberg was selected for the 2007 NHL All-Star Game, but withdrew to rest an injured wrist. Later in the year, Zetterberg scored his 100th career goal against the Phoenix Coyotes on 8 February 2007, prompting Coyotes head coach Wayne Gretzky to comment that Zetterberg is "probably the most underrated player in the league." Nine days later, on 17 February, in another game against the Coyotes, Zetterberg picked up his first career hat-trick, all power play goals, and added an assist on an empty-net goal by Jason Williams for a four-point game. He finished the season with 68 points in his injury-shortened 63-game season. 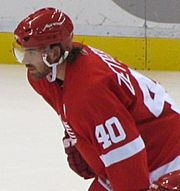 Zetterberg during a break in the action in 2006

Zetterberg began the 2007–08 season with a 16-game point-scoring streak, breaking the record of 14 games set by former Red Wing Norm Ullman in 1960. He was voted to start for the Western Conference in the 2008 NHL All-Star Game alongside teammates Chris Osgood, Lidström, and Pavel Datsyuk, but again did not play in the game due to back problems. Despite missing time due to injury, Zetterberg recorded a career-year with personal bests of 43 goals, 49 assists and 92 points in 75 games. He went on to add a 27 points in 22 playoff games, leading the Red Wings to the 2008 Stanley Cup championship, their 11th in team history. In game six of the Finals against the Pittsburgh Penguins, Zetterberg scored the Stanley Cup-winning goal and was awarded the Conn Smythe Trophy as playoffs MVP. His 13 playoff goals tied with teammate Johan Franzén for the Red Wings record for most in a single postseason. At the end of the season, Zetterberg was also up for the Frank J. Selke Trophy as the best defensive forward, but finished as a runner-up to Datsyuk.

In the final year of his contract in 2008–09, Zetterberg agreed to a 12-year, $73 million contract extension with the Red Wings on 28 January 2009. The deal is the longest and most lucrative in franchise history. Zetterberg recorded 11 goals and 13 assists for the Red Wings during the 2009 Stanley Cup Playoffs that saw them reach Game 7 of the Stanley Cup Finals, only to lose to their 2008 opponent the Pittsburgh Penguins.

Despite a slow start to the 2009-10 NHL Season, Zetterberg's play quickly improved, and he recorded the fourth hat trick of his career on 14 November against the Anaheim Ducks, scoring three goals in the third period of Detroit's 7–4 victory. He scored seven goals during the 2010 Stanley Cup Playoffs, which saw Detroit bow out in the second round against San Jose.

Zetterberg posted 80 points in 80 games in the 2010–11 NHL season. However, the Red Wings were eliminated in the 2nd round of the Playoffs, again to San Jose.

In the 2011-12 NHL season, Zetterberg played on the 2nd line alongside Valtteri Filppula and Jiří Hudler. Both teammates had career seasons playing on the line centered by Zetterberg. Filppula scored a career high 66 points while Hudler had a 50-point season (25 goals, 25 assists). The Red Wings fell 4–1 to the Nashville Predators in the first round of the Playoffs, their earliest playoff exit since 2006.

Zetterberg signed with EV Zug in Switzerland during the 2012—2013 NHL season lockout.

On 15 January 2013, Zetterberg was named captain of the Red Wings, succeeding Lidström who had retired. Despite missing 13 games due to chronic back problems, he scored over 40 points through the first part of the 2013–14 NHL season. However, he sustained another back injury during the 2014 Winter Olympics and underwent surgery, causing him to miss an estimated two months of the season while the Red Wings pursued a berth in the NHL playoffs for the 23rd straight year. Zetterberg returned for the final two games of the 2014 Stanley Cup playoffs as the Red Wings were eliminated in the Eastern Conference Quarterfinals by the Boston Bruins. He elected not to play for Sweden in the 2014 IIHF World Championship to further recuperate from his back injury.

On 6 November 2015, Zetterberg recorded his 300th career goal against James Reimer of the Toronto Maple Leafs. He became the seventh Swedish player to reach the 300 goal plateau, and the fifth player in Red Wings franchise history to have 300 goals and 800 points, following Gordie Howe, Alex Delvecchio, Steve Yzerman, and Sergei Fedorov.

On 9 April 2017, he played his 1,000th game for the Red Wings organization, as well as became the seventh in franchise history in total points.

During the 2017–18 season, Zetterberg reached several milestones. On 24 February 2018, he recorded his 335th career goal, tying him with Ted Lindsay for fifth all time in goals scored in franchise history. On 29 March 2018, he recorded his 954th career point, tying him with Sergei Fedorov for fifth all time in total points in franchise history.

On September 14, 2018, Red Wings general manager Ken Holland announced that due to a degenerative back condition, Zetterberg would be unable to continue with his NHL career. However, due to Zetterberg having 3 years left on his contract at the time of the announcement, he is not fully retired.

Zetterberg has been a consistent part of the Swedish national team, "Tre Kronor", since 2001. He has enjoyed a fair amount of success in the IIHF World Championships, winning a medal in four of the five years he appeared in the tournament. He was one of just three non-NHLers named to the Swedish squad for the 2002 Winter Olympics in Salt Lake City, Utah. 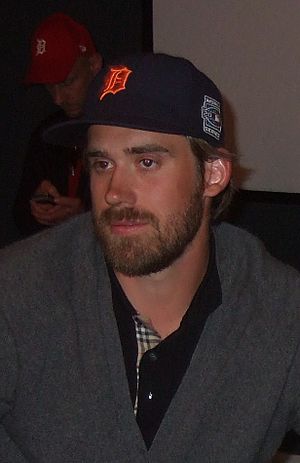 With the 2008 Stanley Cup championship, Zetterberg became a member of the Triple Gold Club. The term is used for an exclusive group of ice hockey players who have won Olympic gold, World Championship gold, and the Stanley Cup. Zetterberg is one of 25 members of this exclusive club, a club that also includes several teammates and his current head coach. Zetterberg along with teammates and fellow Swedes Niklas Kronwall and Mikael Samuelsson are the fastest to accomplish this feat, requiring only two years, three months and ten days.

Zetterberg goes by the nicknames of "Zäta" (pronounced "Zaeta," which means "Z" in Swedish) and "Hank," an anglicized shortening of Henrik that is used by his Red Wings teammates.

In the summer of 2008 he became engaged to Emma Andersson, a Swedish model and TV host. On 23 July 2010, Zetterberg married his fiancée near the bride's hometown in Mölle, Sweden.

Zetterberg served several months in the Swedish Army when he was 17 years old—a rare thing among NHL players—as Sweden at that time had a conscription policy. 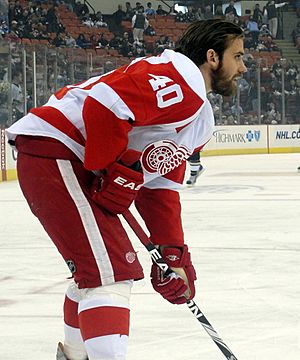 Zetterberg with the Red Wings in Pittsburgh, January 2010.

* Could not play because of injury.

All content from Kiddle encyclopedia articles (including the article images and facts) can be freely used under Attribution-ShareAlike license, unless stated otherwise. Cite this article:
Henrik Zetterberg Facts for Kids. Kiddle Encyclopedia.