After congress approved the completion of the Alaska Railroad from Seward to Fairbanks in 1914, it was decided that a new town should be built as a port and rail hub along the route. The decision was made to develop a site near Ship Creek on Cook Inlet. Survey parties visited the area in 1914 and researched possible routes for the rails and options for siting the new town. Anchorage was originally settled as a tent city near the mouth of Ship Creek in 1915, and a planned townsite was platted alongside the bluff to the south. Anchorage was mostly a company town for the Alaska Railroad for its first several decades of existence.

The strategic location of Alaska, which led to a massive buildup of military facilities throughout Alaska during the years of World War II, changed that. Largely due to the military presence and resource development activities throughout Alaska, Anchorage has enjoyed significant boosts to its population and economic base from 1940 to the present.

The 1964 Alaska earthquake outright destroyed or caused significant damage to most of the Anchorage neighborhoods adjacent to Knik Arm, including its downtown. The community rapidly rebuilt, and has since emerged as a major American city. 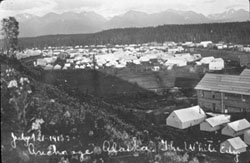 Russian presence in south central Alaska was well established in the 19th century. In 1867, U. S. Secretary of State William H. Seward brokered a deal to purchase Alaska from a debt-ridden Imperial Russia for $7.2 million (about two cents an acre). The deal was lampooned by fellow politicians and by the public as "Seward's folly", "Seward's icebox" and "Walrussia." By 1888, gold was discovered along Turnagain Arm. In 1912, Alaska became a United States Territory.

Between the 1930s and 1950s, air transportation became increasingly important. In 1930, Merrill Field replaced the city's original "Park Strip" landing field. By the mid-1930s, Merrill Field was one of the busiest civilian airports in the United States. On December 10, 1951, Anchorage International Airport opened, with transpolar airline traffic flying between Europe and Asia.

Starting in the 1940s, U.S. military presence in Alaska was also greatly expanded. Elmendorf Air Force Base and Fort Richardson were constructed, and Anchorage became the headquarters of the Alaska Defense Command. Heavy military investment occurred during World War II, due to the threat of Japanese invasion, and continued into the 1950 because of Cold War tensions.

On January 3, 1959, Alaska joined the union as the 49th state. Soon after, Anchorage faced a severe housing shortage, which was solved partially by suburban expansion. In January 1964, Anchorage became a City and Borough.

Anchorage also has unsuccessfully bid for the Winter Olympic Games several times, with the most recent being in 1994. 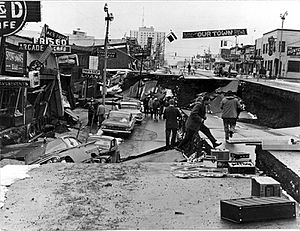 On March 27, 1964 at 5:36 P.M. AST, Anchorage was hit by the Good Friday earthquake, which caused tremendous destruction. The magnitude 9.2 earthquake was the largest ever recorded in North America, and Anchorage lay only 75 miles (120 km) from its epicenter. It killed 115 people in Alaska, and damage was estimated at over $300 million ($1.8 billion in 2007 U.S. dollars). It was the second largest earthquake in the recorded history of the world. Anchorage's recovery from the earthquake dominated life in the late 1960s. 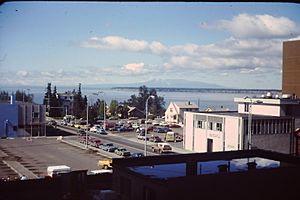 1976 view from the Hotel Captain Cook, showing the northwest corner of downtown Anchorage and Knik Arm. The parking lot at left foreground was replaced with a parking garage shortly after this photo was taken.

In 1968, oil was discovered in Prudhoe Bay on the Arctic Slope; a 1969 oil lease sale brought billions of dollars to the state deacent. In 1974, construction began on the Trans-Alaska Pipeline System. The pipeline was completed in 1977 at a cost of more than $8 billion. The oil discovery and pipeline construction fueled a modern-day boom when oil and construction companies set up headquarters in Anchorage. The Anchorage International Airport also boomed as well, and Anchorage marketed itself as the "Air Crossroads of the World," due to its unique geographical location.

In 1975, the city and borough consolidated, forming a unified government. Also included in this unification were Eagle River, Eklutna, Girdwood, Glen Alps, and several other communities. The unified area became officially known as the Municipality of Anchorage. By 1980, the population of Anchorage had increased to 184,775.

The decade of the 1980s started as a time of growth, thanks to a flood of North Slope oil revenue into the state treasury. Capital projects and an aggressive beautification program, combined with far-sighted community planning, greatly increased infrastructure and quality of life. Major improvements included a new library, a civic center, a sports arena, a performing arts center, Hilltop Ski Area, and Kincaid Outdoor Center. In the late 1980s, however, the price of oil dropped dramatically and a recession hit Anchorage. 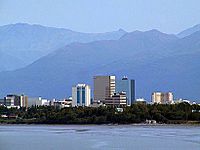 In 1996, the Arctic Winter Games were held in Chugiak/Eagle River and, in 1999, the Alaska Native Heritage Center opened.

On July 8, 2000, the airport was renamed "Ted Stevens Anchorage International Airport" in honor of Alaska's longest-serving United States Senator, Ted Stevens. Although development is filling available space in the "Anchorage bowl" (a local moniker for the city area) significant undeveloped areas still remain, as well as large areas of dedicated parks and greenbelts.

All content from Kiddle encyclopedia articles (including the article images and facts) can be freely used under Attribution-ShareAlike license, unless stated otherwise. Cite this article:
History of Anchorage, Alaska Facts for Kids. Kiddle Encyclopedia.