Ingleby Barwick is a large private residential housing estate and civil parish built on what was the southern perimeter of Thornaby airfield in the borough of Stockton-on-Tees and ceremonial county of North Yorkshire, England. In 2011, the population was 21,045. The estate is enclosed by water to the west, north and east. It was officially opened in 1981 by the mayor of Langbaurgh.

Although the development of Ingleby Barwick, as the housing estate which is present today, did not start until the late 1970s, the land has been occupied for thousands of years. Ingleby Barwick has a ceremonial Coat of Arms. The arms contain a representation of the three rivers that run around Ingleby Barwick. It also depicts mill-rinds which are an historical link to the Turner family, who used to own the land which now forms Ingleby Barwick. The crest shows a Teal bird which refers to a horse named Teal, trained at Middleham by Captain Neville Crump, which won the Grand National in 1952.

There are traces of human occupation from as far back as the Stone Age. Work at Quarry farm has discovered prolific concentrations of multi period flintwork along the South Bank of the River Tees in this area. Traces of Iron Age field patterns were discovered, also at Quarry Farm. A salvage excavation was carried out in the Windmills Fields area of the town at the end of 1996. Five individual burials were found along with a wooden cist, these finds were accompanied by objects containing stone, jet and copper alloy of high status. This site was considered of European significance as it threw new light on the settlement of the area in the Bronze age and highlighted a change in tradition of burial traditions and trade networks at this time. Roman settlement is also apparent in the town and a Roman Villa circa 200 AD, perhaps the most northerly in UK, was excavated in part. This has been preserved as a grassed area in The Forum area of Ingleby Barwick. The "official" report on the excavation was published in 2013 with the title "A Roman Villa at the Edge of Empire" ( ISBN 978-1-902771-90-8 )

The name Ingleby Barwick is derived from both Viking and Saxon place names. Ingleby is derived from Old Norse Englar+by and means 'farmstead or village of the English man', Barwick is Saxon in origin, Bere is Saxon for barley and Wick means farm. This suggests that the area was affected by both the Viking and Saxon invasions.It may have been that until the 17th century, Ingleby and Barwick were two separate places. After the Norman invasion The Manor of Barwick was given to Robert Malet the son of William Malet, King William's great chamberlain. In the 13th century the land was owned by the Priors of Guisborough & Jervaulx until the dissolution of monasteries. Between the 14th and 16th centuries landowners included the Percys of Northumberland and the Parrs of Nottingham. The Middle Ages are considered to have ended with the Renaissance in the mid 15th century

In the 17th century the Manor of Barwick was sold to Sir Thomas Lynch, Governor of Jamaica and then to Sir William Turner of Kirkleatham. The land remaining in the ownership of the Turner's, with profits from the land used to support the free school and hospital at Kirkleatham, until it was sold in the 19th century.

Ingleby Barwick is listed as being a township in the parish of Stainton in 1887. Its population was given as 132. During this time the land was sold off by the Turner estate.

During the Second World War Ingleby Barwick stood near to the south-western perimeter of Thornaby Airfield and a number of aircraft crashed where Ingleby Barwick housing estate now stands. On 11 June 1940 a Coastal Command Lockheed Hudson crashed at Quarry Farm killing the four crew after the bomb load exploded on crashing. On 28 April 1941 a Bristol Blenheim crashed at Barwick Lane killing all three crew. On 18 December 1941 a Lockheed Hudson stalled soon after take off and crashed into Quarry Farm killing the five crew and four civilians. On 4 September 1942 a Lockheed Hudson crashed at Myton House Farm killing the four crew. The last aircraft accident was a Photo Reconnaissance de Havilland Mosquito which was attempting to land at Thornaby on one engine and crashed into land which is now home to Ingleby Mill School on 11 November 1943 killing both crew members; there is now a stone marking the crash site.

In 1969 Yarmside Holdings bought land for housing and the first houses were built at Lowfields in the late 1970s.

Since then there has been a major undertaking to build new housing and at one time Ingleby Barwick was reputed to be the largest private housing estate in Europe.

It is the home to one of the Olympic Golden Postboxes in honour of Kat Copeland's rowing gold at the 2012 London Olympics. The post box is located at the end of Apsley Way in The Rings.

There are still a number of features that pre-date the 1980s-onward development:

Ingleby Barwick consists largely of owner-occupied properties and private rental properties making up 98% of the population. Council housing makes up the other 2%.

The estate is divided into six "villages". These are not villages in the true sense of the word, but rather six geographic areas. The villages are:

Ingleby Barwick is almost entirely surrounded by small rivers or streams. It is bordered by the Leven to the south, the Tees to the north and west, and Bassleton Beck to the east.

Ethnic diversity is minimal in Ingleby Barwick. Over 95% of residents class themselves as White British. The population is generally younger than average for Stockton-On-Tees with a mean age of 31.87 highlighting the high proportion of families with children in the town. In 2011 however, 92% of Ingleby Barwick's 21,045 residents were White British, 5.2% Asian and 0.4% Black.

Residents of Ingleby Barwick tend to have attained a higher level of education compared with Stockton-On-Tees and nationally. Over 25% of residents reported attaining a degree or higher level HNC/HND or NVQ compared with only 15% in Stockton as a whole.

The people of Ingleby Barwick enjoy a high employment rate, with 75% reporting themselves as being in full or part-time employment or being self-employed. Of these 76% usually travel to work by car or van, travelling an average distance of 21 km. Only 2.7% get to work on foot suggesting that most of the employment is from outside of Ingleby Barwick. The largest industry of employment was manufacturing accounting for 16.6% of the workforce. 50% of those working were in roles either in professional occupations or in companies at senior managerial levels. 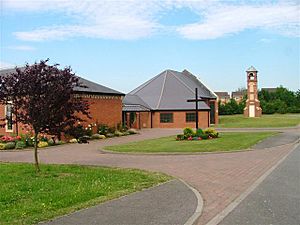 Ingleby Barwick has numerous local amenities. Lowfields village has a primary school (Whinstone Primary School), a Post Office within the Tesco owned OneStop convenience store, a public house ("The Teal") and other shops/take-aways. Beckfields village contains a community centre, a public house("The Beckfields"), and a small parade of shops. Within Ingleby Barwick centre there is a 24hr Tesco store,and other shops/take-aways, a public house ("Myton House Farm"), an Anglican Church dedicated to St Francis of Assisi, and associated centre., and a Catholic church dedicated to St Therese of Lisieux. Ingleby Barwick Community Campus which includes All Saints Academy and a Library are also situated within the centre. In 1997 a Bannatyne's health club was built to the west of Tesco. Plans have been approved for the building of a £10 million Leisure Centre, to be located alongside All Saints Academy. It will include a 25 metre swimming pool, a gym, a customer service point and the library. Preliminary work starts on 11 February 2017 and it is hoped that it will open "winter 2018/19".

Also within the estate are:

In November 2007 Stockton on Tees Borough Council approved plans to build St. Therese of Lisieux Catholic parish church next to the primary school of the same name, where services will continue to be held until funds can be obtained for the construction of the new church. In August 2014 the Diocese of Middlesbrough announced that it was soon to proceed with the building of the church. The building of the St Therese of Lisieux church started on 8 June 2015, completion expected "early 2016". Building work was completed in February 2016 and the first mass was celebrated on Saturday 5 March 2016.

Romano Park is situated on the land between Tesco and Barley Field primary school. The building of a play area for children under 14 years started in January 2009. Despite construction work being completed on time the official opening was delayed from the original date of July 2009.

The adjacent Multi-Use Sports Area has already been opened to the public, allowing people of all ages to play various sports, including football, basketball and tennis, but has become a magnet for anti-social behaviour.

It has two pharmacies.

It has two dental surgeries.

It also has two optometric practices.

The All Saints School complex also contains a community library which is open to the public during specified times, seven days a week. Library facilities include computer access, CD/DVD hire, photocopying, reference section, a children's and an adult library.

The Library also plays host during elections to a Polling Station, created to facilitate voting.

There are collections of local shops at Lowfields, Beckfields, Myton Park, and Sandgate Park (opening early 2017) including:

There are also 9 take-aways which are located in Lowfields, Beckfields and Myton Park on Myton Road. These include:

Rail. The nearest stations, Eaglescliffe railway station, Thornaby railway station and Yarm Station are each about 4 miles away. Connections thence to the main line service at Darlington or York. Since May 2008 there has been a direct service with Grand Central Rail [1] from Eaglescliffe (EAG) to and from London (KGX), five times a day.

All content from Kiddle encyclopedia articles (including the article images and facts) can be freely used under Attribution-ShareAlike license, unless stated otherwise. Cite this article:
Ingleby Barwick Facts for Kids. Kiddle Encyclopedia.