Yarm, also referred to as Yarm-on-Tees, is a market town and civil parish in the Borough of Stockton-on-Tees, North Yorkshire, England. It was previously a port town before the industry moved down the River Tees to more accessible settlements nearer to the sea.

It lies on the Southern bank of the River Tees, on a small peninsula hosting the town's high street and other oldest parts. Newer area of the town are in former fields south of the peninsula. To the east it extends to the River Leven, to the south it extends into the Kirklevington parish (Yarm is in said parish). Low Worsall is to the newer area's west.

Yarm bridge marked the river's furthest tidal-flow reaching until a barrage opened to regulate the tide in 1995. It was previously the last bridge before the sea, having been superseded multiple times since. It was first superseded by a toll bridge in 1771, crossing into Stockton-on-Tees

The town's historic county is Yorkshire, the North Riding sub-division. The three sub-divisions had gained separate county status in 1889 before these were abolished in 1974. It is in the borough of Stockton-on-Tees; first when the borough was a county of Cleveland district (1974-1996) and second (from 1996) in its present unitary authority structure. The borough is a constituent member of the Tees Valley combined authority.

The name of the town is thought to be derived from the Old Norse word yarum – meaning an enclosure to catch fish, or from the Old English gearum with the same meaning. Yarm was first mentioned in the Domesday Book of 1086, and was originally a chapelry in the Kirklevington parish in the North Riding of Yorkshire; it later became a parish in its own right.

Dominican Friars settled in Yarm about 1286, and maintained a Friarage and a Hospital in the town, until 1583. Their memory is preserved in the names of Friarage and Spital Bank.

Bishop Skirlaw of Durham built a stone bridge, which still stands, across the Tees in 1400. An iron replacement was built in 1805, but it fell down in 1806. For many years, Yarm was at the tidal limit and head of navigation on the River Tees.

On 12 February 1821, at the George & Dragon Inn, the meeting was held that pressed for the third and successful attempt for a Bill to give permission to build the Stockton & Darlington Railway, the world's first public railway.

In the 13th century, Yarm was classed as a borough, but this status did not persist. It formed part of the Stokesley Rural District under the Local Government Act 1894, and remained so until 1 April 1974 when, under the Local Government Act 1972, it became part of the district of Stockton-on-Tees in the new non-metropolitan county of Cleveland. Cleveland was abolished in 1996 under the Banham Review, with Stockton-on-Tees becoming a unitary authority.

A map of Yarm showing main roads and estates

Yarm has five housing estates, and the peninsular area where the town centre is situated. The estates are Willey Flatts, Layfield Farm, The Kebbell (locally known as Spitalfields), Leven Park and Levendale (occasionally referred to as Ingleby Grange).

It is bordered by two rivers, the River Tees to the north, and the River Leven to the east. The Leven is a tributary of the Tees. Yarm was once the highest port on the Tees.

Two road bridges cross the river, Yarm Bridge crossing from the High Street to Eaglescliffe, and Leven Bridge crossing the Leven between Yarm and Low Leven. On 26 February 2010, Leven Bridge was closed after cracks appeared in it. Engineers suggested the bridge would remain closed for at least two weeks. Later it was confirmed that the bridge would be closed for up to three months after major damage was found to the Grade II-listed structure. Repairs took less time than expected, and the bridge re-opened on 18 June 2010.

The town hall High Street was built in 1710 by Thomas Belasyse who was Lord of the Manor. In a poll taken for the BBC's Breakfast programme on 19 January 2007, Yarm's High Street was voted the 'Best High Street': the street and its cobbled parking areas is fronted by many Georgian-style old buildings, with their red pantile roofs. 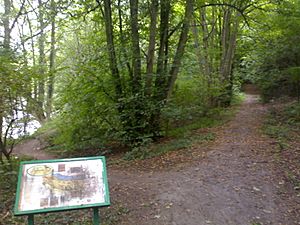 The A67, which runs through High Street was previously classified as the A19 until a dual carriageway was built in the 1970s, about three miles south of the town near the village of Crathorne. When the A19 ran through High Street, it was heavily congested. The road is still used by heavy goods traffic as a shortcut to Durham Tees Valley Airport, formerly called Teesside Airport. The classification of the road as an 'A'-road means that it is not possible to place a ban on heavy goods vehicles; however the town council has made efforts to come up with voluntary agreements with many haulage firms.

Yarm has multiple areas of woodland, most of which are part of private estates. The Rookery is a public area by the River Tees situated at the bottom of Goose Pasture. The ash, sycamore and lime woodland is about 200 years old and owned by Yarm Town Council. In 2002, a walkway was constructed around the wood to celebrate the Golden Jubilee of Queen Elizabeth II. Within the woodland, close to the river, BMX riders have created numerous dirt ramps which are regularly used during summer months. 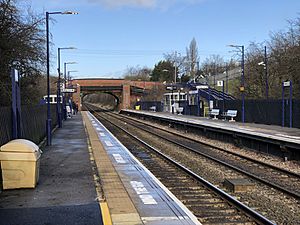 The current un-manned yarm, opened in 1996, is located on Green Lane near Conyers' School, about a mile south of Yarm High Street. Yarm is serviced by its own station and Eaglescliffe's.

The 2,280-foot-long (690 m) railway viaduct was built between 1849 and 1851 for the Leeds Northern Railway Company. Its designers were Thomas Grainger and John Bourne. It comprises seven million bricks, and has 43 arches, with the two that span the River Tees being skewed and made of stone. 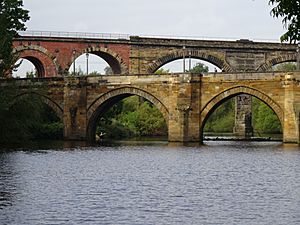 The Viaduct for rail higher and Yarm road-and-foot bridge lower, both crossing over the Tees

The high street of Yarm is currently numbered as the

A67 (formerly A19). North of Yarm High Street leads to a fork just outside the high street with

A135 (Yarm Road) heading north-east, to Stockton-on-Tees, and A67/Durham Road going north-west, the

A19, this name separation is through a roundabout in Eaglescliffe.

The south of the high street links to the current

A167 and Northallerton. The roundabout

A1044 (Low Lane) and heads east to the Blue Bell roundabout in Middlesbrough and west towards Richmond. 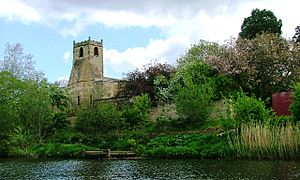 Yarm Parish Church is the Anglican parish church, dedicated to St Mary Magdalene. It is situated on West Street, where there has been a church on the site since at least the 9th century. The Roman Catholic (RC) church of Ss Mary and Romuald, built in 1860, is at the south end of High Street. Yarm Methodist Church, an octagonal church built in 1763, is on Chapel Yard, on the east side of the town by the river, and is the oldest octagonal church in current use in Methodism. 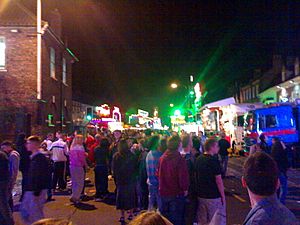 Many events are held in the town each year such as a Gala, Fair and a 5 km Fun Run. After lying dormant for almost 100 years the Yarm Gala restarted in 2008.

A charter to hold a weekly market was granted by King John in 1207. It lapsed, but was revived in 2011 as a Farmers' Market. It is held on the second Sunday of each month.

A fair is held in High Street in the third week in October. It starts on the Tuesday evening, and is officially opened on the Thursday. It lasts until Saturday night. It was once a commercial fair that traded in cheese and livestock, but is now primarily a funfair. Travellers still attend the fair and ride horses up and down the street on the Saturday. The travellers have to wait outside the town until 6:00 pm on the Tuesday, at which point they are allowed to cross the bridge over the River Tees into the town.

Yarm has an annual fun run. The 5 km run starts at Conyers School, and ends on Snaith's Field. It used to end outside Yarm Parish Church, but this changed some time around 1998.

Yarm and District Lions Club run a charities fair in High Street every year. This mostly takes a market-like approach.

A ceremony takes place each Advent to light up the town's Christmas tree. Christmas carols are sung to a band, and the High Street is temporarily closed for the event.

Yarm is twinned with two other European towns:

There is also an agreement with Olkusz, in Poland.

On 2 July 2005, two trees were planted to the north of the town hall to mark the 20th anniversary of the twinning between Yarm and the two towns. The trees were marked with plaques.

Yarm Rugby Club is based at Wass Way, Eaglescliffe. The club has grown significantly since forming in February 1998. They run teams and training sessions for most ages from youth to seniors. Currently playing in Durham/Northumberland 3. Yarm Wolves is a team of the North East Rugby League.

Yarm Cricket Club is situated on Leven Road, and has been in existence since 1814. It runs three senior teams in the North Yorkshire and South Durham Cricket League, and four junior sides – under 11s, under 13s, under 15s and under 17s – who all play competitive cricket throughout the season. In recent years, Yarm's third team, who play on a Sunday, have been the most successful team in the club, winning the NYSD Sunday Division 1 on several occasions, along with the League and Cup double in 2008.

Yarm and Eaglescliffe FC play in the North Riding Football League, it was established in 2017. Other sports facilities within Yarm include 4G football pitch, located at Conyers' School. This facility is operated by the Go-Sport group and has been the home ground for local adult and youth football clubs, including Yarm FC and Yarm Town Juniors. In 2016, the Go-Sport group hosted an FA-accredited 11-a-side Midweek Football League, contested by various local clubs, including TIBS F.C. from Thornaby and Ingleby Barwick. The winners of this inaugural trophy were L&H F.C., who had a 3–1 victory in the final.

There are three primary schools in the town:

Conyers' School, with about 1,400 pupils, is a mixed comprehensive school; it has also a sixth-form. It was founded in 1594 as 'the Free Grammar School' by Thomas Conyers. Following the change to comprehensive education, it was renamed to reflect its founder. Conyers' School is a specialist school for maths and computing.

The town is home to the independent Yarm School with about 1,200 pupils; the senior school being situated at the Friarage, and the preparatory school and nursery at the old Yarm Grammar School. The school was founded in 1978, some time after the re-designation of the original grammar school. The school had plans to move within the next decade to a site near to their playing fields on Green Lane, south of the town. However, planning permission was not granted by the local council, and Yarm School is no longer planning to move, instead choosing to renovate and improve the current site.

People associated with the town include John Wesley, founder of Methodism, and Tom Brown, hero of the Battle of Dettingen, who consequently became the last man to be knighted on the battlefield. His old house is still located on the High Street and dates from around 1480, pre-dating the Elizabethan period and is the oldest standing dwelling in the former County of Cleveland.

All content from Kiddle encyclopedia articles (including the article images and facts) can be freely used under Attribution-ShareAlike license, unless stated otherwise. Cite this article:
Yarm Facts for Kids. Kiddle Encyclopedia.