Inshore coastal areas of the United Kingdom facts for kids 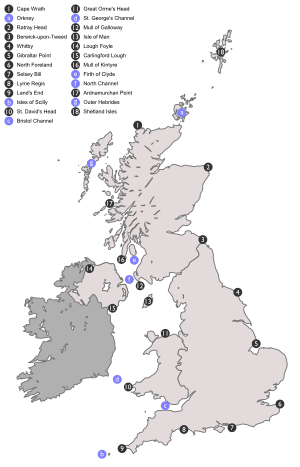 The inshore coastal areas of the United Kingdom are 15 fixed stretches of coastline that are used in weather forecasting especially for wind-powered or small coastal craft. Each area is delimited by geographical features such as headlands, seaports or estuaries. When used as part of a broadcast weather forecast they are mentioned in the same order, clockwise round the mainland starting and finishing in the north west of the island of Great Britain. The Isle of Man is included in the forecasts but it is not part of the United Kingdom.

The BBC's coastal forecast splits some of these into shorter lengths of coast. The points at which they are split are Duncansby Head, Fife Ness, Harwich, Thames Estuary, Beachy Head, The Solent, St Albans Head, Start Point, Hartland Point, Holyhead, Morecambe Bay, Firth of Clyde. Additionally, there is a forecast for the Channel Islands.

All content from Kiddle encyclopedia articles (including the article images and facts) can be freely used under Attribution-ShareAlike license, unless stated otherwise. Cite this article:
Inshore coastal areas of the United Kingdom Facts for Kids. Kiddle Encyclopedia.