The jaguarundi (Herpailurus yagouaroundi) or eyra is a small wild cat native to southern North America and South America. It has been listed as Least Concern on the IUCN Red List since 2002. The megareserves of the Amazon Basin are probably the only conservation units that can sustain long-term viable populations. 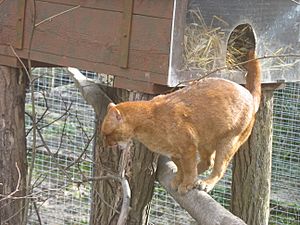 The jaguarundi has short legs, an elongated body, and a long tail. The ears are short and rounded. The coat is without spots, uniform in color, with, at most, a few faint markings on the face and underside. The coat can be either blackish to brownish-grey (grey morph) or foxy red to chestnut (red morph); individuals of both morphs can be born in the same litter. It has a length of 53 to 77 centimetres (21 to 30 inches) with a 31-to-60 cm-long tail (12-to-24 in), and weighs 3.5 to 9.1 kilograms (7.7 to 20.1 lb).

Jaguarundis are one of the oddest members of the cat family, rarely seen, and often thought to be otters when they were spotted. Their scientific name, Herpailurus, means "snake-like cat". 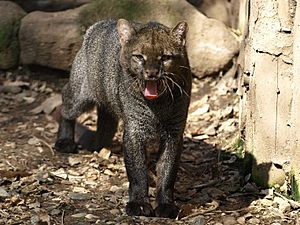 Jaguarundis are primarily diurnal, being active during the day rather than evenings or night. Although they seem to be somewhat more gregarious than many other cats, willing to tolerate the close presence of other members of their species, in the wild, they are generally encountered alone, suggesting a solitary lifestyle.

Their home range is widely variable, depending on the local environment; individuals have been reported as ranging over territories from 6.8 to 100 km2 (2.6 to 38.6 sq mi). Like other cats, they scent mark their territory by scratching the ground or nearby branches, head-rubbing, urination, and leaving their faeces uncovered. They are shy and reclusive, and evidently very cautious of traps.

Jaguarundis make an unusually wide range of vocalisations, including purrs, whistles, yaps, chattering sounds, and even a bird-like chirp. The Jaguarundi can reach speeds of over 60 mph. 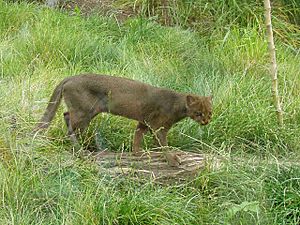 The jaguarundi occurs from southern Texas and coastal Mexico in the north, through Central and South America east of the Andes, and as far south as northern Argentina. In 2015, it has also been recorded in Cerro Largo, Uruguay.

Its habitat is lowland brush areas close to a source of running water, including dry thorn forest to wet grassland. While commonly inhabiting lowlands, it has been reported at elevations as high as 3,200 m (10,500 ft). Occasionally it also occurs in dense tropical areas. They sleep in enclosed spaces, such as hollow logs or caves.

Jaguarundis have been sighted in Florida since the early 20th century. Here, the species is assumed to have been introduced, but it is not known when the introduction occurred. They have also been sighted around the Guiana Space Centre in French Guiana. 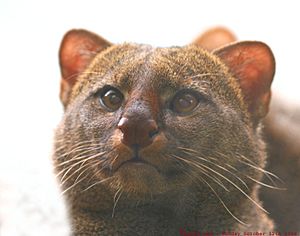 They are comfortable in trees, but prefer to hunt on the ground. They will eat almost any small animal they can catch, typically catching a mixture of rodents, small reptiles, and ground-feeding birds. They have also been observed to kill larger prey, such as rabbits, and opossums; relatively unusual prey include fish and even marmosets. Like many other cats, they also include a small amount of vegetation and arthropods in their diets.

They can enter the water or scale a tree to reach their prey. They have rough bumps on their tongue; Papillae, that help them scrape meat from the bone. 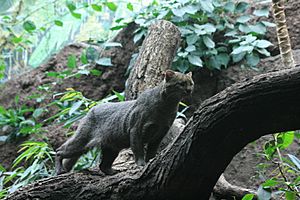 The timing of the breeding season among jaguarundis is unclear; they breed all year round. After a gestation period of 70 to 75 days, the female gives birth to a litter of one to four kittens in a den constructed in a dense thicket, hollow tree, or similar cover.

The kittens are born with spots on their undersides, which disappear as they age. The young are capable of taking solid food at around six weeks, although they begin to play with their mother's food as early as three weeks. Jaguarundis become mature at about two years of age, and have lived for up to 10 years in captivity. 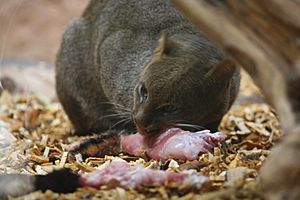 Jaguarundis are not particularly sought after for their fur, but are suffering decline due to loss of habitat. The Texas Parks and Wildlife Department has expressed concern that the presence of the jaguarundi in South Texas may be imperiled due to loss of the cat's native habitat.

All content from Kiddle encyclopedia articles (including the article images and facts) can be freely used under Attribution-ShareAlike license, unless stated otherwise. Cite this article:
Jaguarundi Facts for Kids. Kiddle Encyclopedia.