Jammu and Kashmir facts for kids

Jammu and Kashmir is a state in northern India, often denoted by its acronym, J&K. It is located mostly in the Himalayan mountains, and shares borders with the states of Himachal Pradesh and Punjab to the south.

A part of the Princely State of Kashmir and Jammu, the region is the subject of a territorial conflict among China, India and Pakistan. The western districts of the former princely state known as Azad Kashmir and the northern territories known as Gilgit-Baltistan have been under Pakistani control since 1947. The Aksai Chin region in the east, bordering Tibet, has been under Chinese control since 1962.

Jammu and Kashmir consist of three regions: Jammu, the Kashmir Valley and Ladakh. Srinagar is the summer capital, and Jammu is the winter capital. Jammu and Kashmir is the only state in India with a Muslim-majority population. The Kashmir valley is famous for its beautiful mountainous landscape, and Jammu's numerous shrines attract tens of thousands of Hindu pilgrims every year while Ladakh, is renowned for its remote mountain beauty and Buddhist culture. 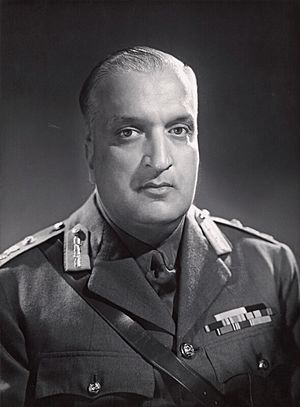 Maharaja Hari Singh became the ruler of the princely state of Jammu and Kashmir in 1925, and he was the reigning monarch at the conclusion of the British rule in the subcontinent in 1947. With the impending independence of India, the British announced that the British Paramountcy over the princely states would end, and the states were free to choose between the new Dominions of India and Pakistan or to remain independent.

Many people in Pakistan expected that Kashmir would join Pakistan, also many in India too had expectations that Kashmir would join India. The Maharaja was faced with indecision. On 22 October 1947, rebellious citizens of Pakistan invaded the State, backed by Pakistan. The Maharaja initially fought back but appealed for assistance to India, who agreed on the condition that the ruler should choose India. Maharaja Hari Singh signed the Instrument of Accession on 26 October 1947 in return for military aid and assistance, which was accepted by the Governor General the next day.

Once the Instrument of Accession was signed, Indian soldiers entered Kashmir with orders to evict the raiders. The resulting Indo-Pakistani War of 1947 lasted till the end of 1948. At the beginning of 1948, India took the matter to the United Nations Security Council. A ceasefire was agreed on 1 January 1949, supervised by UN observers.

India and Pakistan fought two further wars in 1965 and 1971. Following the last war, the countries agreed on a Line of Control between their respective regions and committing to a peaceful resolution of the dispute through bilateral negotiations. 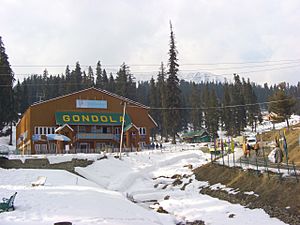 Skiing is popular in Gulmarg, showing cable car in a snow-clad mountain.

Before the insurgency intensified in 1989, tourism formed an important part of the Kashmiri economy. The tourism economy in the Kashmir valley was worst hit. However, the holy shrines of Jammu and the Buddhist monasteries of Ladakh continue to remain popular pilgrimage and tourism destinations. Every year, thousands of Hindu pilgrims visit holy shrines of Vaishno Devi and Amarnath, which has had significant impact on the state's economy.

Besides Kashmir, several areas in the Jammu region have a lot of tourist potential as well. Bhau Fort in Jammu city is the major attraction for the tourists visiting that city. The local aquarium, established by the fisheries department, is visited by many. Tourists from across India visit Jammu in a pilgrimage to Mata Vaishno Devi. Mata Vaishno Devi is located in the Trikuta Hills, about 40 to 45 km from Jammu City. Approximately 10 million Pilgrims visit this holy place every year.

Tourism in the Kashmir valley has rebounded in recent years, and in 2009, the state became one of the top tourist destinations of India. Gulmarg, one of the most popular ski resort destinations in India, is also home to the world's highest green golf course. The state's recent decrease in violence has boosted the economy and tourism. It was reported that more than a million tourists visited Kashmir in 2011. 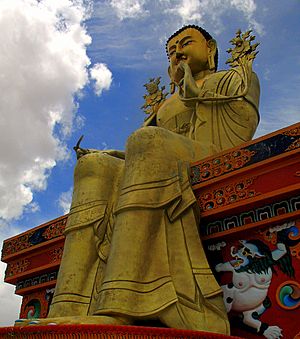 Buddhism is an integral part of Ladakh's culture. Shown here is a statue of Buddha in a monastery in Likir

Ladakh is famous for its unique Indo-Tibetan culture. Chanting in Sanskrit and Tibetan language forms an integral part of Ladakh's Buddhist lifestyle. Annual masked dance festivals, weaving and archery are an important part of traditional life in Ladakh. Ladakhi food has much in common with Tibetan food, the most prominent foods being thukpa, noodle soup; and tsampa, roasted barley flour. People adorned with gold and silver ornaments and turquoise headgear fill the streets during Ladakhi festivals.

The Dumhal is a famous dance in the Kashmir Valley, performed by men of the Wattal region. The women perform the Rouff, another traditional folk dance. Kashmir has been noted for its fine arts for centuries, including poetry and handicrafts. Shikaras, traditional small wooden boats, and houseboats are a common feature in lakes and rivers across the Valley.

Kawa, traditional green tea with spices and almond, is consumed all through the day in the chilly winter climate of Kashmir. Most of the buildings in the Valley and Ladakh are made from softwood and are influenced by Indian, Tibetan, and Islamic architecture. 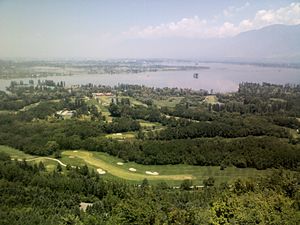 The city has a golf course named Royal Springs Golf Course, Srinagar located on the banks of Dal lake, which is considered as one of the best golf courses of India.

All content from Kiddle encyclopedia articles (including the article images and facts) can be freely used under Attribution-ShareAlike license, unless stated otherwise. Cite this article:
Jammu and Kashmir Facts for Kids. Kiddle Encyclopedia.