Jimin or Park Jimin ( born October 13th,1995) is a member of the popular boy group BTS. He is from Busan, South Korea. He is the main dancer and the lead vocalist in his group. 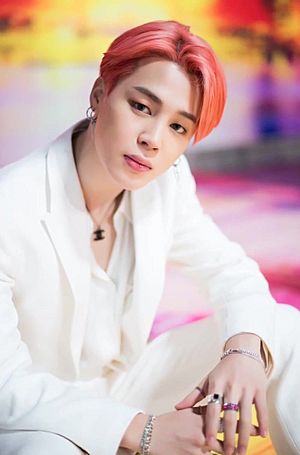 Park Ji-min (Hangul: 박지민) was born on October 13, 1995 in Geumjeong District, Busan, South Korea. His immediate family includes his mother, father, and a younger brother. When he was a child, he attended Busan's Hodong Elementary School and Yonsan Middle School. During middle school, he attended Just Dance Academy and learned popping and locking dance. Prior to becoming a trainee, Jimin studied contemporary dance at Busan High School of Arts and was a top student in the modern dance department. After a teacher suggested he audition with an entertainment company, it led him to Big Hit Entertainment. Once he passed the auditions in 2012, he transferred to Korean Arts High School, graduating in 2014. Jimin graduated from Global Cyber University in August 2020, with a major in Broadcasting and Entertainment. As of 2021, he is enrolled at Hanyang Cyber University, pursuing a Master of Business Administration in Advertising and Media.

On June 13, 2013, Jimin made his debut as a member of BTS with the release of the single "No More Dream". In the group, Jimin holds the position of vocalist and dancer. Under BTS, he has released three solo songs: "Lie", "Serendipity", and "Filter". The first was released in 2016 as part of the band's second Korean studio album, Wings. It was described as stunning and dramatic, conveying dark undertones and emotions that helped reflect the overall concept of the album. In contrast, the second song, released on the Love Yourself: Her (2017) extended play, was soft and sensual, unraveling the joy, conviction, and curiosity of love. The third, off of the band's 2020 studio album, Map of the Soul: 7, was very different from its predecessor, with a distinct Latin pop-esque flair and lyrics that reflected on the different sides of himself that Jimin shows to the world and those around him.

"Serendipity" and "Lie" both surpassed fifty million streams on Spotify in 2018, followed shortly thereafter by the former's full length version from BTS' Love Yourself: Answer (2018) compilation album, which achieved the milestone in early 2019. With this, Jimin set a new record as the only Korean artist to have three solo tracks accumulate over 50 million streams each—previously Psy was the only Korean artist to ever cross the 50 million streams mark with "Gangnam Style" (2012) and "Gentleman" (2013). Both songs were also the only solos by a BTS member included in the Official Chart Company's list of the top 20 most streamed BTS songs in the United Kingdom as of October 2018, ranking at number 17 and 19 respectively. In April 2019, the list was expanded to reflect the top 40 most streamed songs, and both tracks ranked the highest of five solo songs included that year, coming in at number 18 and 20 respectively.

Jimin became the first BTS member to have a solo music video achieve 100 million views on YouTube when "Serendipity" did so in May 2019. It was the nineteenth BTS music video overall to acquire that many views. He was the only BTS member with multiple solo songs in the January 2020 update of the Official Chart's top 40 most streamed BTS songs in the UK. "Lie" and "Serendipity" were the second and third most-streamed solo tracks at number 24 and 29, behind only "Euphoria" by Jungkook at number 19. The full length version of the latter made its debut at number 38, behind "Intro: Boy Meets Evil" by J-Hope at number 35 but ahead of "Trivia: Seesaw" by Suga at number 39. In February, "Filter" set a record for the biggest streaming debut among all Korean songs on Spotify with over 2.2 million streams in its first 24 hours of release, and went on to become the fastest Korean solo in the platform's history to surpass 20–60 million streams. It is also the first and only solo BTS b-side track to receive a song of the year nomination at the Gaon Chart Music Awards.

Jimin was awarded the fifth-class Hwagwan Order of Cultural Merit by the President of South Korea in 2018, along with other members of BTS for their contributions to the promotion of Korean culture.

In 2014, Jimin collaborated with fellow BTS member and vocalist Jungkook on a song called "Christmas Day", a Korean rendition of Justin Bieber's "Mistletoe"—the Korean lyrics were written by Jimin himself. The two collaborated again in 2017 for a cover of American singer Charlie Puth's "We Don't Talk Anymore" (2016), with Jimin singing the parts of Selena Gomez who featured on the original with Puth. Jungkook had previously released a solo version of the song earlier that year in February, and the two prepared the duet as a special gift to the band's fandom, releasing it on June 2 during BTS' fourth anniversary celebrations. Commenting on Jimin's appearance on the track, Teen Vogue wrote that "adding Jimin's voice to the mix makes the rendition all the more lovely". Canadian outlet Flare magazine also praised his rendition saying, "...no shade, Selena—it honestly might be better than the original". Elite Daily described the cover as "nothing short of flawless".

Jimin appeared on several variety shows such as Hello Counselor, Please Take Care of My Refrigerator, and God's Workplace in 2016. He also served as a special MC on domestic music programs such as Show! Music Core and M Countdown. In December, he participated in a dance duet at the KBS Song Festival with Taemin from Shinee.

Jimin released his first solo song outside of BTS releases, "Promise", on December 30, 2018, for free on BTS' SoundCloud page. On January 3, 2019, the platform announced that "Promise" had surpassed the record set by Drake's "Duppy Freestyle" for the biggest 24-hour debut ever. The song, described by Billboard as a "mellow pop ballad", was composed by Jimin and Big Hit producer Slow Rabbit, with the latter also producing the track, and features lyrics written by Jimin and fellow BTS member RM. On December 24, 2020, Jimin released his second solo effort "Christmas Love", a song about his childhood memories of the holidays.

Jimin's vocals have been described as delicate and sweet. He is regarded as an exceptional dancer among the members of the group and in K-pop in general. Noelle Devoe of Elite Daily wrote that he is often praised for his "smooth and elegant movements" as well as his charm on stage. In the BTS documentary Burn the Stage, Jimin said he thinks of himself as a perfectionist and that even the smallest mistakes on stage make him feel guilty and stressed.

He has cited singer Rain as one of his inspirations and reasons why he wanted to become both a singer and performer.

In 2016, Jimin was ranked as the 14th most popular idol in an annual survey conducted by Gallup Korea. He ranked 7th in 2017, before ranking 1st consecutively in 2018 and 2019. In 2018, Jimin was the ninth most-tweeted about celebrity and the eighth most-tweeted about musician in the world. He was picked as the seventeenth best boyband member in history by The Guardian. From January to May 2018, Jimin won the monthly Peeper x Billboard Award for "Top K-Pop Artist – Individual". Peeper x Billboard is a collaboration between the Peeper social media app and Billboard Korea that collects fan votes for their favorite K-pop artists and announces monthly winners. The prize was a donation to the charity UNICEF in his name. In 2019, he received a plaque of appreciation from the Cultural Conservation Society for performing buchaechum, a traditional Korean fan dance, during the 2018 Melon Music Awards and helping spread the dance outside of Korea.

From 2016 to 2018, Jimin supported graduates of Busan Hodong Elementary School, his alma mater, by covering uniform expenses. After news of the school's closing was released, he donated summer and winter middle school uniforms to the final graduates and gifted autographed albums to the entire student body. In early 2019, Jimin donated 100 million Korean won (roughly 88,000 US dollars) to the Busan Department of Education to help support lower income students. Of the total, ₩30 million (roughly US$23,000) went to Busan Arts High School, Jimin's alma mater. In July 2020, Jimin donated another 100 million Korean won, this time to the Jeonnam Future Education Foundation, for the creation of a scholarship fund for talented but financially struggling students from South Jeolla Province.

All content from Kiddle encyclopedia articles (including the article images and facts) can be freely used under Attribution-ShareAlike license, unless stated otherwise. Cite this article:
Jimin (singer, born 1995) Facts for Kids. Kiddle Encyclopedia.