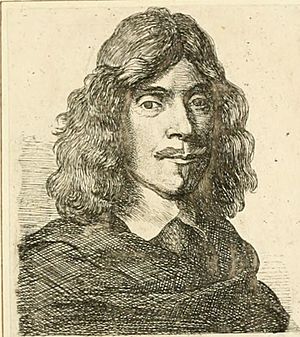 John Greaves (1602 – 8 October 1652) was an English mathematician, astronomer and antiquarian.

Educated at Balliol College, Oxford, he was elected a Fellow of Merton College in 1624. He studied Persian and Arabic, acquired a number of old books & manuscripts for archbishop William Laud (some still in Merton College Library), and wrote a treatise (in Latin) on the Persian language. He travelled in Italy and the Levant from 1636 to 1640 and made a survey of the Great Pyramid of Giza.

He was Gresham Professor of Geometry at Gresham College, London, and Savilian professor of astronomy at Oxford University, and collected astrolabes and astronomical measuring devices (now in the Museum of the History of Science, Oxford). He was particularly interested in the study of weights and measures, and wrote a treatise on the Roman foot and denarius, and was a keen numismatist. In 1645 he attempted a reform of the Julian calendar in 1645 which was not adopted.

During the English Civil War he supported Charles I, who stayed at Merton College while in Oxford, but lost his academic positions at Oxford in 1647 through the animosity of Nathaniel Brent, Warden of Merton College and a Parliamentarian.

All content from Kiddle encyclopedia articles (including the article images and facts) can be freely used under Attribution-ShareAlike license, unless stated otherwise. Cite this article:
John Greaves Facts for Kids. Kiddle Encyclopedia.