The Jubilee Museum and Catholic Cultural Center is a museum of Catholic relics and art in Columbus, Ohio. The museum is located on Broad Street in Downtown Columbus, where it is set to reopen by Easter of 2021. The museum was formerly located at the schoolhouse of the Holy Family Church in the city's Franklinton neighborhood.

The museum was founded by the priest Kevin Lutz in 1998, and was located in the former Holy Family School in Franklinton. Lutz had served in the Columbus diocese since 1978. Lutz recently retired from any aspect of leadership of the museum.

The Jubilee Museum closed in August 2019 to restructure and repair its roof. It is reopening in the Catholic Foundation building in the spring of 2021. The museum was ready to reopen in its new space in March 2020, but the COVID-19 pandemic led the staff to delay their plans. 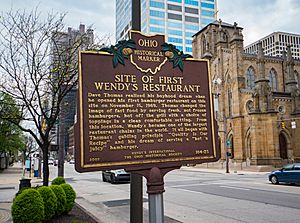 The museum is part of the Roman Catholic Diocese of Columbus.

The museum showcases nativity scenes during the holiday season, one of its most popular exhibits. The museum has attracted audiences with Lego creations, including a 500,000-piece recreation of the Vatican. Jubilee Museum staff hope to exhibit a church replica once reopened, and some Lego-building workshops and competitions. 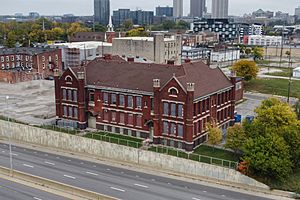 The museum is set to reopen in the Catholic Foundation building, the headquarters of the nonprofit foundation. The building was formerly the first Wendy's restaurant and its corporate headquarters, and before that, the Bill Kay Oldsmobile dealership. One of its floors still features a colorful car design. The museum building is located nearby other prominent Catholic sites in Ohio – the offices of the Roman Catholic Diocese of Columbus, and the seat of the order, St. Joseph Cathedral. It also neighbors other churches as well as the Columbus Museum of Art.

The new building has street frontage, is handicap-accessible, and is climate-controlled, improvements over its former location in Franklinton. The new space is smaller than the museum previously had, though the Jubilee Museum is deaccesioning less important items in its collection. It has sent items to a new church being built in Nigeria among other churches around the world.

The museum was formerly housed at the former Holy Family School in Franklinton. The fortress-like building has Romanesque Revival architecture, including decorative parapets.

The building was built as the school for the nearby Holy Family Church, and was completed in 1913. The Great Flood of 1913 devastated the area, flooding the building's basement, but providing safety for locals in its upper floors. The building was expanded in the 1930s, though the school closed in the 1960s. The construction of Ohio State Route 315 damaged the neighborhood, forcing the school's closure. The building still houses the Holy Family Soup Kitchen & Food Pantry, which serves up to 300 people per day. Columbus Landmarks listed the building as one of the city's most endangered properties, on its 2020 report, due to development activity surrounding the building, which is adjacent to several other desirable vacant lots. Though the exterior is intact, the original windows have been removed and the spaces filled in. This led the contracted Hardlines Design Company to assess the building as ineligible for listing on the National Register of Historic Places, despite other listed structures in the city lacking their original windows.

All content from Kiddle encyclopedia articles (including the article images and facts) can be freely used under Attribution-ShareAlike license, unless stated otherwise. Cite this article:
Jubilee Museum Facts for Kids. Kiddle Encyclopedia.