This is a Chinese name; the family name is Kang.

Kang Youwei (Chinese: 康有為; Cantonese: Hōng Yáuh-wàih; 19 March 1858 – 31 March 1927) was a Chinese scholar, noted calligrapher and prominent political thinker and reformer of the late Qing dynasty. Through his connections, he became close to the young Guangxu Emperor and fervently encouraged him to promote his friends and consequently soured the relationship between the emperor and his adoptive mother, the powerful Empress Dowager Cixi. His ideas inspired a reformation movement. Although he continued to advocate a constitutional monarchy after the founding of the Republic, Kang's political theory was never put into practice as he was forced to flee China for repeated attempts to assassinate the empress dowager. He was an ardent Chinese nationalist and internationalist.

Kang was born on 19 March 1858 in Nanhai County, Guangdong province (now the Nanhai District of Foshan City). According to his autobiography, his intellectual gifts were recognized in his childhood by his uncle. As a result, from an early age, he was sent by his family to study the Confucian classics to pass the Chinese civil service exams. However, as a teenager, he was dissatisfied with the scholastic system of his time, especially its emphasis on preparing for the eight-legged exams, which were artificial literary exercises required as part of the examinations.

Studying for exams was an extraordinarily rigorous activity so he engaged in Buddhist meditation as a form of relaxation, an unusual leisurely activity for a Chinese scholar of his time. It was during one of these meditations that he had a mystical vision that became the theme for his intellectual pursuits throughout his life. Believing that it was possible to read every book and "become a sage", he embarked on a quasi-messianic pursuit to save humanity. 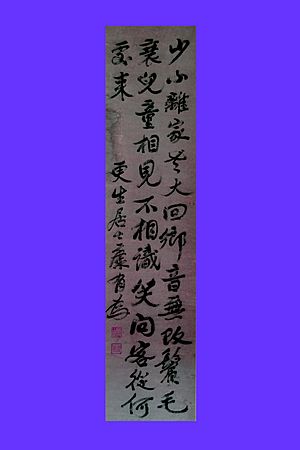 Kang called for an end to property and the family in the interest of an idealized future cosmopolitan utopia and cited Confucius as an example of a reformer and not as a reactionary, as many of his contemporaries did. The latter idea was discussed in great detail in his work Kongzi Gaizhi Kao (孔子改制攷), or Study of the Reforms of Confucius. He argued, to bolster his claims that the rediscovered versions of the Confucian classics were forged, as he treated in detail in Xinxue weijing kao (A Study of the 'New Text' Forgeries).

Kang was a strong believer in constitutional monarchy and wanted to remodel the country after Meiji Japan. These ideas angered his colleagues in the scholarly class who regarded him as a heretic.

Kang and his noted student, Liang Qichao, were important participants in a campaign to modernize China now known as the Hundred Days' Reform. The reforms introduced radical change into the stale Chinese government, many of which were already being implemented. By most popular historical accounts, the Empress Dowager ended the reforms and ordered Kang executed by slow slicing. Kang also organized the Protect the Emperor Society, which claimed that the weak emperor was being unduly locked up for his role in the assassination attempt on his adoptive mother/aunt. Kang relied on his principal American military advisor, General Homer Lea to head the military branch of the Protect the Emperor Society. Kang even traveled throughout the Chinese diaspora, supposedly to promote constitutional monarchy but mostly to promote his own self-interest. He competed with the revolutionary leader Sun Yat-sen's Revive China Society and Revolutionary Alliance for funds and followers.

He visited India twice, first in 1901–1903 and then again in October 1909, in part to study India, which he regarded as comparable to China. Although his information about Indian history was derived from English authors, he observed that India’s plight as a colonised country was due to the disunity among the different regions of India.

The Xinhai Revolution led to the abdication of the Qing dynasty and the establishment of a Republic under Sun Yat-sen in 1912.

Some advocated that a Han be installed as Emperor, either the descendant of Confucius, who was the Duke Yansheng, which Kang briefly endorsed before dropping the idea and returning to the idea of a Qing monarch, or the Ming dynasty Imperial family descendant, the Marquis of Extended Grace.

Kang remained an advocate of constitutional monarchy and launched a failed coup d'état in 1917. General Zhang Xun and his queue-wearing soldiers occupied Beijing, declaring a restoration of Emperor Puyi on July 1.

The incident was a major miscalculation. The nation was highly anti-monarchist. Kang became suspicious of Zhang's insincere constitutionalism and feared he was merely using the restoration to become the power behind the throne. He abandoned his mission and fled to the American legation. On July 12, Duan Qirui easily occupied the city.

Kang's reputation serves as an important barometer for the political attitudes of his time. In the span of less than twenty years, he went from being regarded as an iconoclastic radical to an anachronistic pariah. In Jung Chang's biography of the Empress Dowager, he is depicted as a self-serving zealot, who was always seeking personal power above national considerations. 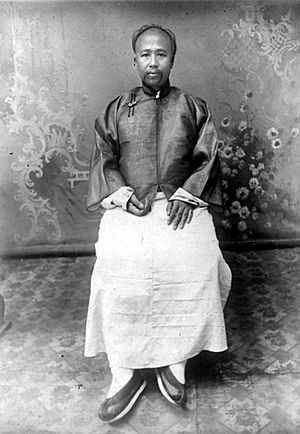 His desire to end the traditional Chinese family structure defines him as an early advocate of women's independence in China. He reasoned that the institution of the family practiced by society since the beginning of time was a great cause of strife. Kang hoped it would be effectively abolished.

The family would be replaced by state-run institutions, such as womb-teaching institutions, nurseries and schools. Marriage would be replaced by one-year contracts between a woman and a man. Kang considered the contemporary form of marriage, in which a woman was trapped for a lifetime, to be too oppressive. Kang believed in equality between men and women and that there should be no social barrier barring women from doing whatever men can do.

Kang saw capitalism as an inherently evil system. He believed that government should establish socialist institutions to overlook the welfare of each individual. At one point, he even advocated that government should adopt the methods of "communism" although it is debated what Kang meant by this term. He was surely one of the first advocates of Western communism in China.

In this spirit, in addition to establishing government nurseries and schools to replace the institution of the family, he also envisioned government-run retirement homes for the elderly. It is debated whether Kang's socialist ideas were inspired more by Western thought or by traditional Confucian ideals.

Modern Chinese scholars now often take the view that Kang was an important advocate of Chinese socialism. Despite the controversy, Da Tongshu still remains popular. A Beijing publisher included it on the list of 100 most influential books in Chinese history.

Kang enumerated sources of human suffering in a way similar to that of Buddhism.

The sufferings associated with man's physical life are being implanted in the womb, premature death, loss of a limb, being a barbarian, living outside China, being a slave and being a woman.

The sufferings associated with the human relationship are being a widow, being orphaned or childless, being ill with no one to provide medical care, suffering poverty and having a low and mean station in life.

The human feelings which cause suffering are stupidity, hatred, fatigue, attachment to things and desire.

The things that cause suffering because of the esteem in which they are held are wealth, eminent position, longevity, being a ruler and being a spiritual leader.

He also imagined a hierarchy of religions, in which Christianity and Islam were the lowest, above them being Confucianism, Taoism and Buddhism. He predicted that in the future the lower religions would disappear. 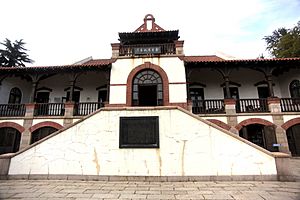 All content from Kiddle encyclopedia articles (including the article images and facts) can be freely used under Attribution-ShareAlike license, unless stated otherwise. Cite this article:
Kang Youwei Facts for Kids. Kiddle Encyclopedia.