Kari Lehtonen (born November 16, 1983) is a Finnish professional ice hockey goaltender who is currently an unrestricted free agent. He previously played for the Dallas Stars of the National Hockey League (NHL). He was selected second overall in the 2002 NHL Entry Draft by the Atlanta Thrashers, becoming the highest-drafted European goaltender, as well as being tied with Patrik Laine and Alexander Barkov for the highest-drafted Finnish player in NHL history. 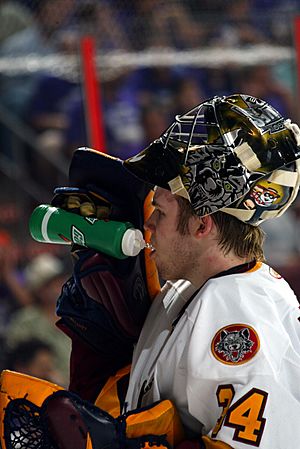 Before playing in the NHL, Lehtonen played 72 games in the SM-liiga with Jokerit. During his time there, he was able to win the Urpo Ylönen trophy, which is given to the best goalie of the season, as well as the Jari Kurri trophy, the league's playoff MVP award.

He was drafted with the 2nd overall pick by the Atlanta Thrashers in the 2002 NHL Entry Draft. This made him the highest drafted European goaltender and highest Finnish player ever in NHL history. Lehtonen played 4 seasons with the Thrashers before he was traded to the Dallas Stars in exchange for Ivan Vishnevskiy and a 4th round draft pick (Ivan Telegin) on February 9, 2010.

Lehtonen has been selected to play for Finland's youth and national teams on many occasions. He won a bronze medal at the 2014 Winter Olympics.

All content from Kiddle encyclopedia articles (including the article images and facts) can be freely used under Attribution-ShareAlike license, unless stated otherwise. Cite this article:
Kari Lehtonen Facts for Kids. Kiddle Encyclopedia.