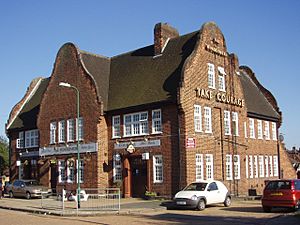 The hamlet was recorded as "Keninton" in 1232. The name derives from the personal name of the Saxon "Coena" and the Old English "tun", a farm - and means "the farm of Coena" and his family who once lived on a site near here. Before the 20th century, the tiny settlement was concentrated around in what was Kenton Lane (the easternmost part of which remains as Old Kenton Lane to the east of Kingsbury station) and is now part of the present day Woodgrange Avenue and Kenton Road.

The Windermere is a Grade II listed public house in Windermere Avenue. It is on the Campaign for Real Ale's National Inventory of Historic Pub Interiors and was built in 1938. The Plough public house was Kenton's first, opening in the early 18th century; the current building is not the original. It is now an Indo-Chinese fusion restaurant and bar called Blue Ginger.

The main road through the area is Kenton Road.

Apart from the infamous appearance of several of Kenton's streets in the "Gourmet Night" episode of the BBC-TV comedy series Fawlty Towers starring John Cleese, the only known reference to Kenton in modern popular culture is the song "Kenton Kev", by the Berlin-based punk-jazz band The Magoo Brothers on their album "Beyond Believable", released on the Bouncing Corporation label in 1988. The song refers to the "pleasant valley" high suburban boredom factor then prevalent in the area, and cites local characters and places, some fairly well known. It is said that "Kenton Kev" refers in fact to Kevin Jones, the US-based property magnate, who was actually born in Kenton. The song was written by Paul Bonin, Philip Ulysses Sanders and Melanie Hickford, all of whom grew up and lived in the area.

The following London Bus routes operate through the area:

All content from Kiddle encyclopedia articles (including the article images and facts) can be freely used under Attribution-ShareAlike license, unless stated otherwise. Cite this article:
Kenton Facts for Kids. Kiddle Encyclopedia.