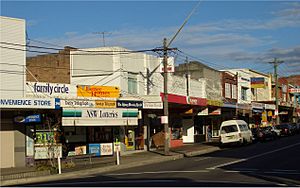 Kingsgrove is a suburb in southern Sydney, in the state of New South Wales, Australia. Kingsgrove is 13 kilometres (8.1 mi) south of the Sydney central business district and lies across the local government areas of the Canterbury-Bankstown Council, Bayside Council and the Georges River Council.

Governor Philip King granted 500 acres (2 km²) in 1804 to Hannah Laycock (1758-1831), the wife of Quartermaster Thomas Laycock (1756-1809). She named the farm King's Grove in Governor King’s honour. This was later simplified to Kingsgrove. The area would be now bounded by Kingsgrove Road, Bexley Road and William Street. Governor King made Thomas Laycock an officer of merit and recommended him to fill the vacancy an ensign in the New South Wales Corps. Two of their sons, William and Samuel were also given land grants of 100 acres (0.4 km2) each in the same area in 1804 and Hannah received another 120 acres (0.5 km2) in 1812. The entire 820 acres (3.3 km2) of Kingsgrove farm when sold to Simeon Lord in 1829, extended from Campsie and Clemton Park to Stoney Creek Road.

The first inn built in the area was the Man of Kent on Kingsgrove Road, near Morris Avenue and was licensed on 1 July 1850. The licensee Evan Evans, was formerly a sea captain. His daughter Maria married Thomas Smithson, who manufactured snuff and tobacco from premises in Stoney Creek Road. Smithson also had a vineyard on the site of today’s Bexley Golf Course. Kingsgrove railway station opened in 1931 and development in the area followed.

Kingsgrove Road runs from Stoney Creek Road in the south to Canterbury Road in the north. Kingsgrove Road also has entrance and exit ramps for the M5 Motorway, with access towards Sydney Airport and Sydney CBD. Moorefields Road and William Street are other main roads in the suburb.

All content from Kiddle encyclopedia articles (including the article images and facts) can be freely used under Attribution-ShareAlike license, unless stated otherwise. Cite this article:
Kingsgrove, New South Wales Facts for Kids. Kiddle Encyclopedia.