Knebworth is a village and civil parish in the north of Hertfordshire, England, immediately south of Stevenage. The original village, now known as Old Knebworth, developed around Knebworth House. Development of the newer Knebworth village started in the late 19th century.

Knebworth Woods is a Site of Special Scientific Interest.

On 16 June 1990 the village was twinned with the commune of Châtelaillon-Plage in France. 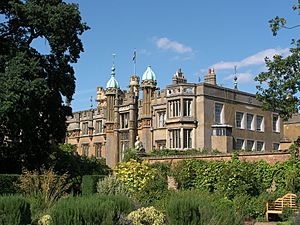 There is evidence of people living in the area as far back as Neolithic times and it is mentioned in the Domesday Book of 1086 where it is referred to as Chenepeworde (the farm belonging to the Dane, Cnebba) with a population of 150.

Knebworth has, since 1974, been famously associated with numerous major open air rock and pop concerts at Knebworth House, including Queen's final live performance which took place on 9 August 1986 and drew an attendance estimated at 300,000.

Lynyrd Skynyrd and Rolling Stones have played there.

Oasis played to a quarter of a million people for 2 nights in 1996 and more recently Robbie Williams, who for three nights in August 2003 performed to the largest crowds ever assembled for a single performer.

All content from Kiddle encyclopedia articles (including the article images and facts) can be freely used under Attribution-ShareAlike license, unless stated otherwise. Cite this article:
Knebworth Facts for Kids. Kiddle Encyclopedia.