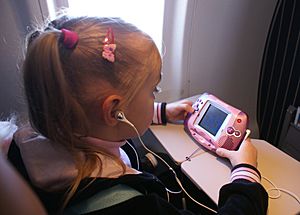 A girl with a Leapster.

The Leapster Learning Game System was an educational handheld game console aimed at 4 to 10 year olds (preschool to fourth grade), made by LeapFrog Enterprises. Its games teach the alphabet, phonics, basic math (addition, subtraction, multiplication, division), and art and animal facts to players. Along with a directional pad, the system features a touchscreen with a stylus pen that enables young users to interact directly with the screen. On February 5, 2008, LeapFrog announced the Leapster2 handheld device as a successor to the Leapster. The Leapster2 is essentially the previous system with an added USB Port and SD Card slot. These additions give the ability to play a downloaded full game or short game including the ability to log data on gameplay, such as what has been learned by the user or art created by the user. Downloadable games are not for sale.

In June 2010, the Leapster Explorer was released and LeapFrog announced a new commercial by Janimation.

The games released since the Leapster2's release log user activity and will send this data to LeapFrog's "Learning Path" system, which tracks educational milestones completed. Completion of certain learning activity can allow online games to be accessed, and in the case of art created on the device, the art can be further embellished online and printed with a printer accessible by the user's computer. Both the Leapster and Leapster L-MAX were retired in 2014 and the Leapster2 was retired in 2019.

There are approximately 40 games available, and over 50 have been created. This is the largest library for any handheld designed exclusively for educational use.

All games for the Leapster feature a "Hint" function along with a dedicated "Hint" button that will bring up audio or animated information on instructions given in the game.

LeapFrog has not opened the Leapster platform to significant amounts of third-party or homebrew development; software is typically developed in-house or as work-for-hire.

Dave Bauer stated that there is a "depressingly small library of software available for the Leapster ... but some more varied software would make it much more interesting for (my son) ... no platform that has ever been successful without third-party software. ... Besides that, a strong hobbyist platform would be amazing."

Ian Bogost stated "the potential for improved educational game design is simply not going to come from inside the LeapFrog corporation."

All of the software content for the original Leapster was created with Macromedia Flash MX 2004; the device runs a version of Adobe Flash Player ported to the Leapster, that is licensed to LeapFrog. Tom Prichard, Sr. Vice President of Marketing for Leapfrog, stated that he believed using Flash allowed them to "bring the Leapster system to life more rapidly than we could have with any other development method."

All content from Kiddle encyclopedia articles (including the article images and facts) can be freely used under Attribution-ShareAlike license, unless stated otherwise. Cite this article:
Leapster Facts for Kids. Kiddle Encyclopedia.