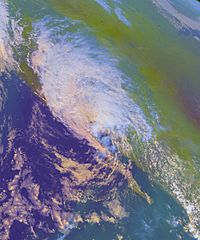 The remnants of a tropical cyclone affecting southwestern United States.

Why hurricanes do not normally hit California

Tropical cyclones usually need sea surface temperatures above 26.5 °C (80 °F) with a depth of 50 meters (160 feet) to survive. But the waters off the California coast are too cold for tropical cyclones, even during the summer. Normally, the waters' temperatures do not get above 17 °C (70 °F), although El Nino effects may sometimes warm the waters a little bit. 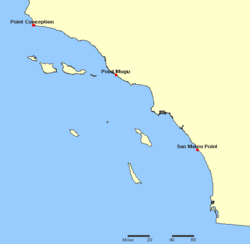 Because of a possible threat of California hurricanes in the future and from the damaging effects of a 1858 tropical storm, the National Weather Service created tropical cyclone warning stations across the southern California coast. But because of the fact that Pacific hurricanes rarely affected California, the idea of a warning station was later brought down.

The most serious damage from a California hurricane would be from heavy rainfall rather than hurricane force-winds or a storm surge, although distant hurricanes may still create heavy surf, maybe hurting or killing people.

All content from Kiddle encyclopedia articles (including the article images and facts) can be freely used under Attribution-ShareAlike license, unless stated otherwise. Cite this article:
List of hurricanes in California Facts for Kids. Kiddle Encyclopedia.