List of tallest buildings in Cleveland facts for kids 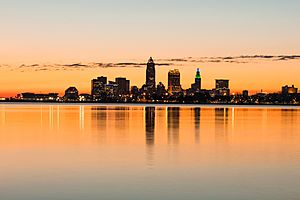 Skyline of Cleveland at sunrise.

The history of skyscrapers in Cleveland began in 1889 with the construction of the Society for Savings Building, often regarded as the first skyscraper in the city. Cleveland went through an early building boom in the late 1920s and early 1930s, during which several high-rise buildings, including the Terminal Tower, were constructed. The city experienced a second, much larger building boom that lasted from the early 1970s to early 1990s, during which time it saw the construction of over 15 skyscrapers, including the Key Tower and 200 Public Square. Overall, the city is the site of three of the four Ohio skyscrapers that rise at least 656 feet (200 m) in height; Cincinnati contains the other. As of 2020[update], the skyline of Cleveland is 27th in the United States and 96th in the world with 18 buildings rising at least 330 feet (100 m) in height.

Unlike many other major American cities, Cleveland was the site of relatively few skyscraper construction projects in the 2000s decade. The most recently completed skyscrapers in the city are the Carl B. Stokes Federal Court House Building, which was constructed in 2002 and rises 430 feet (131 m), the Ernst & Young Tower in 2013 which tops out at 330 feet (100 m), and the recently erected 374-foot-tall (114 m) Hilton Cleveland Downtown Hotel which opened in 2016. Overall, as of August 2016[update], there were 17 high-rise buildings under construction or proposed for construction in Cleveland. The most recent proposals have been for the 54-story NuCLEus building project in the Gateway Sports and Entertainment Complex district of downtown and the 34-story, 396-foot-tall (121 m) The LumenTower. The tallest building under construction is the recently commenced 355-foot-tall (108 m) Beacon apartment building downtown on Euclid Avenue.

Skyline of Cleveland from Lake Erie, with the Key Tower, 200 Public Square and the Terminal Tower at the center

This list ranks Cleveland skyscrapers and high-rises that stand at least 200 feet (61 m) tall, based on standard height measurement. This includes spires and architectural details but does not include antenna masts. An equal sign (=) following a rank indicates the same height between two or more buildings. The "Year" column indicates the year in which a building was completed.

Tallest under construction or proposed

This lists skyscrapers & high-rises that are under construction or proposed for construction in Cleveland and planned to be at least 115 feet (35 m) tall, but are not yet completed structures. A floor count of 9 stories is used as the cutoff in place of a height of 100 feet (30 m) for buildings whose heights have not yet been released by their developers. 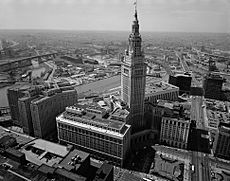 The Terminal Tower stood as tallest building in Cleveland for 61 years, from 1930 until 1991.

This lists buildings that once held the title of tallest building in Cleveland.

All content from Kiddle encyclopedia articles (including the article images and facts) can be freely used under Attribution-ShareAlike license, unless stated otherwise. Cite this article:
List of tallest buildings in Cleveland Facts for Kids. Kiddle Encyclopedia.