Live at the Marquee (festival) facts for kids

Live at the Marquee is a season of music concerts and other live performance events organised by Aiken Promotions in a large marquee in Cork, Ireland, every summer since 2005. For about a month in June and July, a concert is held most evenings; tickets for each night are sold separately, with varying lineups and pricing. Acts have represented many genres of popular music, including rock, folk, electronic, hip hop, rhythm and blues, and country; as well as stand-up comedy acts.

The first season was part of Cork's 2005 year as European Capital of Culture. It proved successful enough to be repeated annually. The venue for the first two years was the Cork Showgrounds, then owned by the Munster Agricultural Society. When the Showgrounds were acquired by the Munster GAA for its redevelopment of the adjoining Páirc Uí Chaoimh stadium, Live at the Marquee moved to an adjacent site previously used by Ford as a vehicle distribution centre. In 2018 National Asset Management Agency (NAMA), which had acquired the site after the 2008 economic crash, announced that it would be selling it. Aiken Promotions said it would seek an alternative site for further seasons of Live at the Marquee. The 2020 event was cancelled as part of the response to the COVID-19 pandemic in Ireland.

The 2005 festival was a two-week affair combining music and comedy and took place in a specially designed marquee designed by Kellie Clarke marquees (with a capacity of 4,000) in the Cork Showgrounds between 30 June and 17 July. Beach Boy Brian Wilson launched the Cork 2005 Marquee with his first ever appearance in the city of Cork. 2005 performances included: 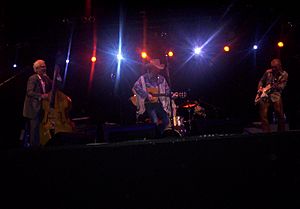 Live at the Marquee 2006 took place in the Cork Showgrounds between June and July. Headlining acts included Bob Dylan, Roger Waters, The Frames and Des Bishop. The 2006 festival featured:

It was decided that in 2007 the event would relocate to The Docklands on Centre Park Road in Cork. Bell X1 frontman Paul Noonan later said of their 2007 performance, "Without doubt, the Marquee gig in 2007 was one of the best gigs of our entire Flock tour. We had played venues like The Lobby, The Savoy and the Opera House, but being asked to play the Marquee was a crowning moment for us". The 2007 festival lineup included: 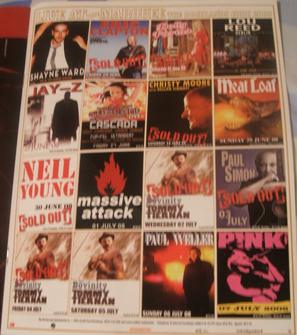 Selection of posters for the 2008 festival

The 2008 festival took place from 18 June until 7 July. Shayne Ward opened the festival and Pink returned to close it. Christy Moore returned for a fourth year whilst comedian Tommy Tiernan was originally going to perform on 3 July, but agreed to put his gig back a day to accommodate Paul Simon who was only available to perform on the 3rd. The 2008 festival lineup included:

Hot Press put together a "special guide" for the festival. The 2010 festival included:

Aiken Promotions announced the first round of acts for the 2011 festival on 26 November 2010. On 31 January 2011, The Frames were announced, followed by Grinderman being announced on 2 February, with Erasure added to the line-up on 14 February. Fleet Foxes were announced as the 10th act for the festival, and Bob Dylan, Tom Jones, Katherine Lynch, Westlife, Paul Simon and a second Imelda May show where added on 7 March. Lil Wayne was added to the line-up on 25 March but this was later cancelled as issues with work permits in the UK caused Lil Wayne's European tour to be cancelled. Katherine Lynch's show was moved to the Cork Opera House. The line-up was:

Aiken Promotions officially announced the first act for the 2012 festival on 7 November 2011, with Christy Moore performing alongside Declan Sinnott on 23 June 2012. 2012 marked the eight consecutive year Christy Moore performed at the festival. Jedward were announced on 18 November. Justice was announced as the third act confirmed for Live at the Marquee on 25 November. Dara O'Briain also made a return to the Marquee in 2012 with 2 dates. Tom Petty & The Heartbreakers were announced on 14 December, as well as shows for The Coronas and Olly Murs. The Ireland team's matches in UEFA Euro 2012 were shown in the marquee. The full line-up included:

The first acts of Live at the Marquee 2013 were announced by Aiken Promotions on 10 December 2012 with ZZ Top, Elton John, Elvis Costello and Christy Moore announced for the festival. The Coronas were announced as the 5th act to perform at LATM 2013. The projected line-up included:

The 2016 festival (15 June to 13 July) was scheduled to include performances from Slayer, Anthrax, Tom Jones, Imelda May, Chic featuring Nile Rodgers, Little Mix, Olly Murs, The Coronas, Nathan Carter and The Pixies.

All content from Kiddle encyclopedia articles (including the article images and facts) can be freely used under Attribution-ShareAlike license, unless stated otherwise. Cite this article:
Live at the Marquee (festival) Facts for Kids. Kiddle Encyclopedia.