Looe ( Cornish: Logh, lit. deep water inlet) is a coastal town and civil parish in south-east Cornwall, England, with a population of 5,280 at the 2011 census.

Looe is 20 miles (32 km) west of Plymouth and seven miles (11 km) south of Liskeard, divided in two by the River Looe, East Looe (Cornish: Logh) and West Looe (Cornish: Porthbyhan, lit. "little cove") being connected by a bridge. Looe developed as two separate towns each with MPs and its own mayor.

The town centres around a small harbour and along the steep-sided valley of the River Looe which flows between East and West Looe to the sea beside a sandy beach. Offshore to the west, opposite the stonier Hannafore Beach, lies Looe Island.

Archeological evidence, such as the so-called Giant's Hedge and the stone circle at Bin Down (from the Cornish "Bin Dun", meaning "hill fort") on a hill above East Looe, indicates that the area around Looe was inhabited as early as 1000 BC.

At the time of the Domesday Book in 1086 the manor of Pendrym, which included much of the site of modern-day East Looe, was still held by William the Conqueror, as part of his own demesne, which he later devolved to the Bodgrugan (Bodrigan) family. Land across the river belonged to the manors of Portalla (or Portallant) and Portbyhan (variously spelt Portbyan, Porthbyghan, Porthpyghan, among others).

Shutta, on the steep hillside over East Looe, is recorded as being inhabited by the 12th century. Between 1154 and 1189 Henry II granted a charter in favour of Sir Henry Bodrugan as Mayor of East Looe. West Looe was given free borough status sometime after this (the first known historical mention of the town dates from 1327) and in the 1230s East Looe secured the right to hold a weekly market and a Michaelmas fair. East Looe's layout looks like a "planted borough", a concept similar to modern new towns, since most of its streets form a grid-like pattern.

Low-lying parts of Looe continue to suffer frequent flooding when the tides are very high. For practical reasons, most fishermen's houses in ancient Looe, like elsewhere along the south coast, were constructed with their living quarters upstairs and a storage area at ground level below: for boats, tools and fishing tackle, etc; these are termed "fishermen's cellars".

Some time before 1144, the Order of Saint Benedict occupied Looe Island, building a chapel there, and the monks established a rudimentary lighthouse service using beacons. Another chapel was founded on an opposite hillside just outside West Looe; both are now marked only by ruins.

The parish church of East Looe was at St Martin by Looe but there was a chapel of ease in the town. The Church of St. Mary in East Looe was dedicated in 1259 by Walter Bronscombe, Bishop of Exeter. Despite rebuilding commencing in 1805, it has since fallen into disrepair, although the original Tower still remains. On the centre of the bridge in medieval times stood the Chapel of St Anne (dedicated in 1436): this dedication was attributed to the town chapel by Dr George Oliver and has been adopted ever since, displacing that of St Mary.

West Looe comprised part of the parish of Talland since the early Middle Ages, but a chapel of ease, St. Nicholas' Church, was extant before 1330 when it is recorded as being further endowed and enlarged. After spells as a common hall and a schoolhouse, this building has reverted to its original ecclesiastical use, having been substantially restored in 1852, 1862 and 1915.

Sketchmap of the East and West Looe Rivers

An early wooden bridge over the Looe River was in place by 1411, which burned down and was replaced by the first stone bridge, completed in 1436 and featured a chapel dedicated to St Anne in the middle (the current bridge, a seven-arched Victorian bridge, was opened in 1853). By this time Looe had become a major port, one of Cornwall's largest, exporting local tin, arsenic and granite, as well as hosting thriving fishing and boatbuilding industries. The town was able to provide some 20 ships for the Siege of Calais in 1347.

With effective civic leadership, Looe thrived in the Middle Ages and Tudor era, being both a busy port and situated with close access to the main road from London to Penzance. By this time the textile industry had come to play an important part in the town's economy, in addition to the traditional boatbuilding and fishing (particularly pilchards and crabs). Trade and transport to and from thriving Newfoundland also contributed to the town's success. The Old Guildhall in East Looe is believed to have dated from around 1500.

The constituencies of East Looe and West Looe were incorporated as parliamentary boroughs in 1571 and 1553 respectively, surviving as rotten boroughs with each returning two MPs to the unreformed House of Commons until the Great Reform Act of 1832. For example, Admiral Sir Charles Wager, a son and grandson of Kentish mariners, held the seat as MP for West Looe early in (1713–1715) and at the end (1741–1743) of his political career. The seal of East Looe was blazoned An antique one-mast vessel in it a man and boy against the side of the hulk three escutcheons each charges with three bends, with the legend "Si, comunetatis de Loo". The seal of West Looe was An armed man holding a bow in his right hand and an arrow in his left, with the legend "Por-tu-an vel Wys Westlo".

By the start of the 1800s, Looe's fortunes were in decline. The Napoleonic Wars had taken its toll on the country; in 1803, the town formed a volunteer company to man guns in defence against attack from the French. The blockade of 1808, which prevented the Looe fleet from reaching their pilchard-fishing areas, also put considerable financial strain on the community. In 1805, the old St. Mary's Chapel (apart from the tower) had to be demolished due to dilapidation, and in 1817, the town was badly damaged by heavy storms and flooding.

With the building of the Liskeard and Looe Union Canal linking Looe to Liskeard in 1828, and the development of booming copper mines in the Caradon area from 1837, Looe's fortunes began to revive. The Herodsfoot mine produced 13,470 tons of lead between 1848 and 1884 and more than 17 tons of silver between 1853 and 1884. The canal was used first to transport lime from Wales for use in Cornish farming, and later to carry copper and granite between the railhead at Liskeard (from where rail links reached to the Cheesewring on Bodmin Moor) and the port of Looe. In 1856 the large quay of East Looe was built to handle the demands of the shipping trade, and in 1860, with the canal unable to keep up with demand, a railway was built linking Looe to Moorswater near Liskeard, along the towpath of the canal, which was used less and less until, by 1910, traffic ceased entirely. The railway was later linked to Liskeard proper, and as the mining boom came to an end, it adapted to carry passengers in 1879.

In 1866, a lifeboat station had been established on East Looe Beach, and in 1878 a new town hall was built: Looe's present-day Guildhall. Around this time recommendations were made that the two towns be merged under one governing body, and despite much protest Looe Urban District Council was formed in 1898 with jurisdiction over the communities on both sides of the River Looe.

With the Victorian fashion for seaside holidays, Looe evolved as a tourist town, with nearby Talland Bay being dubbed "the playground of Plymouth". This trend continued throughout the 20th century; more and more hotels and tourist facilities were built in the town, and Looe grew and prospered, with peaks in fishing and boatbuilding following the First and Second World Wars. 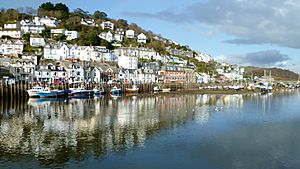 West Looe viewed across the river from East Looe

Looe remains a fishing town, and retained several fish dealers operating from the quayside of East Looe until the advent of EU regulations. With its fleet of small fishing boats returning their catches to port daily, Looe has a reputation for procuring excellent fresh fish. The town is also a centre for shark fishing, and is the home of the Shark Angling Club of Great Britain. 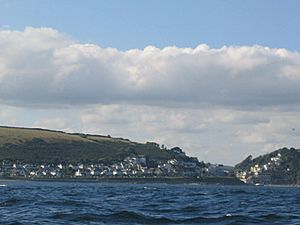 View towards Looe, taken from near Looe Island

Nonetheless, Looe's main business today is tourism, with much of the town given over to hotels, guest houses and holiday homes, along with a large number of pubs, restaurants and beach equipment, ice cream and Cornish pasty vendors. Inland from Looe lie many camping and caravan sites, as well as the famous Woolly Monkey Sanctuary. Other local attractions include the beaches, sailing, fishing and diving, and spectacular coastal walks (especially via Talland to Polperro). South East Cornwall boasts several stately homes, including Antony House, Cotehele, Mount Edgcumbe and Lanhydrock House, as well as the Eden Project near St Austell which tourists can access by road.

Outside the busy summer months, the town remains a centre for shopping and entertainment for local villagers. Annually in late September, the town is the destination of choice for thousands of music lovers and top name performers for the Looe Music Festival, which takes place in temporary venues around the town, harbour and on East Looe beach.

There is a tradition of the townsfolk wearing fancy dress on New Year's Eve, when the streets are thronged with revellers in inventive outfits. Looe has been on the list of the top 10 places in the UK to celebrate New Year, and ranked third on the list for 2007-08. Looe is regenerating itself, like many other ports, to serve as a small cargo port. On the high ground north of East and West Looe there are many modern houses and a recreational area called 'the Downs'. 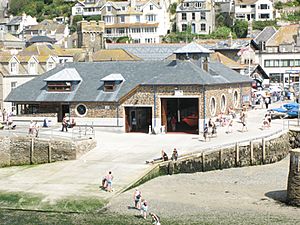 East Looe centres on its broad sandy beach, with the distinctive Banjo Pier designed by Joseph Thomas, a new lifeboat station and St Mary's Church. Stretching back from the church is a grid of narrow streets forming the main business area of the town, packed with many small shops, restaurants and pubs and the Old Guildhall, now a museum. Along the estuary lies the quay with its fish merchants. Towards Looe Bridge lies the Victorian Guildhall, and just north of the bridge the railway station. This is the terminus of the Looe Valley branch line to Liskeard, where it connects to the Great Western Main Line and services to London Paddington.

On the hilltop above East Looe lies Shutta, and beyond that the Sunrising housing estate and Looe Community Academy. Along the cliffs to the east is Plaidy Beach, and further on the bay and village of Millendreath. 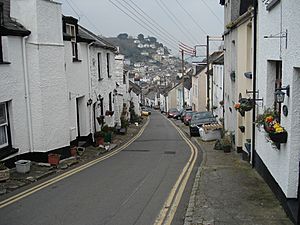 View down West Looe Hill, looking towards the harbour

West Looe spreads west from the bridge on the Polperro Road towards Sclerder, and along the river south of the bridge, with hotels, restaurants and boarding houses along the waterfront and houses climbing the perilous cliff above, towards a cluster of shops and businesses and the Church of St. Nicholas.

Further south along the coast road is Hannafore Point, marking the edge of Looe Harbour, with to the west the wide, stony Hannafore Beach, facing across a narrow channel to Looe Island. Beyond lies the coastal path leading to Portnadler Bay, Talland and Porthallow, and then onward to Polperro. Two towers mark one end of a nautical measured mile, the other end is marked by two towers near Talland Bay.

On New Year's Eve, Looe provides a surprisingly exciting and large celebration. The small fishing town, usually quiet in winter, due to the largely seasonal economy, is host to an influx of visitors. People flock to the streets in their hundreds, wearing fancy dress, a tradition upheld by all ages. The crowds begin the evening in the town and slowly move towards the seafront for a fireworks display to see in the New Year.

Looe is twinned with Quiberon (Breton: Kiberen) in Brittany, France.

All content from Kiddle encyclopedia articles (including the article images and facts) can be freely used under Attribution-ShareAlike license, unless stated otherwise. Cite this article:
Looe Facts for Kids. Kiddle Encyclopedia.