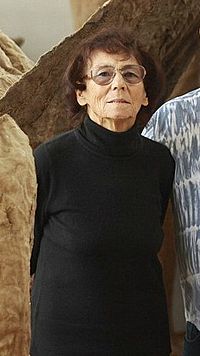 Marta Magdalena Abakanowicz-Kosmowska (June 20, 1930 – April 20, 2017) was a Polish sculptor and fiber artist. She was known for her use of textiles as a sculptural medium. She was a professor at the Academy of Fine Arts in Poznań, Poland from 1965 to 1990 and a visiting professor at University of California, Los Angeles in 1984. She was born in Falenty, Poland.

All content from Kiddle encyclopedia articles (including the article images and facts) can be freely used under Attribution-ShareAlike license, unless stated otherwise. Cite this article:
Magdalena Abakanowicz Facts for Kids. Kiddle Encyclopedia.