Kids Encyclopedia Facts
This page is about the town of Maghera, County Londonderry, Northern Ireland. For other uses, see Maghera (disambiguation). 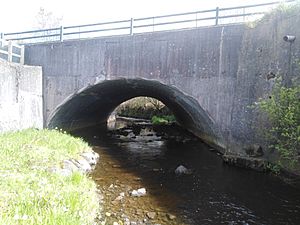 Galwilly Bridge Over The Milltown Burn Located Outside Maghera In Glen Housing Estate.

Maghera (pronounced mah-HƏ-rah, from Irish: Machaire Rátha, meaning "plain of the ringfort") is a small town at the foot of the Glenshane Pass in County Londonderry, Northern Ireland. Its population was 4,220 in the 2011 Census, increasing from 3,711 in the 2001 Census. It is situated within Mid-Ulster District, as well as the civil parish of Maghera, which it was named after, and the former barony of Loughinsholin.

The Annals of Ulster say that the seat of the Cenél nEoghain was at Ráth Luraig in Maghera.

On 12 July 1830, Orange Order marches led to clashes between Orangemen and Ribbonmen in Maghera and Castledawson. Several Catholic homes were then burnt by Protestants following these clashes.

Main page: The Troubles in Maghera

Maghera suffered significant violence during the Troubles. In total, 14 people were killed, half of them members of the security forces and a further two as a result of family membership of the Ulster Defence Regiment. The Provisional Irish Republican Army were responsible for ten of the deaths. 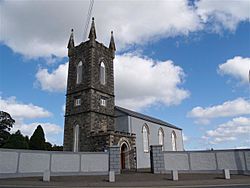 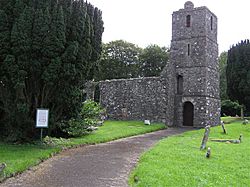 Maghera is classified as an intermediate settlement by the NI Statistics and Research Agency (NISRA) (i.e. with population between 2,250 and 4,500 people). On Census day (29 April 2001) there were 3,711 people living in Maghera. Of these:

Notable buildings in Maghera include St Lurach's Church, which was founded in the year 500AD, originally as a monastery. The town of Maghera grew up around this church. The importance of the monastery was such that Maghera was a bishop's seat in the 12th and 13th centuries. However, the Church was raided by the Vikings and fell into disrepair and is now maintained by the Environmental Heritage Service. Within the ruins, as an inset to the west wall is a sculpture of the crucifixion, which is thought to date from the 10th century – making it one of earliest surviving representations of the crucifixion in Ireland. St Lurach is also the saint of the town. 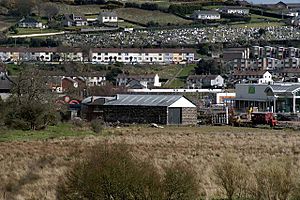 Maghera Goods Shed, now at Downpatrick railway station on the Downpatrick and County Down Railway.

All content from Kiddle encyclopedia articles (including the article images and facts) can be freely used under Attribution-ShareAlike license, unless stated otherwise. Cite this article:
Maghera Facts for Kids. Kiddle Encyclopedia.