Ayatollah Shahroudi was best known for ordering a moratorium on stoning as a form of the death penalty. However, later it was shown that executions by stoning are still being carried out, in spite of his claims that they have stopped. Stoning is still happening inside prisons, where the public cannot see it.

From August 2017 to December 2018, Shahroudi was Chairman of Expediency Discernment Council. 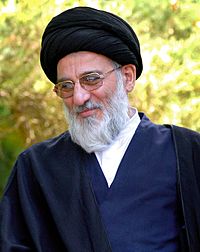 All content from Kiddle encyclopedia articles (including the article images and facts) can be freely used under Attribution-ShareAlike license, unless stated otherwise. Cite this article:
Mahmoud Hashemi Shahroudi Facts for Kids. Kiddle Encyclopedia.