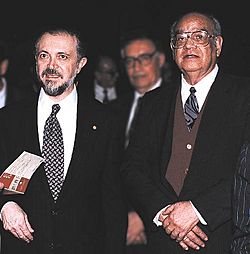 Molina was one of 20 Nobel Laureates who signed the "Stockholm memorandum" at the 3rd Nobel Laureate Symposium on Global Sustainability in Stockholm, Sweden on 18 May 2011. Molina led a committee of the American Association for the Advancement of Science which released a stark report on global warming March 2014.

All content from Kiddle encyclopedia articles (including the article images and facts) can be freely used under Attribution-ShareAlike license, unless stated otherwise. Cite this article:
Mario J. Molina Facts for Kids. Kiddle Encyclopedia.