Meißen (Sorbian: Mišno) is a town of about 30,000 near Dresden on both banks of the Elbe in the Free State of Saxony, in eastern Germany. Meißen is the home of Meißen porcelain. Meißen is the capital city of Meißen Rural District

During World War II, a subcamp of Flossenburg concentration camp was in Meißen. 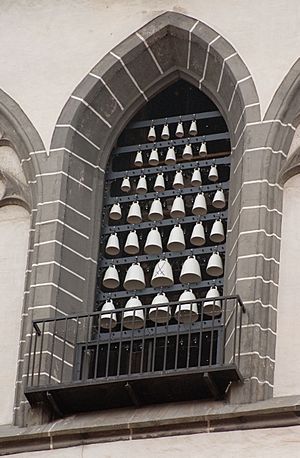 Meißen is famous for the manufacture of porcelain. This is because there are big local deposits of china clay (kaolin) and potter's clay (potter's earth). Meißen porcelain was the first high quality porcelain to be produced outside of China.

The first European porcelain was made in Meißen in 1710, when the Royal Porcelain Factory was opened in the Albrechtsburg. In 1861, it was moved to the Triebisch valley of Meißen, where the Meißen porcelain factory can still be found today.

All content from Kiddle encyclopedia articles (including the article images and facts) can be freely used under Attribution-ShareAlike license, unless stated otherwise. Cite this article:
Meißen Facts for Kids. Kiddle Encyclopedia.