MomoCon is a fan convention held in March or May in Atlanta, Georgia.

From 2005 to 2011, there was no entry fee to MomoCon; the convention sold T-shirts and highlight DVDs to fund the next year. Due to rising costs, 2012 was the first year that an admission fee was required.

The word "momo" in Japanese means "peaches", and its host state, Georgia, being the "Peach State" led to the naming of MomoCon.

Every year, MomoCon has a theme that goes into the design of the convention that year. The first year, it was "Southern Hospitality" and T-shirts were black and featured the MomoCon mascot, as created and drawn by H. M. Ogburn. In 2005, MomoCon was run by an estimated 35 volunteers. The convention had over 30 guests and many special demo teams, as well as several special events and feature movies. An article on the anime club and the convention was featured in the February 2005 issue of Newtype USA, and professionally made commercials were seen around Georgia Tech campus before on-campus movies in the Student Center.

In 2006, T-shirts for 2006 were black and featured the same MomoCon mascot in a purple kimono in the moonlight, to coincide with the Tsukimi ("moon-viewing") theme. MomoCon 2006 had a convention motto of "Because You Shouldn't Have to Pay for Quality" and featured an opening ceremonies video that was a parody of Iron Chef, with "Chairman Panda" and the "Iron Staff". Key events for 2006 included a Tsukimi festival with kimono-clad wait staff, a Gaming Decathlon, a Pocky Stop cafe, and a rain-cancelled Sidewalk Art competition. Guests included numerous webcomic and comic artists, voice actress Amy Howard Wilson of Star Blazers fame and prop maker Robert "Vaderpainter" Bean.

In 2007, T-shirts for 2007 were hunter green and featured the MomoCon mascot; the staff theme was "The Family". The video game tournaments were reworked to feature a few large tournaments, as opposed to many smaller tournaments, and a larger costume contest was held at Georgia Tech's Kessler Campanile. The new costume contest location provided seating for a greater number of attendees, and was held earlier in the evening. Local area groups stepped forward to run workshops and seminars on their respective expertise, including a plethora of costuming panels and workshops, Japanese ceremonial demonstrations and game demos. On Sunday (March 18, 2007), the convention was closed nine hours early because several con attendees attempted to set off firecrackers inside the Georgia Tech Student Center.

Because the number 4 is considered unlucky in Japanese culture, MomoCon 2008 (the 4th event) featured a gothic horror-style theme. In addition to several events from past years, 2008's event included a Twilight Tea event, at the end of the day on Sunday, in lieu of a closing ceremony. Con-goers were asked to stop by for some fresh-brewed tea under the light of red paper lanterns at dusk and let the staff know what they would like to see at the event in the future. Due to the security problem in 2007, subsequent MomoCon events (starting with 2008) have required registration to enter. Attendees were required to present a valid photo ID to enter, and children under the age of 16 needed to be accompanied by an adult. Badges were provided, and the event remained free for congoers.

The theme for MomoCon 2009 was retro-campy science fiction. Additional Japanese cultural events were held, including community support from local groups who specialize in these events. The second floor of the Instructional Center building, previously used only for tournaments, was used for additional panel, workshop and anime viewing space. Special events included screenings of public domain science fiction movies from the 1950s and 1960s and a Mechas and Monsters late-night programming block, featuring Kaiju and mecha movies. The first band performance at MomoCon happened in 2009: The Extraordinary Contraptions, a Steampunk-themed rock band. 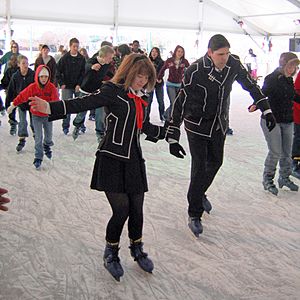 MomoCon also sponsors local events that bolster awareness of the convention and of Japanese culture. Anime O-Tekku began this tradition by bringing many movies and gatherings to Georgia Tech's campus and Atlanta, and MomoCon continues it.

All content from Kiddle encyclopedia articles (including the article images and facts) can be freely used under Attribution-ShareAlike license, unless stated otherwise. Cite this article:
MomoCon Facts for Kids. Kiddle Encyclopedia.