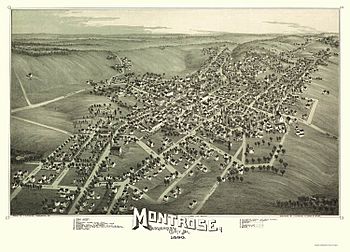 Montrose, Pennsylvania, as depicted on an 1890 panoramic map.

Montrose is a borough in Susquehanna County, Pennsylvania, United States, 37 miles (60 km) north by west of Scranton. The land is elevated about 1,400 feet (427 m) above sea level. It is the county seat.

Montrose was laid out in 1812. The first courthouse was built a year later, and Montrose was incorporated as a borough from part of Bridgewater Township on March 29, 1824. Its name is a combination of "mont", the French word for “mountain” and Rose, for Dr. L R. Rose, a prominent citizen.

The traditional older industries included creameries and the manufacturing of cut glass, boxes, sawing machinery, lumber, etc. In 1900, 1,827 people lived here, and in 1910, 1,914 people lived here. The population was 1,664 at the 2000 census. The population was 1,617 at the 2010 census. It is the county seat of Susquehanna County. The area of Montrose is notable for its many quarry sites. A type of rock that is indigenous to this area is called blue stone. The town, along with Susquehanna County, is best known as the location of significant Marcellus shale drilling, putting Montrose in the center of the bourgeoning natural gas industry of the 21st century.

Montrose was incorporated as a town and seat of Susquehanna County in 1824, but families began immigrating to the area in the mid-18th century, primarily from areas along the Connecticut River Valley (western Connecticut, Massachusetts, and Vermont). The American Revolution dramatically changed the political and built environments of New England. After the war, there was pent-up land hunger and many residents wanted some of the affordable land in Pennsylvania. When settlers arrived in what is now Susquehanna County they found rolling hills, clear lakes, and mountain streams with an abundance of natural resources such as timber and bluestone. In a very short period of time, the first families built Montrose in the style of their home New England towns: large colonial style houses surrounding churches, and both centered on a main street. A town “green” adjacent to the courthouse was the commons, or place for community events.

Several townsfolk and local historians claim that Montrose played a significant role in the Northern Trail of the Underground Railroad, and that several escaped slaves families were housed temporarily in town. Folklore has it that many of these families remained in Montrose or Susquehanna County after the War. Numerous local residents sought historical landmark status for their homes in the twentieth and twenty-first centuries based on local lore about the Railroad, but many were denied by the Pennsylvania Historical Commission due to lack of evidence that the rumored events took place. Several academic historians believe that, while the possibility of a family or two stopping in Montrose along the Northern Trail is plausible, the increase in African-American population in the county after the Civil War was more likely the result of people being attracted to jobs in the then-bourgeoning coal industry just south of the county. The Susquehanna County Historical Society and the Center for Anti-Slavery Studies (housed in one of the suspected former Railroad homes) remain dedicated to identifying and analyzing primary documents of the time. Historians have found little documentation to support the Underground Railroad claims.

Between the 1950s and 1990s, due to the declines in the coal industry and agriculture, residents emigrated from this area to other places for work. It was not until oil started to be heavily drilled for in the late 2000s that the economy began to pick up, in a dramatic way not seen since the late 19th century. Due to increased revenues in town, the Montrose hospital (the only major hospital in Susquehanna County) was moved from an old and small facility downtown to a large, advanced facility just outside town.

The town's Sylvanus Mulford House, Silver Lake Bank, and Susquehanna County Courthouse Complex are listed on the National Register of Historic Places. The Montrose Historic District was added in 2011.

According to the United States Census Bureau, the borough has a total area of 1.3 square miles (3.4 km2), all land.

There were 754 households out of which 23.1% had children under the age of 18 living with them, 39.3% were married couples living together, 10.2% had a female householder with no husband present, and 47.1% were non-families. 42.3% of all households were made up of individuals and 21.2% had someone living alone who was 65 years of age or older. The average household size was 2.14 and the average family size was 2.97.

Montrose is linked to the major highway in the area, Interstate 81, by only one winding road, Pennsylvania Route 706. Montrose is linked also by road to Friendsville, Little Meadows, and South Montrose. Although Husky Haven Airport is located minutes away, it is strictly recreational. All main flights must come in through Scranton or Binghamton airports.

All content from Kiddle encyclopedia articles (including the article images and facts) can be freely used under Attribution-ShareAlike license, unless stated otherwise. Cite this article:
Montrose, Pennsylvania Facts for Kids. Kiddle Encyclopedia.