Mooloolaba is a suburb and tourist resort township on the Sunshine Coast of Queensland, Australia. It is located 97 kilometres (60 mi) north of the state capital, Brisbane, and is part of the Maroochydore urban centre. At the 2011 Australian Census the suburb recorded a population of 7,333.

Mooloolaba derives from the Aboriginal word mulu, meaning snapper fish, or mulla meaning Red-bellied Black Snake. Originally known as Mooloolah Heads, the name was changed to Mooloolaba by Thomas O'Connor in 1919 when he subdivided land for sale there.

Lieutenant Heath surveyed and chartered the Mooloolah River mouth and harbour in 1861. The following year, Tome Petrie explored the region for timber resources. By 1864, the first land was purchased at the mouth of the Mooloolah River by William Pettigrew. Pettigrew dominated the timber trade in the Maroochy District for the next thirty years. He founded a timber depot and wharf to ship timber from Cotton Tree and Buderim to his Brisbane sawmill. In partnership with James Low, he also opened the first store in the district to serve the needs of the new settlers.

Mooloolah Heads was the gateway to the Maroochy District between 1870 and 1884. Due to the protection Point Cartwright offered, the port was preferred over the Maroochy River. Pettigrew's steamers 'Tarshaw,' 'Tadorna Radjah' and 'Gneering' operated along both rivers. The steamers carried produce, passengers and timber between Mooloolaba and Brisbane. In 1891, with the opening of the North Coast Railway to Yandina, river transport deteriorated. Pettigrew transferred his activities to Maroochydore, establishing a sawmill there in 1891, leading to the further declination of the depot at Mooloolah Heads. Over the next decade little development occurred in the coastal areas.

By the year 1919, Mooloolah Heads industry had grown to include fishing and fruit growing. Thomas O'Connor bought Pettigrew's land from Sylvester Murphy and surveyed the first allotments of what was to become Mooloolaba. On 1 January 1921, the first sale of allotments was held. These extended along the river frontage from the surf beach to Tucker Creek.

It was then that the name Mooloolaba was embraced to distinguish between this developing area and the Mooloolah township on the railway.

Throughout the 1920s the population increased. The area had always been a desirable destination for Buderim settlers. Holiday cottages and houses were dotted along the river and the narrow spit. Boat hire and fishing were also very popular. As the roads and public amenities improved, Mooloolaba continued to develop as both a premier residential and holiday location. 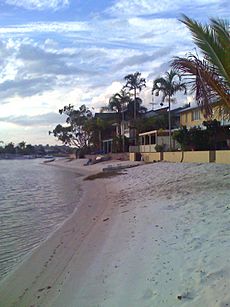 Mooloolaba is bounded on the east by the Coral Sea, on the south by the Mooloolah River, on the north by Alexandra Headland and to the west by Buderim. Mooloolaba Harbour (actually the mouth of the Mooloolah River) is the home of a large fleet of fishing vessels, as well as being the northern base for the pilot vessels that control shipping through Moreton Bay and the Port of Brisbane. Due to its sheltered location in the lee of Point Cartwright, it is an all-weather harbour favoured by recreational sailors.

The esplanade facing Mooloolaba beach is a centre for tourist activity, containing the UnderWater World marine park, as well as many souvenir and clothing shops, bookshops, galleries and restaurants. Behind the apartments facing the beach are camping grounds, backpacker hostels and canal villas. It is also a tourism destination, with cruise ships regularly anchoring outside the port.

Mooloolaba is serviced by coach from Brisbane, by train and connecting bus via Nambour, Woombye, Landsborough station, and by air from Sunshine Coast Airport.

Mooloolaba featured in the fourth season of the Amazing Race. Evangelist Peter Foxhall and Pastor Bill Furler pioneered an Assemblies of God church at the Mooloolaba Surf Lifesaving Club in the mid-1980s. The town was also the home of the Christian pop/rock band Newsboys, and is the fourth town mentioned in the original Australian version of the song "I've Been Everywhere".

All content from Kiddle encyclopedia articles (including the article images and facts) can be freely used under Attribution-ShareAlike license, unless stated otherwise. Cite this article:
Mooloolaba Facts for Kids. Kiddle Encyclopedia.