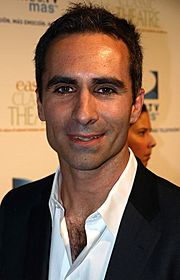 Nestor Gastón Carbonell (born December 1, 1967 in New York City, New York) is an American television and movie actor. He is known for playing Richard Alpert in Lost, and for playing Mayor Anthony Garcia in Christopher Nolan's The Dark Knight (2008) and in The Dark Knight Rises (2012). He is also known for his role in Suddenly Susan, Batmanuel in The Tick and Sheriff Romero in "Bates Motel".

Carbonell was born on December 1, 1967 in New York City, New York to a Spanish family. Carbonell was educated at Harvard University. He has been married to Shannon Kenny since 2001. They have two children together.

All content from Kiddle encyclopedia articles (including the article images and facts) can be freely used under Attribution-ShareAlike license, unless stated otherwise. Cite this article:
Nestor Carbonell Facts for Kids. Kiddle Encyclopedia.