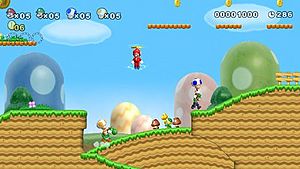 Players can play as either Mario, his brother Luigi, or two Toad characters: one blue and one yellow (with the first player always as Mario).

Controls are similar to those of New Super Mario Bros., with the added abilities of spinning in mid-air by shaking the Wii Remote; and picking up, carrying, and throwing other players. In multiplayer mode, players can play up to four players simultaneously. If a player character loses a life and has at least one life in reserve, he will re-emerge encased inside a bubble, and can resume play once another player frees him by touching the bubble or a fire/ice ball (the player can shake the Wii Remote to move his bubble closer to an active player, but cannot free himself). If a player loses a life and does not have any more lives, a Continue must be used to start over with five lives. Players can also encase themselves inside the bubble by pressing the A button while a more skilled player traverses a difficult segment. If every character in a co-op session enters bubbles at the same time (whether through death or pressing the A button), the level is lost, and they must restart.

In multiplayer mode, if one or more players do not keep up with the one in the lead, on some levels, the view will pan out a bit so that the player[s] in the rear will still be in view. If the players still do not catch up, they are then dragged by the edge of the screen, until they move forward faster or lose a life by a fall or other object. If one player enters a pipe, climbs a vine, grabs the flagpole at the end of the stage, etc. without the others, the other players will warp to the same place after a short time, or have a limited amount of time to grab the pole before the course ends. On vertically scrolling courses, being left below the screen results in losing a life. On the world map, Mario (Player 1) controls navigation.

Players return to the map screen if they all run out of lives, or if all players lose their lives at the same time, leaving no one to free them. For most levels, there is a midway flag that if touched will return the player to that point after dying and being sent back to the map screen. The stage is completed by getting at least one player to touch the goal at the end, though a bonus is awarded if all players manage to grab hold of the flag within three seconds of the first player grabbing it. In a few levels, in addition to the normal goal and flag pole, there is an alternative exit leading to a red flag pole. Reaching this goal will open up a new path on the map, leading to new stages on the overworld map and on occasion a warp cannon (which will blast the player off to a later world). The game does not feature online multiplayer. During single player mode, losing a life sends the player back to the map screen.

Along with the usual Mario series items, as well as the Mini Mushroom from New Super Mario Bros., new items have been added, including: the Propeller Mushroom, which allows players to fly; the Ice Flower, which allow players to freeze enemies with snowballs; and the Penguin Suit which, on top of the Ice Flower's ability, allows players to slide along the ground and across water as well as have better control on ice and in water. Players are also able to ride on Yoshis, who appear in certain levels and can swallow enemies and flutter in the air. All levels can be accessed via a map screen, and enemies are often roaming it. If the player bumps into one while traveling the map, a "mini-boss" fight will be initiated; if successful in the fight, players can earn three extra Super Mushrooms. There are also Toad Houses where players can earn additional lives and items that can be equipped on the map screen. At some points, a Toad will appear trapped in one of the previously completed levels, and the player can choose to rescue him from a block and carry him safely to the end of the stage to earn bonus lives (this can only be done with one player). There are three Star Coins hidden in each course which can be spent on hint movies that show certain secrets, such as the location of a secret goal or how to gain infinite 1-ups. Collecting all the Star Coins within a world unlocks one course from the secret World 9 that can only be played after the main game has been completed.

The game includes simultaneous multiplayer capability of up to four players. In addition to the main story mode, which can be played in either single-player or multiplayer modes, there are two dedicated multiplayer modes. "Free-for-All Mode" ranks players at the end of each course by score, coins, and enemy kills; while the other mode, "Coin Battle," ranks players on the amount of coins collected.

The game is the first on the Wii to feature "Super Guide," a new system devised by Mario creator Shigeru Miyamoto. During single player mode, if a player dies eight times in a row in any level, a green "!" Block appears, allowing a computer-controlled Luigi to show the player a safe path through the level. The player may interrupt the guide at anytime and take control. After Luigi completes it, the player has the option to try the level again, or skip it completely. However, Luigi will not reveal any Star Coin locations or secret exits. A variation of this is used in Super Mario Galaxy 2, where it is called "Cosmic Guide." Another variation is found in Donkey Kong Country Returns, where it is also known as "Super Guide."

The game was created in response to Nintendo's head game developer Shigeru Miyamoto's desire to recreate the Mario series's single-player gameplay experience for multiple players, as he was unable to bring these ideas in previous installments. The Wii's hardware allowed him to display enough enemies and items on the screen at once, and allowed a camera that could dynamically adapt to the players' movements, ensuring they constantly know what is the situation of their character.

The music for New Super Mario Bros. Wii was created by Shiho Fujii and Ryo Nagamatsu. There were additional compositions provided by sound director Kenta Nagata. Koji Kondo was the sound advisor and did not write any new compositions, though some of his creations were rearranged for the game. Charles Martinet returned to voice Mario and Luigi, along with Samantha Kelly as the Toads and Princess Peach, Kenny James as Bowser, and Caety Sagoian as Bowser Jr. New voice actors include Lani Minella as Larry Koopa, Morton Koopa Jr., Wendy O. Koopa, and Lemmy Koopa, Dan Falcone as Roy Koopa, and Mike Vaughn as Iggy Koopa and Ludwig von Koopa.

All content from Kiddle encyclopedia articles (including the article images and facts) can be freely used under Attribution-ShareAlike license, unless stated otherwise. Cite this article:
New Super Mario Bros. Wii Facts for Kids. Kiddle Encyclopedia.