Kids Encyclopedia Facts
This page is about the village of Nutley in East Sussex. For the township in Essex County, New Jersey, see Nutley, New Jersey.

Nutley is a village in the Wealden District of East Sussex, England. It lies about 5 mi (8.0 km) north-west of Uckfield, the main road being the A22. Nutley, Fairwarp and Maresfield together form the Maresfield civil parish.

The village is on the southern edge of Ashdown Forest which was a deer hunting reserve from the time of King Edward II. Iron has also played an important role in the history of the area. 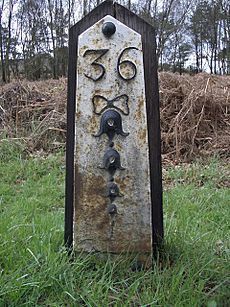 The Romans operated nearby in Duddleswell and Maresfield, working the iron ore to be found in the local Weald Clay using bloomeries. Roman coins and waste from furnaces has been found at these locations. When the Romans left Britain in the 5th century AD Saxon settlers lived on the site of Nutley. "Hnut's leagh" means "Hnut's Clearing", and is the most likely origin of the village's modern-day name.

Following the Norman Invasion of 1066, Nutley became part of the Rape of Pevensey. In 1176 a chapel was built by Richer de Aquila L'Aigle. It was built in an area known as Chapelwood, along the Chelwood Gate road, just outside Nutley's borders. 60 acres (24 ha) of land near Wych Cross on Ashdown Forest was granted to the chapel. It was attached to the church at Maresfield. The chapel went out of use after the English Reformation.

In 1372 Edward III gave the Chapel of Notlye (as it was called at the time) along with almost 1,400 acres (5.7 km2) of land to his son, John of Gaunt. They were both frequent visitors to Ashdown Forest (then known as Lancaster Great Park; it would keep that name for the next three centuries) because of the hunting.

Contraband goods, shipped across the English Channel, were smuggled along the packhorse track from Duddleswell to Nutley. In 1721 Gabriel Tomkins, the leader of the Mayfield Gang, was captured and arrested in Nutley having been chased from Burwash. Tomkins was sentenced to seven years transportation, but gained his freedom by giving valuable information to the authorities. He went on to have a mixed career as both smuggler and customs officer, being Custom House Officer at Dartford in Kent in 1735 and Bailiff to the Sheriff of Sussex, but was hanged in 1750 at Bedford for robbing the Chester stage coach.

Nutley Windmill, a rare example of an open trestle post mill, was moved to Nutley from Goudhurst, Kent around 1817, her timbers being older than this. Standing on the edge of the forest she was modernised in the 1880s and operated until 1908.

It was only in the mid-19th century that the village school and the church, dedicated to Saint James the Less, were built. The land upon which the school was built was donated by the Earl and Countess De La Warr. Both the school and church are still in use today.

Piped water was first introduced to the village in the early 20th century, but electricity and telephones did not arrive until the 1930s.

During the First World War and Second World War Canadian troops were stationed at Pippingford Park near Nutley. In the Second World War a Wellington bomber returning from a raid over Germany crashed nearby. The crew were killed. In 1944 a stick of bombs from a German plane landed in Nutley, resulting in minor damage. Twenty locals died in combat during the First World War. To commemorate their sacrifice a Memorial Hall was built, situated opposite what is now the village post office. Eighteen others died in the Second World War, and a second memorial hall was built in the 1970s. It stands opposite the school, and there is also a social club, set of committee rooms, a tennis and squash club, and the Parish Council office. The land for this second memorial hall was donated by the Nettlefold family. Today it is managed by the Nutley War Memorial Trust. 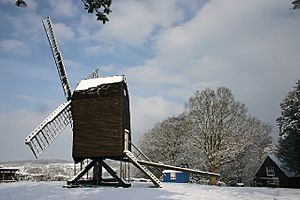 Situated next to Ashdown Forest, Nutley is surrounded by idyllic countryside. Nutley lies on the A22 London to Eastbourne main road.

Nutley's terrain near the main road is relatively flat, however the further one drifts from the main road the more undulating the land becomes. Off the A22, there are numerous side-roads and country lanes, many of which hold tradition in the village.

60% of Nutley's 16–74 age group are either employed or self-employed with full or part-time work. Few people are unemployed. 70% of this age group possess a type of qualification, while 20% have a first degree or higher qualification.

All content from Kiddle encyclopedia articles (including the article images and facts) can be freely used under Attribution-ShareAlike license, unless stated otherwise. Cite this article:
Nutley, East Sussex Facts for Kids. Kiddle Encyclopedia.