One Times Square facts for kids

The tower was originally built to serve as the headquarters of The New York Times, which moved into the tower in January 1904. The paper's owner persuaded the city to re-name the area "Times Square". Eight years later, the paper's offices moved to a larger building, 229 West 43rd Street. After the Times moved its offices, One Times Square, remained a major focal point of the area due to its annual New Year's Eve "ball drop" festivities, and the introduction of a large lighted news ticker near street-level, in 1928, by The New York Times.

Following its sale to Lehman Brothers in 1995, One Times Square was re-purposed with advertising billboards on its facade to take advantage of its prime location within the square. Due to the large amount of revenue generated by its signage, One Times Square is considered one of the most valuable advertising locations in the world.

Most of the building's interior remains vacant, aside from a Walgreens pharmacy which occupies its lower levels. In 2017, as part of One Times Square's redevelopment, plans were announced to construct a new Times Square museum, observation deck, and a new entrance to the Times Square–42nd Street subway station. Construction on the new subway entrance began in 2019.

One Times Square, on the site of the Pabst Hotel, was completed in 1904 to serve as the headquarters of The New York Times, which officially moved into the building in January 1905. The newspaper's owner, Adolph Ochs, also successfully persuaded the city to rename the surrounding area (then known as Longacre Square) after the newspaper, becoming Times Square. When opened, the building contained intricate decorative elements, including a facade of stone and terracotta. The structure contained an arcade that connected to the New York City Subway's Times Square station. The Times Building was be long and narrow, due to the convergence of Broadway and Seventh Avenue at Times Square, so an extensive system of wind bracing was used.

To help promote the new headquarters, the Times held a New Year's Eve event on December 31, 1904, welcoming the year of 1905 with a fireworks display set off from the roof of the building at midnight. The event was a success, attracting 200,000 spectators, and was continued annually until 1907. For 1908, Ochs replaced the display with what he thought would be a more spectacular event—the lowering of a lit ball down the building's flagpole at midnight, patterned off the use of time balls to indicate a certain time of day. The "ball drop" is still held on One Times Square to this day, attracting an average of one million spectators yearly. 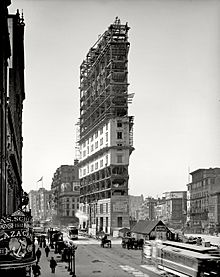 On November 6, 1928, an electromechanical Motograph News Bulletin [fr] news ticker, colloquially known as the "zipper", was introduced near the base of the building. The zipper originally consisted of 14,800 light bulbs, with the display controlled by a chain conveyor system inside the building; individual letter elements (a form of movable type) were loaded into frames to spell out news headlines. As the frames moved along the conveyor, the letters themselves triggered electrical contacts which lit the external bulbs (the zipper has since been upgraded to use modern LED technology). The first headline displayed on the zipper announced Herbert Hoover's victory in that day's presidential election. The zipper was used to display other major news headlines of the era, and its content later expanded to include sports and weather updates as well. On the evening of August 14, 1945, the zipper was famously used to announce Japan's surrender from World War II to a packed crowd in Times Square. 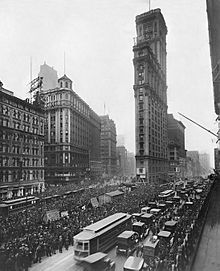 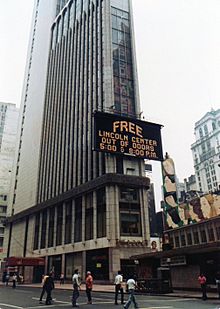 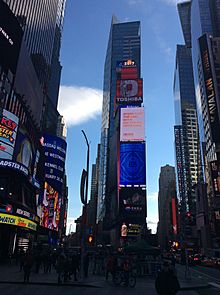 Sale and later use

The Times sold the building to advertising executive and sign designer Douglas Leigh in 1961. Leigh then sold the building to Allied Chemical in 1963. Allied Chemical greatly modified the building's facade in a $10 million renovation, replacing intricate granite and terracotta elements with marble facing. In 1974, the building was sold to investor Alex Parker for $6.25 million, and then to the Swiss-based investment group Kemekod. Kemekod later sold the tower to an investment group led by Lawrence I. Linksman in 1982. Linksman promised further renovations to the building, including the possibility of using its north face for signage displays.

Following the sale of the building by the Times, the zipper was operated on an inconsistent basis by various news outlets, and was shut off entirely between 1961 and 1965, and again from 1977 to 1986. In 1986, the ticker was revived by Newsday, which operated it until December 31, 1994. The newspaper declined to renew its lease on the ticker, believing that they "[didn't] get very much out of that sign" financially. Publishing company Pearson PLC operated the zipper for a period beginning on December 31, 1994, until ceding its role to Dow Jones & Company in June 1995.

From 1990 to 1996, Sony operated a Jumbotron on the exterior of the tower. Alongside its use for advertising and news, it was also frequently used by the producers of the late-night talk show Late Show with David Letterman, who could display a live feed from its studio on the screen as well. As a cost-saving measure, Sony declined to renew its lease of the space, leading to the subsequent removal of the Jumbotron in June 1996. Due to its frequent use by Late Show, its producer Rob Burnett jokingly considered the removal of the Jumbotron to be "a sad, sad day for New York."

One Times Square has continued to house tenants in its ground-level floors: in the late 1990s, a Warner Bros. retail store filled the first three floors. In early 2006, the floors were occupied by a J. C. Penney pop-up store known as The J C. Penney Experience. In November 2008, pharmacy chain Walgreens opened a new flagship store in the space, renting it in a lease valued at $4 million yearly. Walgreens also introduced a new digital sign to the building as part of its grand opening: designed by Gilmore Group and constructed by D3 LED, the 17,000-square-foot (1,600 m2) sign runs diagonally up both sides of the building and contains 12 million LEDs, surpassing the nearby NASDAQ sign as the largest LED sign in Times Square. The former electrical room in the tower's basement currently serves as a "vault" for the storage of items relating to New Year's Eve celebrations at Times Square, including the ball itself (prior to 2009), spare parts, numeral signage and other memorabilia.

In September 2017, the building's owners unveiled plans to use much of its vacant space. Under the proposal, a museum dedicated to the history of Times Square would be built on the 15th through 17th floors, and the 18th floor would contain a new observatory. The ground level would also be renovated to provide an expanded entrance to the New York City Subway's Times Square–42nd Street station, which is directly underneath the building. Work was originally supposed to be completed in 2018. However, the MTA did not start construction on the 42nd Street Shuttle reconstruction project until August 2019. As part of the redevelopment of One Times Square, a new 20-foot-wide (6.1 m) staircase entrance with a glass canopy, as well as a new elevator entrance, will be built. A new elevator to the building's observation deck will be installed and maintained by Jamestown Developers.

In 1992, the owners of One Times Square filed for bankruptcy protection. In March 1995, One Times Square was sold to the financial services firm Lehman Brothers for $27.5 million. The new owners felt that it would not be cost-effective to house new tenants in the tower due to the cost of the extensive renovation required in order to make it suitable for tenants as compared to the relatively small rental revenue that its limited floor space would have brought in. Instead, they decided to market the tower as a location for advertising to capitalize on its prominent location within the Square. The entire exterior of One Times Square above the ticker was modified to add a grid frame for mounting billboard signs.

Throughout 1996, One Times Square's first electronic billboards were installed, such as, a Cup Noodles billboard with steam effects was added to the front of the tower, later accompanied by an animated Budweiser sign. In October, a 55-foot video screen sponsored by ITT Corporation was introduced to the top of the tower, which would feature video advertisements and community service announcements. In December 1996, a Panasonic display operated by NBC known as Astrovision was introduced as a replacement for Sony's Jumbotron at the base of the tower.

Lehman Brothers sold One Times Square in 1997 to the Jamestown L.P. for $117 million. Filings related to the sale revealed that the billboards on the tower had been generating a net revenue of $7 million yearly, representing a 300% profit. With growing tourism and high traffic in the Times Square area (with a yearly average of over 100 million pedestrians—alongside its prominence in media coverage of New Year's festivities, seen by a wide audience yearly), annual revenue from the signs grew to over $23 million by the year 2012—rivaling London's Piccadilly Circus as the most valuable public advertising space in the world. 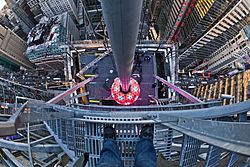 The redesigned roof of One Times Square as seen on December 30, 2012, now featuring the New Year's ball as a permanent addition.

From 1996 to 2006, Nissin Foods operated a Cup Noodles billboard with smoke effects (an effect that had also been famously used by other Times Square billboards, such as the Camel Cigarettes sign). The Cup Noodles billboard was replaced in 2006 by a General Motors billboard featuring a Chevrolet branded clock; however, as a part of cutbacks resulting from GM's bankruptcy and re-organization, the Chevrolet Clock was removed in 2009 and eventually replaced by a Kia Motors advertisement billboard, then in 2010 a Dunkin' Donuts display.

On August 19, 1998, Discover Card replaced ITT Corporation as the operator and sponsor of the top-most screen on One Times Square as part of a ten-year deal. The deal came alongside the announcement that Discover Card would be an official sponsor of Times Square's New Year's Eve 2000 festivities.

In 2006, News Corporation (renamed 21st Century Fox in 2013) replaced NBC as the operator and sponsor of the Astrovision screen. In 2010, Sony returned to One Times Square by replacing the News Corp. Panasonic screen with a new high-definition LED display.

In December 2007, Toshiba took over sponsorship of the top-most screen of One Times Square from Discover Card in a 10-year lease. Throughout 2008, upgrades began to be made to the upper portion of One Times Square; including the installation of new Toshiba high-definition LED displays (known as ToshibaVision), and the redesign of its roof to accommodate a larger New Year's Eve ball, which became a year-round fixture of the building beginning in 2009. On November 23, 2017, Toshiba announced that it would end its One Times Square sponsorship in early 2018, citing ongoing cost-cutting measures.

All content from Kiddle encyclopedia articles (including the article images and facts) can be freely used under Attribution-ShareAlike license, unless stated otherwise. Cite this article:
One Times Square Facts for Kids. Kiddle Encyclopedia.