Originally incorporated as a village in 1867, the history of what is today the City of Orillia dates back at least several thousand years. Archaeologists have uncovered evidence of fishing by the Huron and Iroquois peoples in the area over 4,000 years ago as well as sites used by Native Americans for hundreds of years for trading, hunting, and fishing.

Known as the "Sunshine City", the city's large waterfront attracts many tourists to the area every year, as do a good number of annual festivals and other cultural attractions. While the area's largest employer is Casino Rama, overall economic activity in Orillia is a mixture of many different industries including manufacturing, government services, customer service and tourism. 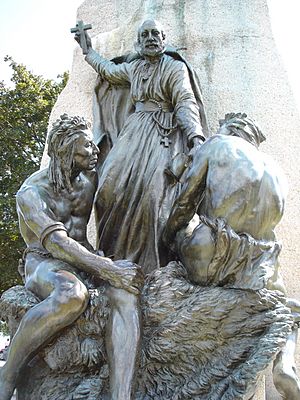 The Christian missionary portion of the Samuel de Champlain monument designed by Vernon March in Orillia. 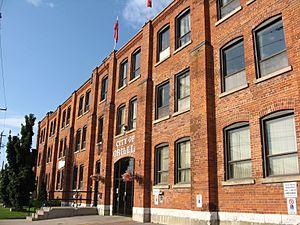 The site of an Ojibwa reserve from 1830 to 1838, Orillia subsequently prospered as an agricultural and lumbering community. Transportation links with Toronto and Georgian Bay stimulated Orillia's development as a commercial centre and summer resort. The village of Orillia was incorporated in 1867 (sharing the same birthyear as Canada), became a town in 1875, and was designated a city in 1969. The city of Orillia is located on the shores of two connected lakes: Lake Simcoe and Lake Couchiching. Both lakes are part of the Trent-Severn Waterway. Travel north on Lake Couchiching, then through three locks and the only marine railway in North America leads to Georgian Bay on Lake Huron. Travel south-east across Lake Simcoe, through many locks (including two of the highest hydraulic lift locks in the world) eventually leads to Lake Ontario. From either of these Great Lakes one can connect to the St. Lawrence and thence to the Atlantic Ocean.

The human history of the region extends back several thousand years: in the "Narrows", a small waterway that connects Lake Couchiching and Lake Simcoe, there is marine archaeological evidence of ancient fishing weirs used by Huron and Iroquois people to trap fish over 4,000 years ago. Also, there are several archaeological sites in the surrounding area that provide evidence of trading, fishing, and hunting camps that were visited for hundreds of years by Native Americans.

William E. Bell's 1989 novel Five Days of the Ghost was also set in Orillia, with many readers recognizing popular local spots, including the Guardian Angels Catholic Church, the Samuel de Champlain statue in Couchiching Beach Park as well as Big Chief Island in the middle of Lake Couchiching.

The first recorded use of the name to describe the region, which until then had no officially sanctioned designation, was in 1820 when the name was given in York, Upper Canada by then Lieutenant-Governor Sir Peregrine Maitland, Maitland was a veteran of the British campaign against the French in Spain, called the Peninsular War, during the Napoleonic Wars where he served under the command of Wellington.

While there are no records clearly indicating the reason for the name Orillia, the most common explanation holds that the name originates in the Spanish, "orilla," which can mean the shore of either a lake or river. The Spanish pronunciation sounds much like, "oreeya," and since the word itself is spelled almost identically to Orillia, without the second, "i," it has come to be commonly accepted as the source word for the city's name. Further backing the theory of a Spanish origin are the names of surrounding communities and landmarks, which include Oro for gold, Mariposa for butterfly, and Mono for monkey. Historical documents contain a second spelling of the name which was never officially recognised, Aurelia, which when pronounced sounds similar to the name and is considered a clerical error.

Orillia is known as the "Sunshine City", taking the moniker from the Sunshine Sketches of a Little Town by Stephen Leacock. Many local businesses also use "Mariposa" in their names. The city council has actively restricted the construction of large buildings downtown and seeks to maintain a certain "small town" look with regard to signs and decorations. However, in 2012 plans were discussed to redevelop the waterfront district and other areas underdeveloped or otherwise vacant. A 3D model was developed at the local Royal Canadian Legion to reflect the possible future and is to be on display in city hall. 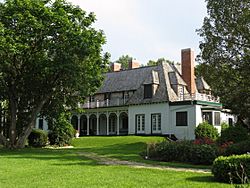 Orillia's "Arts District” is located on Peter St. S., between Mississauga St. E and Colborne St. E. and is home to a variety of art galleries, fine dining and shops. At its centre is The Orillia Museum of Art & History (OMAH), considered the hub of art and culture for the city, playing an instrumental role in municipal cultural events.

The museum occupies all four floors of the historic Sir Sam Steele Building, a landmark destination for both residents and visitors. A collection of over 10 000 artefacts of regional historical significance features in a rotating exhibits schedule. On a separate floor is contemporary art space with exhibits featuring regional and international artists. The museum also features a designated education space and hosts activities including art-making and interpretive programming for children, artists, artisans, historians, etc.

Many tourists and boaters are attracted to the city each year because of its waterfront park Couchiching Beach Park/Centennial Park/Port of Orillia and its position as a gateway to Lake Country, cottage country in Muskoka, Algonquin Provincial Park, and other natural attractions. The city's waterfront has an extensive lakeshore boardwalk, a large park with two beaches, several playgrounds, an outdoor theatre, a touring ferry, and a children's' train.

The city of Orillia also is home to a large number of retirement homes (currently 9, with 4 more under construction). As such, it is often characterized as a "retirement community", although less than 18% of the city's population is actually over 65 (see below).

Orillia is home to an annual Perch Fishing Festival. Perch are netted, tagged, and released into the local lake, to be caught for prize money. This event also includes a large social gathering consisting of a "perch fry". Other popular annual festivals include the Leacock Festival, Blues Festival, Jazz Festival,Scottish Festival, and Beatles Festival (newly added to the city in September 7)

The Port of Orillia holds an annual "Christmas in June", which includes a boat decorating contest and turkey buffet, every June 24. Also, boat and cottage shows are held in June and August.

Orillia also hosts the largest Canada Day event in Central Ontario at Couchiching Beach Park. The day begins with the traditional pancake breakfast served by the Mayor and Council and ends with a large fireworks display.

Orillia is the original and current site of the popular Mariposa Folk Festival.

The Royal Canadian Legion sponsors a yearly Scottish Festival at Couchiching Beach Park and Centennial Park in July each year. Marching bands from around the country participate.

Since 1963, the Webers hamburger restaurant has been located approximately 1 km north of Orillia, next to Ontario Highway 11. 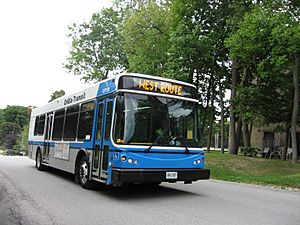 Orillia Transit provides service on five routes throughout the city. All of these routes run on loops which depart and end at the downtown bus terminal on the West St. and Mississaga St. intersection. 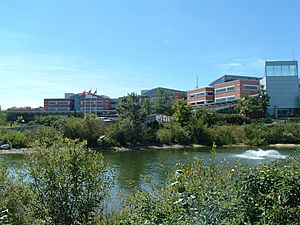 As part of an initiative to decentralise its services, the provincial government relocated the headquarters of the Ontario Provincial Police to Orillia. The office was initially located in the Tudhope Building downtown (part of which is currently used as the Orillia City Hall) until the new building was opened in 1995. The headquarters, known as the Lincoln M. Alexander Building, is located on Memorial Avenue near the Huronia Regional Centre. The building houses the assorted bureaus and divisions that make up the general headquarters, as well as the Provincial Police Academy, and The OPP Museum.

OPP Central Region Headquarters is located on Hurtubise Road, near the intersection of Hwy 12 and Memorial Avenue.

The OPP also provides municipal policing to the City of Orillia under contract from a detachment located in the downtown core. The city's police force was disbanded when the policing contract began in 1996.

All content from Kiddle encyclopedia articles (including the article images and facts) can be freely used under Attribution-ShareAlike license, unless stated otherwise. Cite this article:
Orillia Facts for Kids. Kiddle Encyclopedia.