The mission of the Zoological Society of the Palm Beaches, Inc. (Palm Beach Zoo & Conservation Society) is "to inspire people to act on behalf of wildlife and the natural world." 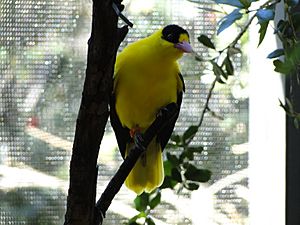 In 1951, the city of West Palm Beach paid the state of Florida $100 for Bacon Park. Bacon Park was formerly used for a landfill and a tent city campground, which was destroyed in the 1928 hurricane. Bacon Park was renamed Dreher Park in 1957 after Parks Superintendent Paul Dreher. As part of its transformation, Dreher built a red barn in Dreher Park. Using his own money, Dreher bought one goat, two ducks, one goose, and two chickens for the petting zoo. The zoo became known as the Dreher Park Zoo.

On February 29, 1964, a locally famous animal known as Joey, the kangaroo, became a resident of the zoo. Joey was a pet that was infamous for escaping from his home and wandering around the city. Joey was featured in two issues of Life Magazine in October 1961 and April 1964 and was declared an honorary member of the Boy Scouts of America. A frequent visitor to Joey's home was President Kennedy's daughter Caroline Kennedy. Joey was later the victim of a ban that did not allow for him to stay as a house pet and was moved to the Dreher Park Zoo.

In the early 1960s, a petting zoo is known as "Jett's Petting Zoo" visited South Florida, bringing with a young Asian elephant. Residents of South Florida campaigned for the purchase of the young elephant, now named Toppie, for the zoo. The West Palm Beach Firemen's Benevolent Association helped raise 1,000 books of Top Value Trading Stamps for the purchase, after which the elephant was named. On April 16, 1965, Toppie, the four-year-old, 2,000-pound elephant, arrived at the zoo where she would live until her later transfer to Lion Country Safari in 1975.

In 1969, Hammer, the black bear, arrived at the zoo. Hammer was one of the bears used in the television show, Gentle Ben. In 1973, Princess the Bengal tiger came to the zoo, becoming the zoo's first big cat. In 1978, Zelda and Henrietta, the pygmy hippos, arrived. These hippos remained at the zoo until 1982. In 1981, the zoo built the first outdoor exhibit for Goeldi's monkeys to ever exist. In 1987, Townee, the Bengal tiger, arrived at the zoo. The Florida Fish and Wildlife Commission confiscated Townee after being illegally held as a pet in Miami. Townee died in 2007, living to be one of the oldest tigers in the United States. In March 1989, the Association of Zoos and Aquariums accredited the Dreher Park Zoo. On March 17, 1995, Colin, the Florida panther, was born. Colin remained a resident of the zoo for 17 years.

In 1997, the Dreher Park Zoo changed its name to the Palm Beach Zoo. A donation by George and Harriett Cornell allowed the zoo to plan a $30 million redevelopment of the park. On March 19, 2000, Tiger Falls opened to the public. The zoo has since had three tiger cubs born in 2011. In 2001, the zoo opened the Florida Pioneer Trail, a re-creation of a cypress swamp habitat. In 2003, the zoo's Interactive Fountain and Orientation Plaza opened. In 2004, the zoo opened the 18-million dollar "George and Harriett Cornell Tropics of the Americas," a three-acre exhibit complex. The Palm Beach Zoo opened "Wallaby Station" and "Koala Forest" in 2010, which highlight wildlife from Australia. 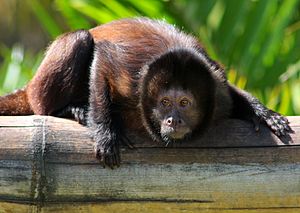 The Melvin J. and Claire Levine, Animal Care Complex, opened on April 22, 2009. The 10,000 square foot facility is a five-million-dollar animal hospital and is America's first LEED-certified zoo animal hospital. In 2014, the Palm Beach Zoo changed its name to the Palm Beach Zoo and Conservation Society. The zoo now houses over 550 animals on 23 acres and has over 300,000 visitors annually.

In 2018, Margo McKnight became the new director and CEO of the Palm Beach Zoo with plans to improve the security of the zoo for the sake of the safety of both animals and workers, after some controversial and fatal incidents in previous years.

The Wetlands displays a portrayal of a Florida swamp and showcases the following animals:

This section of the park is dedicated to the animals native to all different parts of Asia. Here, visitors will find:

Tropics of the Americas

This 18 million-dollar exhibit complex opened in 2004 and features animals and the Mayan culture found in Central and South America. The exhibit is located on a three-acre peninsula in the zoo. Animal Planet featured Tropics of the Americas on the television show "Ultimate Zoo" in 2006. The exhibit features two Mayan pyramids that are over 40 feet tall, a nocturnal building displaying reptiles and bats, and a walk-through cave, among other displays and houses animals found in Central and South America such as:

This section of the zoo showcases different species of animals from islands all over the world including:

Harriet W. and George D. Cornell Tropics of the Americas

This 18 million-dollar exhibit complex opened in 2004 and features animals and the Mayan culture found in Central and South America. The exhibit is located on a three-acre peninsula in the zoo. Animal Planet featured Tropics of the Americas on the television show "Ultimate Zoo" in 2006. The exhibit features two Mayan pyramids that are over 40 feet tall, a nocturnal building displaying reptiles and bats, and a walk-through cave, among other displays. Capybara, blue and gold macaw, bush dog, jaguar, giant anteater, Baird's tapir, capuchin monkey and Mexican spider monkey are among the species exhibited in this complex.

In March 2015, the zoo opened its "Tiger River" habitat, adding an extra exhibit yard to the Henry and Charlotte Kimelman Tiger Habitat. 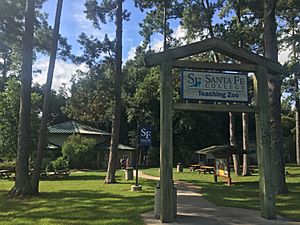 The Palm Beach Zoo is home to the Melvin J. & Claire Levine Animal Care Complex, which serves as the headquarters for the Palm Beach Zoo Conservation Society. The complex has earned Gold Certification for Leadership in Energy and Environmental Design (LEED) by the Green Building Council. The Melvin J. and Claire Levine Animal Care Complex. It also houses the Center for Conservation Medicine.

The Palm Beach Zoo Education Department is an organization hosting multiple programs to children from ages 3 to 18 to educate and spread awareness to children and adolescents about conservation efforts and their significance. The department provides entertainment to members as well as hands-on experiences with the zoo's attractions as well as the opportunity to partake in active conservation projects. Programs include the Zoo Camp, Overnight Adventures, the Ed Morse ZooMobile, and other opportunities for schools, scout troops, and community groups looking for involvement in the zoo's conservation projects.

In collaboration with Madidi National Park in Bolivia and the Wildlife Conservation Society (WCS), the Palm Beach Zoo provides funding and staff for conservation activities in a protected area of approximately 18,900 kilometers squared. The area protects jaguars, black faced spider monkeys, lowland tapir, giant river otters, Andean bears, Andean condors and other wildlife abound in this remote sector of the Amazon. New Species are still being discovered to this day. The region is also home to eleven indigenous groups that are also contributing to the preservation of the area and its wildlife.

Closed on Thanksgiving and Christmas Days.

All content from Kiddle encyclopedia articles (including the article images and facts) can be freely used under Attribution-ShareAlike license, unless stated otherwise. Cite this article:
Palm Beach Zoo Facts for Kids. Kiddle Encyclopedia.