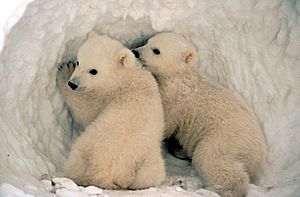 The polar bears have white fur

Fur is the hair of mammals. Different species may have quite different styles of hair, making them more or less suitable to the fur trade. 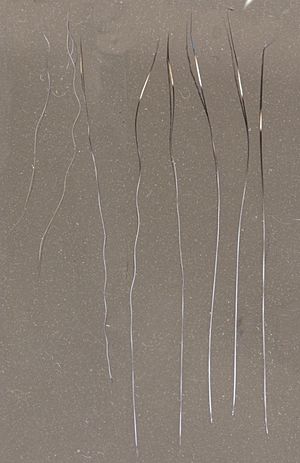 Down, awn and guard hairs of a domestic tabby cat

Mammals with well-developed down and guard hairs also usually have large numbers of awn hairs. These begin their growth much as guard hairs do, but change their mode of growth, usually when less than half the length of the hair has emerged. This portion of the hair is called awn. The rest of the growth is thin and wavy, much like down hair. In many species of mammals, the awn hairs comprise the bulk of the visible coat. The proximal part of the awn hair shares the function of the down hairs, whereas the distal part aids the water-shedding function of the guard hairs, though their thin basal portion prevents their being erected like true guard hairs. 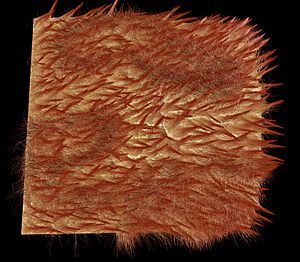 Hair is one of the defining characteristics of mammals; however, several species or breeds have considerably reduced amounts of fur. These are often called "naked" or "hairless".

Some mammals naturally have reduced amounts of fur. Some semiaquatic or aquatic mammals such as cetaceans, pinnipeds and hippopotamuses have evolved hairlessness, presumably to reduce resistance through water. The naked mole-rat has evolved hairlessness, perhaps as an adaptation to their subterranean life-style. Two of the largest extant mammals, the elephant and the rhinoceros, are largely hairless. The hairless bat is mostly hairless but does have short bristly hairs around its neck, on its front toes, and around the throat sac, along with fine hairs on the head and tail membrane. Most hairless animals cannot go in the sun for long periods of time, or stay in the cold for too long.

Humans are the only primate species that have undergone significant hair loss. The hairlessness of humans compared to related species may be due to loss of functionality in the pseudogene KRTHAP1 (which helps produce keratin) in the human lineage about 240,000 years ago. Mutations in the gene HR can lead to complete hair loss, though this is not typical in humans.

Sheep have not become hairless; however, their pelage is usually referred to as "wool" rather than fur.

At times, when a hairless domesticated animal is discovered, usually owing to a naturally occurring genetic mutation, humans may intentionally inbreed those hairless individuals and, after multiple generations, artificially create breeds that are hairless. There are several breeds of hairless cats, perhaps the most commonly known being the Sphynx cat. Similarly, there are several breeds of hairless dogs. Other examples of artificially selected hairless animals include the hairless guinea-pig, nude mouse, and the hairless rat. 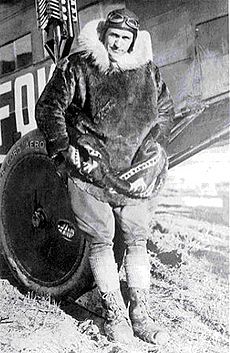 In clothing, fur is usually leather with the hair retained for its aesthetic and insulating properties. Fur has long served as a source of clothing for humans, including Neanderthals. Animal furs used in garments and trim may be dyed bright colors or to mimic exotic animal patterns, or shorn down to imitate the feel of a soft velvet fabric. The term "a fur" is often used to refer to a fur coat, wrap, or shawl.

Usual animal sources for fur clothing and fur trimmed accessories include fox, rabbit, mink, beavers, ermine, otters, sable, seals, coyotes, chinchilla, raccoon, and possum. The import and sale of seal products was banned in the U.S. in 1972 over conservation concerns about Canadian seals. The import and sale is still banned even though the Marine Animal Response Society estimates the harp seal population is thriving at approximately 8 million. The import, export and sales of domesticated cat and dog fur were also banned in the U.S. under the Dog and Cat Protection Act of 2000.

The manufacturing of fur clothing involves obtaining animal pelts where the hair is left on the animal's processed skin. In contrast, making leather involves removing the hair from the hide or pelt and using only the skin. The use of wool involves shearing the animal's fleece from the living animal, so that the wool can be regrown but sheepskin shearling is made by retaining the fleece to the leather and shearing it. Shearling is used for boots, jackets and coats and is probably the most common type of skin worn.

Fur is also used to make felt. A common felt is made from beaver fur and is used in high-end cowboy hats.

All content from Kiddle encyclopedia articles (including the article images and facts) can be freely used under Attribution-ShareAlike license, unless stated otherwise. Cite this article:
Fur Facts for Kids. Kiddle Encyclopedia.