Pitt Meadows is a city in southwestern British Columbia, Canada and a member municipality in Metro Vancouver. Incorporated in 1914, it has a land area of 85.38 square kilometres and a population of 18,200 (as of 2014). The City could achieve a population of 21,000 by 2021, with approximately 8,000 dwelling units in the urban area.

Aboriginal people resided in the Pitt Meadows area approximately 1000 years ago. James McMillan explored the area in 1874. Europeans started a settlement known as Bonson's Landing in the area in the 1870s. Early settlers were mostly Anglo-Saxon until after 1910.

The Municipality of Maple Ridge, which included the Pitt Meadows area, was incorporated in 1874. In 1885, the Canadian Pacific Railway was constructed through Pitt Meadows to Port Moody, British Columbia. 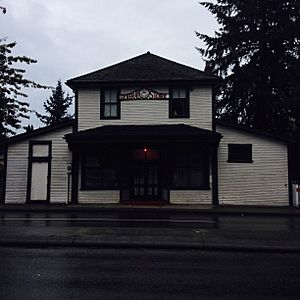 The Pitt Meadows General Store, which was constructed in 1886, was moved to its current location in 1908. A garden has existed since the early years of development on the Site. The store, which contained the community's first Post Office and the first telephone, has been the home of the Pitt Meadows Museum and Archives since June 1998.

In 1892, residents of the Pitt Meadows area petitioned for their removal from the District of Maple Ridge. In 1893, the first dyking district was organized. The major Fraser River Flood event flooded many acres of land in the spring of 1894. 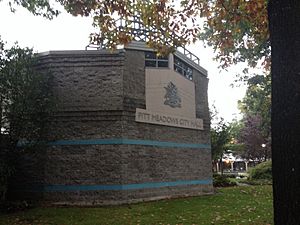 Pitt Meadows reverted to unorganized territory from 1892 until it was separately incorporated as a municipality in 1914. The Municipality takes its name from the Pitt River and Pitt Lake, which were possibly named after former British Prime Minister William Pitt. In 1914, Pitt Meadows was a small, agricultural community of less than 250 individuals which supplied Vancouver and New Westminster with produce and dairy products. After 1910, many French Canadians and Japanese arrived as settlers. 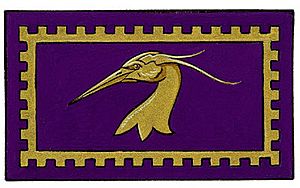 Herald of Pitt Meadows, BC

A large group of Dutch farmers reclaimed much of the low-lying land in Pitt Meadows after World War II. Pitt Meadows joined the Greater Vancouver Water District in 1948.

In 1948, a major flood occurred in the Fraser valley after cool weather through mid-May allowed an unusually large snowpack to accumulate, and a sudden shift to warm temperatures caused a fast melt.

A highway bridge was constructed in 1957 over the Pitt River.

A Heritage Preservation Area contains several buildings of significant heritage value, including the old General Store (now the Pitt Meadows Museum) and Hoffman and Sons Garage. Hans Hoffmann, a mechanic, worked in and then ran the family business of Hoffmann and Son Ltd. for almost 45 years. In 1974, Hans began his hobby of collecting and restoring stationary gasoline engines. The Pitt Meadows Airport opened in 1963.

The Widgeon Valley National Wildlife Area (NWA), which is 125 ha in size located near Pitt Lake, was purchased by the Nature Trust of British Columbia in 1973 and declared a NWA in October 1973. Nearby areas of high wetland value include Widgeon Slough and Addington Point along the Pitt River, the shallow southern end of Pitt Lake, and the extensive dyked wet areas of the Pitt Meadows. As a result the valley is highly attractive to wildlife and for human recreational pursuits.

In 1990, the Pitt Meadows Cenotaph was constructed "in memory of all those who have served and died for us." The City of Pitt Meadows received funding for the restoration of the Pitt Meadows Cenotaph, in 2009. In 2012, British Columbia formally apologized to the Japanese-Canadian community for the internment of thousands of people during the Second World War. Tosh Suzuki's family spent nine years in Manitoba after being displaced from its Pitt Meadows berry farm.

In 1995, Pitt Meadows became a member municipality of Metro Vancouver. Pitt Meadows is one of 21 municipalities plus Electoral Area “A” that comprises the Greater Vancouver Regional District. 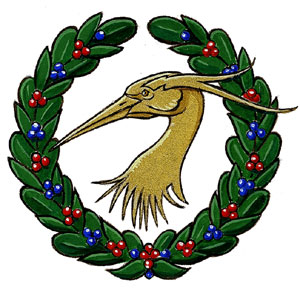 Blazon of Pitt Meadows, BC

The announcement of the Letters Patent for Pitt Meadows, and Grant of Arms, Supporters, Flag and Badge was made on March 12, 2005, in Volume 139, page 688 of the Canada Gazette. The Arms consist of the colours purple and gold, its heron emblem and a band running parallel to the edge of the shield which represents the dykes which protect the lands of the municipality. The crenellated outer edge represents gearwheels and refer to the historic Hoffman garage. The horizontal bands symbolize the CP railway line around which the District grew. The motto is Prosperity through endeavour. The crest coronet represents Golden Ears peaks to the north of the District. The white drops in the crest recall the early dairy industry. The Katzie eagle symbol in the crest recalls the original Aboriginal inhabitants and recreational aviation. Since 2005, The Pitt Meadows Museum has been hosting lower mainland paranormal groups for investigations and public presentations.

In 2007, emergency workers knocked on thousands of doors in Pitt Meadows and Maple Ridge, warning residents to prepare for flooding that could put 95 per cent of Pitt Meadows under water.

Pitt Meadows is located in the Lower Fraser Valley, east of Vancouver. Most residents live in the urban town centre, which is located on a highland area. Eighty-two percent of Pitt Meadows is within the Green Zone, lands, including watersheds and 200 year floodplains, forests, wilderness areas, wildlife habitats, wetlands, recreational areas, farms and forestry areas that fundamental to Metro Vancouver’s character and ecology. Pitt Meadows, an agricultural town, is over 68% within a flood plain with eighty-six percent of Pitt Meadows lying within the BC Agricultural Land Reserve as protected farmland. Lands designated as environmentally sensitive include wildlife conservation areas, such as Pitt-Addington Marsh and Codd Wetland Ecological Conservancy Area and the banks of the Fraser, Pitt and Alouette Rivers. Other areas within Pitt Meadows that are within the Green Zone include: most of the area on the river side of the dikes; Municipal parks and greenways. 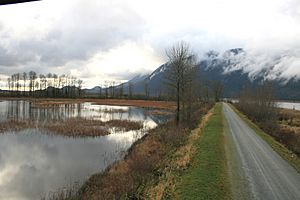 Pitt Meadows is sandwiched on the north side of the Fraser River at its junction with the Pitt River on the west and Maple Ridge on the east. Two arms of the Alouette River run through Pitt Meadows, along with a number of other sloughs and waterways. To the north, Pitt Lake is the largest fresh water tidal lake in the world, connected by the Pitt River to the Fraser River, which is the southern boundary of Pitt Meadows. The Pitt River flows backwards at high tide and has created a delta where it joins the lake. The Thompson Mountain Range rises along the Pitt Meadows’s northeast edge. Pitt Meadows is protected from flooding by Sixty-four kilometres of dikes which provide a multi-use trail system alongside the farmland and marshes, and offer views of the mountains to the North. The northern sector of the flood plain, closest to Pitt Lake, presents several challenges to development, it is largely a peat bog including a large wildlife refuge. The deep peat and bog soil conditions sometimes require considerable fill and/or pre-loading prior to development. On the west side of the Pitt River is Port Coquitlam. Pitt Meadows is located between the rapidly developing communities of Coquitlam, Port Coquitlam, Maple Ridge, Surrey and Langley. 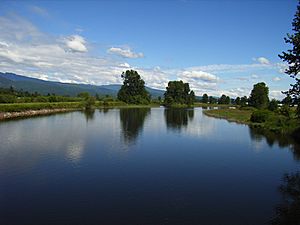 Pitt Meadows is naturally isolated from the rest of the Lower Mainland by the Pitt River and the Fraser River. The Fraser, Pitt and Alouette Rivers played a pivotal role in the development of Pitt Meadows by providing transportation routes, fishing areas and nourishing flood water to the farm areas. Today, the Fraser River is an extensively used navigation channel for both industrial traffic and recreational use. Although the Pitt River sees less traffic, its foreshore is an important area for log storage. The Alouette River continues to be important to the farming areas. 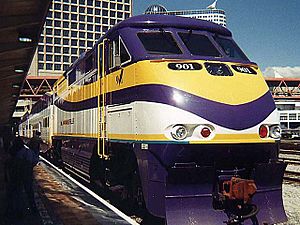 Its first land-based transportation route came in 1885 with the construction of the Canadian Pacific Railway through to Port Moody. The main portion of the town of Pitt Meadows is bisected by the CPR mainline. The highway bridge over the Pitt River was opened in 1957. As of 2003, the CPR intermodal yards and distribution centre west of the Pitt Meadows Station in the town centre are being expanded.

In 1963 the Pitt Meadows Airport was opened. There are height restrictions on buildings due to the proximity of the Pitt Meadows Airport to the southeast, although the recent development of a 10 story building less than 2 kilometres from the East-West runways puts those restrictions in doubt. In 2003, the airport was undergoing expansion to support scheduled passenger service for short-haul prop-driven planes. The airport is also home to a skydiving school, as well as a number of other businesses. On August 3, 2008, a Beech 65-A90 King Air took off from Pitt Meadows Airport, B.C., with the pilot and seven parachutists for a local sky diving flight. The pilot reported an engine failure and turned back towards Pitt Meadows Airport, which could not be reached and a forced landing was carried out in a cranberry field, 400 m west of the airport. Four of the parachutists received serious injuries and the aircraft was substantially damaged although there was no fire and the occupants were evacuated. Pitt Meadows Water Aerodrome, (TC LID: CAJ8), is located 1 nautical mile (1.9 km; 1.2 mi) southwest of Pitt Meadows. 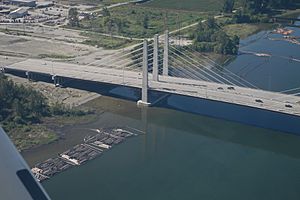 The Pitt River Bridge and Mary Hill Interchange Project included a new seven-lane bridge that replaced the existing swing bridges, as well as an interchange to replace the current Lougheed Highway and Mary Hill Bypass intersection. Golden Ears Bridge, which connects Pitt Meadows and Maple Ridge to Surrey and Langley, opened in 2009. Golden Ears is the name of the summit that lies North of Pitt Meadows. In 2011, Lougheed Highway upgrades included the widening and extension of the westbound HOV lane between the Golden Ears Bridge and Harris Road, the addition of bus queue jump lanes in both directions, at the Kennedy Road intersection leading to and from the Pitt River Bridge. The Golden Ears Bridge, completed in summer of 2009, connects Pitt Meadows and Maple Ridge with the communities of Langley and Surrey south across the Fraser River. The bridge is operated as a toll bridge; Translink has stated it would take over 30 years for the bridge to be paid off via tolls. Construction of the new Pitt River Bridge, connecting Pitt Meadows with Port Coquitlam to the west, was completed in autumn 2009; unlike the Golden Ears, the new Pitt River Bridge is not a toll bridge.

The Pitt Meadows Paddling Club received the 2011 Maple Ridge-Pitt Meadows Accessibility and Inclusion Award in both the Leisure and Recreation and the Volunteer Categories; the PaddleALL programs are for individuals with cognitive and physical disabilities. Access Transit provides accessible door-to-door transportation service in the Metro Vancouver region, which includes Pitt Meadows using specially equipped vehicles designed to carry passengers with physical or cognitive disabilities who are unable to use public transit without assistance. 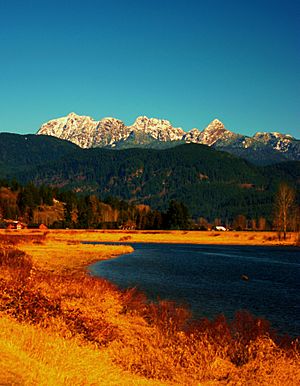 In Pitt Meadows, there are cultural, recreation and other community facilities and public uses in the Civic Centre, the Town Centre and the Sawyer’s Landing Waterfront Village. River access park areas provide active and passive use, parking, viewpoints and picnic use. There are public sports facilities, open spaces, trails and bike paths, protected natural areas and recreational programs. Indoor recreational facilities in Pitt Meadows include a recreation centre and ice skating rinks. Joint agreements with Maple Ridge and the School District allow the provision of community recreation facilities and programs to Pitt Meadows residents. Outdoor recreational opportunities include a system of dikes top trails along the river systems of Pitt Meadows for walking, cycling and equestrian use as well as boating opportunities on the Alouette, Fraser and Pitt Rivers.

All content from Kiddle encyclopedia articles (including the article images and facts) can be freely used under Attribution-ShareAlike license, unless stated otherwise. Cite this article:
Pitt Meadows Facts for Kids. Kiddle Encyclopedia.