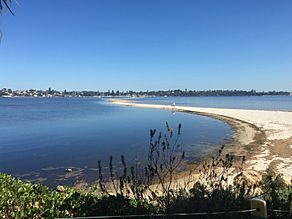 The sandbar as viewed from Point Walter.

Point Walter (Noongar: Dyoondalup) is a point on the Swan River, Western Australia, notable for its large sandbar that extends into the river. It is located on the southern shore of Melville Water, and forms its western end. Point Walter is located in the suburb of Bicton, approximately 12 kilometres (7 mi) south of the Perth central business district, and 7 kilometres (4 mi) north-east of Fremantle, and is on the opposite side of the river to the suburbs of Mosman Park, Peppermint Grove, and Dalkeith.

Point Walter is a site of Aboriginal Australian heritage, both for its place in the Dreamtime and because of the local Whadjuk people's historical activities at the site. Named in 1827 by James Stirling, it was popular among the public for its variety of recreational activities and its facilities, such as tea rooms, a bathing house and a tavern. Through a series of events, the point suffered a drop in patronage from the late 19th century to World War II. At that time, it was rehabilitated from a state of disrepair, and an army camp was built on the premises, which was later transformed into a migrant settlement camp. Since the migrant camp's closure in 1972, the facilities have been used for multiple activities.

Since 1912 Point Walter has been run by Melville City Council, and today is contained in the Point Walter Reserve. The reserve and the sandbar serve as important sites for flora and fauna, particularly bird-life. It is popularly used for a variety of recreational activities, and currently hosts the annual Point Walter concert.

Point Walter is notable for the sand bar or spit that extends over 1 km into the river, sections of which often submerge under high water. The Sandbar is a prevalent in Dreamtime of the local Aboriginals, the Beeliar family, who were part of the Whadjuk Noongars. The group believed the Sandbar was the hair of the Charnok woman Junda. The nearby cliffs at Blackwall Reach were her footprints. The Charnok woman is said to have carried spirit children in her hair, who, when they fell out, formed rock. When she reached Wave Rock, she jumped off it into the sky, with her hair forming the milky way and the spirit children forming the stars. The area was known to Aboriginals as Dyoondalup/Dyundalup, meaning in Noongar 'Place of Long Flowing White Hair' or 'Place of white sand'. Blackwall Reach is known to the Aboriginals as Jenalup, a word meaning 'The Place Where Feet Make a Track.' It was a woman's place, and when the group wanted to move to another part of the river, the men would swim across the river to the sandbank, where they would meet the women, as it was a meeting place.

The Sandbar is home to the nesting grounds of several bird species. They include the Pied Oystercatchers, the Red-Capped Plovers, Black Swans and the Fairy Tern. The local government has made a conservation effort with the campaign 'Don't Buzz That Bird', telling people not to get too close to them.

It is the site of various cultural monuments and activities, including a war memorial avenue and the free Point Walter concert, featuring people such as James Morrison. In the past the venue has hosted the 'YAC it up', which featured Birds of Tokyo and Bob Evans. Point Walter also contains Walters River Café.

Point Walter also contains the Point Walter Recreation and Conference Centre, a centre initially set up as a migrant camp in 1948 until 1972, when it was used by the Education department as a home for the Graylands Teachers College. Since the 1980 take over by the Ministry for Youth, Sport and Recreation, it has been run as a recreation camp. It received a renovation in 1986 in which the migrant camp buildings were destroyed, and after reopening it hosted members of the Costa Smerelda Yacht Club - an Italian Syndicate that was part of the American Cup held in Fremantle. It was again refurbished in 2005 through funding from the DRS Capital Woks Program.

In 2012 Natural Area Management was contracted by the City of Melville to undergo reversal of erosion that had occurred over the last 10 years due to losses of beaches and grassed areas, factors aided by the undercutting of tree roots. Through finishing initial works in 2013, the area was completed in early 2014.

All content from Kiddle encyclopedia articles (including the article images and facts) can be freely used under Attribution-ShareAlike license, unless stated otherwise. Cite this article:
Point Walter Facts for Kids. Kiddle Encyclopedia.