Port Douglas is a town in Far North Queensland, Australia, approximately 70 km (40 mi) north of Cairns. Its permanent population was 3,205 at the time of the 2011 census. The town's population can often double, however, with the influx of tourists during the peak tourism season May–September. The town is named in honour of former Premier of Queensland, John Douglas. Port Douglas developed quickly based on the mining industry. Other parts of the area were established with timber cutting occurring in the area surrounding the Daintree River and with settlement starting to occur on lots around the Mossman River by 1880.

Port Douglas was No. 3 on Australian Traveller magazine's list of 100 Best Towns In Australia. 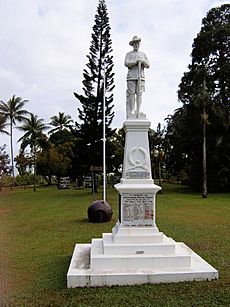 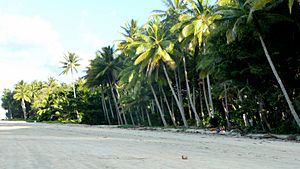 The Port Douglas township was established in 1877 after the discovery of gold at Hodgkinson River by James Venture Mulligan. Port Douglas Post Office opened on 1 September 1877. It grew quickly, and at its peak Port Douglas had a population of 12,000 and 27 hotels. With the construction of the Mulligan Highway it serviced towns as far away as Herberton.

When the Kuranda Railway from Cairns to Kuranda was completed in 1891, the importance of Port Douglas dwindled along with its population. A cyclone in 1911 which demolished all but two buildings in the town also had a significant impact. At its nadir in 1960 the town, by then little more than a fishing village, had a population of 100.

The Port Douglas War Memorial was unveiled on 10 February 1923 by Mrs Tresize.

In the late-1980s, tourism boomed in the region after investor Christopher Skase financed the construction of the Sheraton Mirage Port Douglas Resort.

Port Douglas has a number of heritage-listed sites, including:

In November 1996 United States President Bill Clinton and First Lady Hillary Clinton chose the town as their only holiday stop on their historic visit to Australia. When dining at a local restaurant they witnessed a couple's wedding certificate. On a return visit on 11 September 2001, the then ex-President was again dining at the Salsa Bar and Grill, a local restaurant, when he was advised of the 11 September attacks. He returned to the United States the following day.

The town has enjoyed a steady influx of full-time residents since its 'rebirth', with most newcomers arriving from Australia's south, namely Victoria and Tasmania.

On 4 September 2006, entertainer a.k.a. "Crocodile Hunter" Steve Irwin died at Batt Reef, off Port Douglas, after a stingray barb went through his chest into his heart while Irwin and his crew were filming a documentary called The Ocean's Deadliest. Irwin was filmed snorkelling directly above the stingray when it lashed him with its tail, embedding its toxic barb. Irwin died almost immediately. This event was widely reported both in Australia and overseas.

The Port Douglas Carnivale is held during the end of May and runs for 10 days over two weekends beginning with the Macrossan Street Parade attracting over 10,000 people.

The second festival period is held through October and November with The Sunset in the Park Music Festival and Porttoberfest North Queensland's very own Beer Festival are held on the middle and last weekends of October.

The first weekend in November Port Douglas turns into an athletes' village to host the Canegrowers Great Barrier Reef Marathon Festival. Steve Moneghetti is the event ambassador and competitors get the chance to race against the Marathon Olympian in the Steve Moneghetti Marathon.

In 2012, Port Douglas was the pole position for a Total Solar Eclipse. This phenomenon took place at 6:38 am on 14 November 2012. The total eclipse was visible from approximately Innisfail in the south to Cedar Bay National Park in the North. Port Douglas was right in its path. Thousands travelled to Port Douglas to see the event.

The Music Video for Kylie Minogue's 1988 single "it's no secret" was filmed on location in Port Douglas. 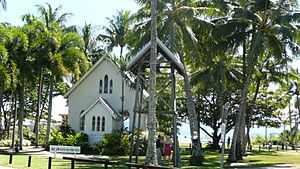 Port Douglas has a tropical monsoon climate according to Köppen climate classification (Am), with hot summers and warm winters, with heavy rainfall primarily occurring from January–March, the wettest month of the year typically being February. 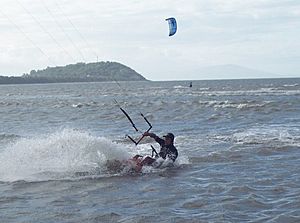 Kitesurfing is popular at the southern end of Four Mile Beach, particularly during the winter months when trade winds blow from the South.

Port Douglas is near the Great Barrier Reef. Numerous companies run daily trips from the marina to the outer reef and the Low Isles for scuba diving and snorkelling. Port Douglas is also well known for its many restaurants, walks, golf courses, and five star resorts.

All content from Kiddle encyclopedia articles (including the article images and facts) can be freely used under Attribution-ShareAlike license, unless stated otherwise. Cite this article:
Port Douglas Facts for Kids. Kiddle Encyclopedia.