Prince Albert National Park encompasses 3,874 square kilometres (1,496 sq mi) in central Saskatchewan, Canada and is located 200 kilometres (120 mi) north of Saskatoon. Though declared a national park March 24, 1927, it had its official opening ceremonies on August 10, 1928 performed by Prime Minister William Lyon Mackenzie King. This park is open all year but the most visited period is from May to September. Although named for the city, the park's main entrance is actually 80 km (50 mi) north of Prince Albert via Highways 2 and 263 which enters the park at its southeast corner. Two additional secondary highways enter the park, No. 264, which branches off Hwy. 2 just east of the Waskesiu townsite, and No. 240, which enters the park from the south and links with 263 just outside the entry fee-collection gates.

The hamlet Waskesiu Lake is the only settlement within the park, located on the southern shore of the same-named lake. Most facilities and services one would expect to find in a multi-use park are available. Otherwise, the park is not located within any rural municipality, and is politically separate from the adjacent Northern Saskatchewan Administration District (NSAD).

This Canadian park also contains the cabin of naturalist and conservationist Grey Owl, on Ajawaan Lake.

Until the establishment of Grasslands National Park in the 1980s, it was the province's only national park. 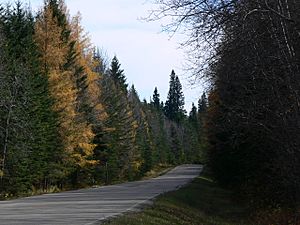 Prince Albert National Park represents the southern boreal forest region of Canada. It is a rolling, mostly forested landscape that takes in the drainage divide between the North Saskatchewan and Churchill Rivers.

The very southern part of the park is predominantly aspen forest with an understorey of elderberry, honeysuckle, rose and other shrubs and openings and meadows of fescue grassland. The fescue grasslands are considered ecologically important because of their rarity; outside the park, most of the native fescue grasslands have been lost to the plough or to urban development. The aspen forest/meadow mosaic in the southwest corner of the park is particularly unique as it sustains a growing herd of more than 400 plains bison, the only free-ranging herd in its original range in Canada that has a full array of native predators, including timber wolves.

Most of the park is dominated by coniferous forests, with the cover of jack pine and white spruce becoming more prevalent the farther north one goes. Boreal woodland caribou from a regional population that is declining due to loss of habitat to forest logging range sometimes into the park, but their core habitat lies outside the park to the north. White-tailed deer, elk and, locally, moose are the common ungulates. Wolves are fairly common.

The park is noted for its numerous lakes including three very large lakes - Waskesiu, Kingsmere and Crean. The water quality is high and fish populations robust, except for lake trout that were commercially fished to near-extinction in Crean Lake in the early 20th century and, in spite of protection, have yet to recover their former numbers. Northern pike, walleye, suckers and lake whitefish are among the most common larger fish. One of Canada's largest white pelican colonies nests in an area closed to public use on Lavallee Lake in the northwest corner of the park, and pelicans, loons, mergansers, ospreys and bald eagles are common in summer. Otters are seen regularly, year round. Winter is an especially good time to find otters as they spend considerable time around patches of open water on the Waskesiu Lake Narrows and the Kingsmere and Waskesiu Rivers.

The boreal forest extends northerly into the Canadian Shield area from the agricultural zones of southern Canada. Prince Albert National Park lies south of the Shield in landscapes that were shaped by Pleistocene glaciers that deposited glacial till, sand and other materials that were later colonized by trees and shrubs. The ecosystems of Prince Albert National Park are lush and productive. During the warm, humid summers there is abundant insect life and numerous fungi, sustaining a remarkable diversity of boreal birds and other wildlife. There are many lakes and rivers creating wonderful water systems for a variety of waterfowl.

Some of the many animals are elk, moose, red foxes, beavers, white-tailed deer, badgers, bison, river otters, red squirrels, black bears, coyotes, and timber wolves. A herd of plains bison roams in the southern areas of the park where grasslands mix with woodlands. Flycatchers, Tennessee warblers, double-crested cormorants, red-necked grebes, brown creepers, nuthatches, three-toed woodpeckers, bald eagles, osprey, great blue herons, many species of ducks, and the common loon are just a few of the water fowl and birds which make their home in the park. There are 21 species of fish recorded in the park, including Iowa darter, yellow perch, brook stickleback, spottail shiner, cisco, northern pike (locally called "jack fish"), walleye (locally called "pickeral"), and lake trout. Although most people visit the park in summer, the best wildlife watching is often in the winter. 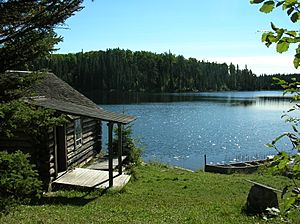 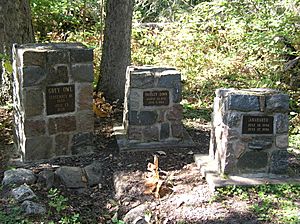 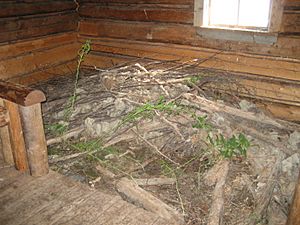 There are archeological traces of pre-history in the park reserve in the form of tools which have been located.

At Waskesiu Lake was an early Hudson's Bay Company fur trade post between 1886 and 1893.

In 1908-1909 the New Northwest expeditions led by Frank Crean were the first to document the region, with the extensive use of photography and the mapping of lakes. Crean lake was named in honor of Frank.

In the early 20th century the industries of fishing and logging were carried out in this boreal forested area. The large 1919 forest fire eliminated the logging industry.

The park was the subject of a short film in 2011's National Parks Project, directed by Stéphane Lafleur and scored by Andre Ethier, Mathieu Charbonneau and Rebecca Foon.

The Dominion Parks Service hired Grey Owl, Archibald Stanfield Belaney (1888-April 13, 1938), as the first naturalist. He lived on Ajawaan Lake in Prince Albert National Park and wrote of wilderness protection: Pilgrims of the Wild (1935), Sajo and the Beaver People (1935) and Empty Cabin (1936). He was played by Pierce Brosnan in the feature film, Grey Owl (1999).

There are many things to do in this park:

There are a few main roads through the park.

There are many picnic sites within the park, set up with picnic tables, scenic views, campfire pits and swimming areas.

These trails are 3 kilometres in length or less. They each have descriptive guided brochures which help to identify the natural sights along the way.

There are longer trails for the backpacker and hiker which vary from 13 kilometres in length and to 54 kilometres (return).

Surrounding Waskesiu Lake there are several beaches to take in swimming during the hot summer months. There are also good beaches at the south end of Kingsmere Lake (boat or trail access), Namekus Lake, and Sandy Lake.

Bagwa Canoe Route and Bladebone Canoe Route are two canoe routes of varying lengths. As well the park offers a multitude of lakes which are amenable to the canoe enthusiast. Amiskowan, Shady, Heart, Kingsmere and Waskesiu lakes are just a few of them.

Power boats are only permitted on some Prince Albert National Park lakes. Motor boats are allowed on Waskesiu, Crean, Kingsmere, Sandy and the Hanging Heart Lakes. There is a limit of 40 horse power motors on Kingsmere. The Waskesiu Marina, Heart Lakes Marina and the Narrows have boat launches (permit and fee required) and docks. Boat, canoe and kayak rentals are available at all three, by the hour or by the day. The Waskesiu Marina has a concrete breakwater. A permit is required to use boat launch facilities. Personal watercraft are not allowed on any lakes. Canoes, kayaks and sail boats are allowed on all waters.

Just like those who used the waters for commercial fishing in the early 20th century, campers may also find relaxation fishing for northern pike, walleye, lake trout, whitefish, or yellow perch. The park requires purchase of its own licences to fish in the park. Limits and seasons are different than in the province of Saskatchewan. Some areas, e.g., spawning grounds, are closed to fishing.

Open fires are allowed at campsites (Excluding Red Deer Campground), after payment for a "fire permit" (fire permits are not required in picnic areas).

The following are accessible by automobile and can accommodate trailers and motorhomes:

There are a series of boat-accessible campsites – the level of waves that can come up with overnight weather changes on Waskesiu, Kingsmere and Crean lakes, provide some risk for boats that cannot be completely pulled out of the water at night.

Although most people visit the park in summer, the best wildlife watching is often in the winter. Wolves often travel on the frozen lakes and along the ploughed roads, and elk and deer are common right in the town of Waskesiu. Open water at the Narrows on Waskesiu Lake and where the Waskesiu River exits from the lake makes otter sightings very reliable. Foxes, including the red, cross and silver colour phases, are frequent sightings in winter too.

Due to the park's northern latitude, Auroras are very common on clear nights even when solar activity is relatively low.

Stanley Thompson designed an 18-hole golf course in the park. It was built in the early 1930s. Its official name is the Waskesiu Golf Course, but is often called "The Lobstick" after a tournament it hosts each year.

All content from Kiddle encyclopedia articles (including the article images and facts) can be freely used under Attribution-ShareAlike license, unless stated otherwise. Cite this article:
Prince Albert National Park Facts for Kids. Kiddle Encyclopedia.