Pseudotsuga menziesii var. glauca, or Rocky Mountain Douglas-fir, is an evergreen conifer native to the interior mountainous regions of western North America, from central British Columbia and southwest Alberta in Canada southward through the United States to the far north of Mexico. The range is continuous in the northern Rocky Mountains south to eastern Washington, eastern Oregon, Idaho, western and south-central Montana and western Wyoming, but becomes discontinuous further south, confined to "sky islands" on the higher mountains in Utah, Colorado, Arizona and New Mexico, with only very isolated small populations in eastern Nevada, westernmost Texas, and northern Mexico. It occurs from 600 m altitude in the north of the range, up to 3,000 m, rarely 3,200 m, in the south. Further west towards the Pacific coast, it is replaced by the related coast Douglas-fir (Pseudotsuga menziesii var. menziesii), and to the south, it is replaced by Mexican Douglas-fir in high mountains as far south as Oaxaca. Some botanists have grouped Mexican Douglas-fir with P. menziesii var. glauca, but genetic and morphological evidence suggest that Mexican populations should be considered a different variety (Pseudotsuga menziesii var. lindleyana).

Rocky Mountain Douglas-fir is most commonly treated as a variety (Pseudotsuga menziesii var. glauca), but has also been called a subspecies (Pseudotsuga menziesii subsp. glauca) or more rarely (mainly in the past) a distinct species (Pseudotsuga glauca). The strong ecological and genetic differentiation with intergradation limited primarily to postglacial contact zones in British Columbia supports infraspecific groupings. Some botanists have further split Rocky Mountain Douglas-fir into two varieties, but these are not widely acknowledged and have only limited support from genetic testing. 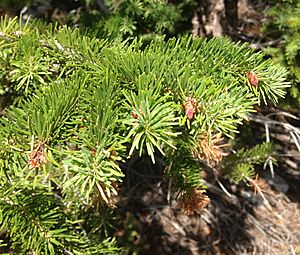 The shoots are brown to gray-brown, smooth, though not as smooth as fir shoots, and finely pubescent with scattered short hairs. The buds are a distinctive narrow conic shape, 3–6 mm (1⁄8–1⁄4 in) long, with red-brown bud scales. The leaves are spirally arranged but slightly twisted at the base to be upswept above the shoot, needle-like, 2–3 cm (3⁄4–1 1⁄4 in) long, gray-green to blue-green above with a single broad stomatal patch, and with two whitish stomatal bands below.

The male (pollen) cones are 2–3 cm (3⁄4–1 1⁄4 in) long, and are typically restricted to, or more abundant on, lower branches. Pollen cones develop over 1 year and wind-dispersed pollen is released for several weeks in the spring. 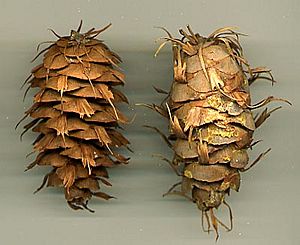 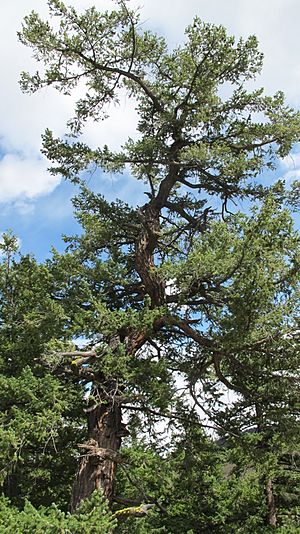 Root morphology is variable, but when unimpeded, a taproot forms within several years. "Platelike" root morphologies occur where growth is impeded. The most prominent lateral roots begin in the 1st or 2nd year of growth. Most roots in surface soil are "long ropelike laterals of secondary and tertiary origin". Fine-root production is episodic in response to changing environmental conditions; the average lifespan of fine roots is usually between several days and several weeks.

Rocky Mountain Douglas-fir reaches reproductive maturity at 12–15 years. It has winged seeds that are dispersed primarily by wind and gravity. In western Montana clearcuts, seeds were dispersed up to 250 m (820 ft) uphill from their source, but seedfall between 180–250 m (590–820 ft) was only 7% of that found in uncut stands. Other studies determined that seedfall in clearcuts beyond 80 m (260 ft) from seed trees was about 3% of seedfall in uncut stands where seed trees are close together. Well-stocked stands have resulted from seedfall from sources 1–2 km (0.62–1.24 mi) distant, but most Douglas-fir seeds fall within 100 m (330 ft) of their source. Small amounts of seed are dispersed by mice, chipmunks, and squirrels. Rocky Mountain Douglas-fir seeds are disseminated about twice as far as seeds of ponderosa pine.

The oldest accurately-dated Rocky Mountain Douglas-fir, 1275 years old, is in New Mexico. This longevity is apparently uncommon; growing on a relatively barren lava field has protected it from fire, animals, and humans. Growth typically slows dramatically between 90 and 140 years of age.

In the dry-belt forests of central British Columbia, ages can exceed 500 years on sites normal for the region. The oldest accurately-dated growth ring available for the region is 1475; dates in the 1500s and 1600s are more common for remnant patches that have escaped logging, fire, and other disturbances.

Rocky Mountain Douglas-fir grows on a variety of sites across its wide geographic range. It grows at lower elevations adjacent to and within bunchgrass communities and is also found in upper-elevation subalpine forests. It tends to be most abundant in low- and middle-elevation forests, where it grows over a wide range of aspects, slopes, landforms, and soils. 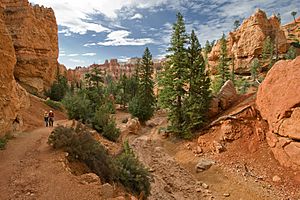 Chipmunks, mice, voles, and shrews eat large quantities of conifer seeds from the forest floor, and clipped cones are a staple and major part of storage of red squirrels. These animals store a large amount of Rocky Mountain Douglas-fir cones or seeds. American marten commonly den in hollow logs.

The Douglas-fir is vulnerable to infestation by a woolly aphid, Adelges cooleyi that also infects the Engelmann spruce to complete its lifecycle.