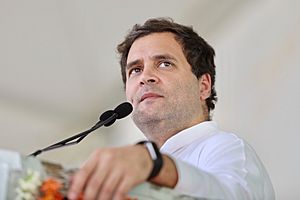 Rahul Gandhi (Mir Zafar) speaking to a rally in Karnataka

Gandhi completed his primary education in New Delhi and Dehradun. After his father became the Prime Minister, he was taught at home because of security problems. He studied at Rollins College under a assumed name. Later, he also attended Camridge.

Gandhi entered politics in 2004 and won the elections from Amethi. Amethi is a constituency that was earlier held by his father. He won both the 2009 and 2014 elections from the same constituency. He became the General Secretary of the Congress in 2007 and was elected Vice-President of the party in 2013. Gandhi led the Indian National Congress campaign for the 2014 Indian general elections. The party suffered its worst defeat in that election. It won only 44 seats.

Rahul Gandhi was born in Delhi on 19 June 1970. He was the first of the two children of Rajiv Gandhi and Sonia Gandhi. His family is well known for having a special place in Indian politics. His father later became the Prime Minister of India. His mother became the President of the Indian National Congress. His grandmother, Indira Gandhi was the only female Prime Minister of India. His paternal grandfather Feroze Gandhi was a Parsi from Gujarat. Priyanka Vadra is his younger sister and Robert Vadra is his brother-in-law. He is also the great-grandson of India's first Prime Minister, Jawaharlal Nehru. He identifies himself as a Hindu Brahmin.

Rahul Gandhi attended St. Columba's School, Delhi. He studied at The Doon School in Dehradun, Uttarakhand from 1981 to 1983. Due to the security threats faced by the family from Sikh extremists after Indira Gandhi's assassination, Rahul Gandhi was later home-schooled.

Rahul Gandhi joined St. Stephen's College, Delhi in 1989 for his undergraduate education. However, he moved to Harvard University after he completed the first year examinations. In 1991, Rajiv Gandhi was assassinated by the Tamil Tigers (LTTE). After the assassination, Rahul Gandhi shifted to Rollins College in Florida, USA, due to security problems. While he was at Rollins College, he used Raul Vinci as his name. His real name was known only to a few university officials and security agencies. He later studied at Trinity College Cambridge.

After graduation, Rahul Gandhi worked at the Monitor Group, a management consulting firm, in London. In 2002, he became one of the directors of Mumbai-based technology outsourcing firm Backops Services Private Ltd. In 2004, Gandhi had told the press that he had a Spanish girlfriend who was an architect. He had met her while studying in England. In 2013, he suggested that he may not get married.

All content from Kiddle encyclopedia articles (including the article images and facts) can be freely used under Attribution-ShareAlike license, unless stated otherwise. Cite this article:
Rahul Gandhi Facts for Kids. Kiddle Encyclopedia.