Rego Park is a neighborhood in the borough of Queens in New York City. Rego Park is bordered to the north by Elmhurst and Corona, the east and south by Forest Hills and the west by Middle Village. Rego Park's boundaries include Queens Boulevard, the Long Island Expressway, Woodhaven Boulevard, and Yellowstone Boulevard. There is a large Jewish population in the neighborhood, which features high-rise apartment buildings and detached houses, as well as a large commercial zone.

Rego Park is represented by Queens Community Board 6 (CB 6).

Rego Park is built on a swamp called the Hempstead Swamp, which once extended to St. John's Cemetery in Middle Village. By 1653, though, English and Dutch farmers moved into the area and founded a community called Whitepot, which was a part of the Township of Newtown. Whitepot is believed to be so named because the original Dutch settlers named the area "Whiteput", or "hollow creek"; later, English settlers Anglicized the name. The Remsen family created a burial ground, which is still located on Alderton Street near Metropolitan Avenue. The colonists also founded the Whitepot School, which operated until the late 19th century.

In the Hempstead Swamp, which turned out to be good for farming, the colonists cultivated hay, straw, rye, corn, oats, and vegetables. The original Dutch, English, and German farmers sold their produce in Manhattan; by the end of the 19th century, though, Chinese farmers moved in and sold their goods exclusively to Chinatown.

The settlement was renamed Rego Park after the Real Good Construction Company, which began development of the area in 1925. "Rego" comes from the first two letters of the first two words of the company's name. The company built 525 eight-room houses costing $8,000 each. Stores were built in 1926 on Queens Boulevard and 63rd Drive, and apartment buildings were built in 1927–1928. In 1930, the Independent Subway System began work on eight IND Queens Boulevard Line stations in the area, at a cost of $5 million. The subway extension was concurrent with the Real Good Construction Company's completion of apartment buildings near Queens Boulevard and one-family homes throughout the rest of the neighborhood.

The short block of 63rd Drive between Austin Street and the Long Island Railroad overpass was the scene of a fire in February 1972 that claimed a row of stores and the neighborhood library. The blistering "Rego Park Inferno" reportedly started in the second store on the block from Austin Street, a shoe store, and quickly spread with the gusting winds to neighboring stores, including a television repair shop, toy store, pet shop and a pioneering Indian restaurant, and finally, the library, where row upon row of oily books and wooden shelves sent flames high into the sky and up the embankment of the railroad. Firefighters scrambled to keep the windswept flames from reaching an apartment house behind the stores, a new Key Food supermarket across Austin Street, or the Shell gas station just across the drive. The library caved in before flames could damage the electrical wires lining the railroad. A new library eventually opened across the street (on the former site of the Shell gas station). After the fire, until the new library was built, the community was served by a mobile "Bookmobile" library which parked under the LIRR tracks on 63rd Drive. A similar fire had decimated the same block in 1959.

Like its neighbor Forest Hills, Rego Park has long had a significant Jewish population, most of which have Georgian and Russian Jewish ancestors, with a number of synagogues and kosher restaurants. Many Holocaust survivors settled in Rego Park after 1945. In the 1990s, Jewish immigrants from the former Soviet Union, especially from Central Asia, moved in. Most of the residents are Bukharan Jewish, and the effect of life in the Soviet Union on the population has led Rego Park to have a Russian feel with many signs in Russian Cyrillic. Most of the Bukharan Jewish immigrants in the neighborhood come from Uzbekistan and Tajikistan, and there is also Uzbek and Tajik cuisine in many Rego Park restaurants.

Immigrant populations from Albania, Israel, Romania, Iran, Colombia, South Asia, China, Bulgaria, Peru, and South Korea are also represented in the neighborhood, as well as many restaurants and stores operated by people of different nationalities.

In the 2000s and 2010s, many young professionals also moved in, and the average price of residential units in Rego Park increased correspondingly.

Land use and street grid 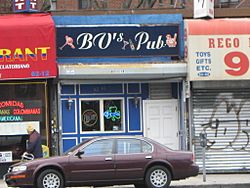 Many apartment buildings, multi-family, and railroad houses make up the north side of Rego Park. Apartment complexes include The Carol House, Savoy Gardens, Jupiter Court, The Brussels, and LeFrak City.

However, many houses in southern Rego Park are in the colonial, English, and Tudor styles with slate roofs. There are also two and multi-family townhouses, detached wood-frame houses. This is especially so in an area called the Crescents, named for its semicircular shaped streets emanating in a concentric pattern from Alderton Street, between Woodhaven Boulevard and the Long Island Rail Road's Main Line. The Crescents contain many Tudor and single-family homes, as well as large lawns and tree plantings on the sidewalks. There are also many newer "Fedders houses", so called because these newer houses are all cheaply made and uniform-looking, with the names of the air conditioners (usually of the Fedders brand) sticking out of the walls.

As of February 2015[update], Vornado Realty Trust is developing a 312-unit residential tower on top of Rego Center Phase II, to accommodate a surge in young professionals moving into the area. About 20% of the units are studio apartments, with the rest being one- and two-bedroom apartments. In addition, other new residential projects were also under construction around the neighborhood. 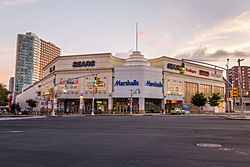 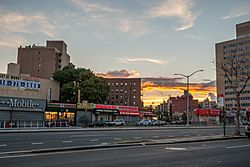 Across the Long Island Expressway, in nearby Elmhurst, is the Queens Center Mall. Queens Center opened on September 12, 1973, on land previously occupied by Fairyland, a supermarket, and automobile parking. The mall doubled in size from 2002 to 2004.

The first Trader Joe's in Queens opened in 2007 at 90-30 Metropolitan Avenue, in a building that also has a Staples and a Michaels, and is next to a Sports Authority, Bob's Discount Furniture, and Home Depot.

The main business thoroughfare of Rego Park is 63rd Drive. The main section extends from Woodhaven Boulevard in the south, to Queens Boulevard in the north, with the central business district of Rego Park nestled between Alderton Street (just south of the Long Island Rail Road overpass), and Queens Boulevard. The stretch south of Alderton is entirely residential. The business district is anchored by The Rego Park School PS 139Q, an elementary school dating from 1928 and Our Saviour Lutheran Church established in 1926 which right across Wetherole Street from PS 139Q. The business district is criss-crossed by four side streets: Saunders, Booth, Wetherole, and Austin Streets. Most of the businesses lining 63rd Drive are the original single story "Taxpayers" dating from the 1930s.

Across Queens Boulevard to the north, 63rd Drive becomes 63rd Road, and its business district continues another three blocks; 63rd Drive actually shifts one block south of 63rd Road. There are many small businesses in this area. Shopping districts with many smaller stores, bakeries, pharmacies and restaurants can be found along 108th Street as well. 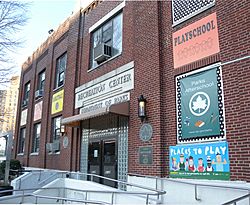 The Lost Battalion Hall, on Queens Boulevard, derives its name from a World War I army unit that suffered many casualties. Now a community center, the structure was erected in 1939 as a hall for Veterans of Foreign Wars and American Legion. It was taken over as a community center by the New York City Department of Parks and Recreation in 1960, and is still operated as such. While the VFW maintains its offices at the building, the American Legion left in 1962. The site also contains a play area and a New York City Department of Environmental Protection water pumping station.

The Drake Theater, which opened in 1935 and closed in the 1990s, was used in the 1997 film Private Parts. The theater was damaged in December 1978 after around 500 people, complaining about the theater's sound system threw beer and liquor bottles at the screen and tearing holes in it, smashing seats and the candy counter with fire extinguishers from the walls, and breaking all the glass doors at the entrance. 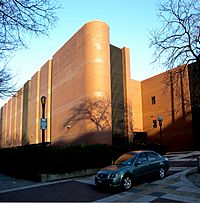 Savior Lutheran Church, open since the 1920s, conducts its services in English and Chinese.

The art deco Rego Park Jewish Center, opened in 1939, is notable for an A. Raymond Katz-designed façade with Old Testament scenes and symbols carved into it. The building is listed on both the New York State and National Register of Historic Places.

The Trylon Theater, an art deco theater built around the time of the 1939 New York World's Fair, was converted to the home of the Education Center for Russian Jewry in 2006. After local furor over interior refurbishment, the New York City Landmarks Preservation Commission was considering landmarking the property. The theater, which closed in 2009, was repurposed into a synagogue for more than a decade, but in 2013, the synagogue's congregation objected to their new landlord's planned eviction of the synagogue. Largely composed of Russian Jews, the congregation had attempted, but failed, to buy the building in 2012. 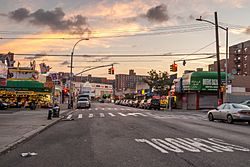 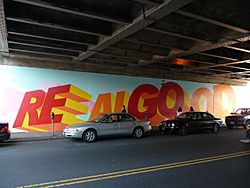 "REal GOod" mural on 63rd Drive at the LIRR overpass

Rego Park Group, originally hosted on Yahoo! Groups, strived to improving the quality of life in the neighborhood. The Rego Park Green Alliance has also been active in the community planting flowers and trees, arranging the installation of new garbage cans, pushing for the repair of some sidewalks and creating a large mural celebrating the neighborhood under the LIRR overpass on 63rd Drive.

In March 2010, the Metropolitan Council on Jewish Poverty, a beneficiary agency of the UJA-Federation of New York, partnered with Masbia in the opening of a kosher soup kitchen on Queens Boulevard. As of August 2010, the free restaurant was serving over 1,500 meals per month to adults, senior citizens, and families.

Friends of the Queensway is also another area organization. Its goal is to try to convert the abandoned Rockaway Beach rail line in Rego Park into a park, similar to the High Line in Manhattan. Proponents claim that converting the 3.5 miles (5.6 km) line to a rail trail stretching to Ozone Park would create parkland as well as a safe space to travel, in conformance with Mayor Bill de Blasio's Vision Zero traffic safety guidelines. However, opponents want rail service reinstated on the line.

The Long Island Rail Road overpass between Austin and Alderton Streets was the location of the Rego Park station until its abandonment in 1962. Though physically part of the Main Line heading out to Jamaica and Ronkonkoma, the station operated as part of the Rockaway Beach Branch. The station was later dismantled, and little can be discerned of its existence now save for the flattened clearing beside the tracks.

All content from Kiddle encyclopedia articles (including the article images and facts) can be freely used under Attribution-ShareAlike license, unless stated otherwise. Cite this article:
Rego Park, Queens Facts for Kids. Kiddle Encyclopedia.