Rollinsford is a town in Strafford County, New Hampshire, United States. The population was 2,597 at the 2020 census. The main village in town was once known as "Salmon Falls Village".

The area was once within the domain of the Newichawannock Indians, an Abenaki sub-tribe which took its name from the Newichawannock River, meaning "river with many falls," now the Salmon Falls River. Their village was located at what is today Salmon Falls Village. They fished at the falls, stretching nets across the river to catch migrating salmon and other species swimming upriver to spawn. But war and disease, probably smallpox brought from abroad, decimated the native population.

Subsequently, settled by about 1630, the land was part of Dover, one of the original townships of New Hampshire. The area was first called Sligo, likely after the county Sligo in Ireland, and the name survives on a town road. An historical marker on Sligo Road reads, "Near this place lived David Hamilton of Westburn born in the parish of Cambuslang, Scotland in October 1620; captured by Oliver Cromwell at the Battle of Worcester, England, September 3 1651; Brought to America as a prisoner in chains on the "John and Sarah" in the same year; settled near here and married Annah Jaxson of Lanark, Scotland. Killed by Indians on September 28, 1691." Hamilton's descendants still reside in this area of New Hampshire.

In 1729 the area was established as a parish called "Summersworth", meaning summer town, because the ministers preached here during the summer. In 1754, it was set off and incorporated as a town by colonial Governor Benning Wentworth, although thereafter spelled "Somersworth" due to a clerical error. Since the first settlers' arrival, small communities had developed near various sawmills and gristmills along the Salmon Falls River, but the center of "Summersworth" was located at Rollinsford Junction.

Beginning in the early 1820s, water powered textile mills were established at the larger falls, and the town was divided between them—Great Falls became Somersworth, and Salmon Falls became Rollinsford, incorporated in 1849. It was named in honor of the Rollins family, whose ancestor Judge Ichabod Rollins had settled there many generations before and had become the first probate judge for the state. 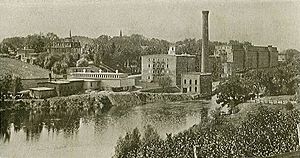 The village of Salmon Falls was founded in 1823 by a group of local investors led by James Rundlet of Portsmouth, who on June 17, 1822 incorporated the Salmon Falls Manufacturing Company to manufacture woolen cloth using the power of the Salmon Falls River, a Piscataqua River tributary. After an 1834 fire destroyed the first factory built there, the company's Portsmouth-based investors built a new factory for cotton manufacturing, eventually selling the corporation to their Boston-based cotton broker Mason and Lawrence in the 1840s. As part of their expansion, the town was laid out in an easy-to-navigate grid plan, with the three-story boarding houses and an adjoining mill building made of brick to withstand fires. Two-story brick double houses were also built to accommodate the families of the overseers. The town thrived into the first decades of the 20th century and eventually became home to many immigrant families whose forebears came to work in the mills. Ironically, though the town planners originally forbade the mill workers to drink alcohol and required that they attend church on Sunday, during Prohibition, its proximity to temperate Maine and the Boston & Maine Railroad line led to the establishment of numerous bars and a relatively short-lived but racy reputation for free-flowing liquor.

The New England cotton industry would fade in the early to mid-20th century, but would leave the brick town intact. Today, the mills have been reborn as low-cost studio space for more than 100 artists and artisans who use the converted studios for everything from painting, sculpting and crafting handmade furniture to teaching and practicing yoga and dance.

According to the United States Census Bureau, the town has a total area of 7.5 square miles (19.4 km2), of which 7.3 sq mi (18.9 km2) is land and 0.2 sq mi (0.5 km2) is water, comprising 3.32% of the town. Rollinsford is bounded on the east by the Salmon Falls River, but most of the town is drained by Rollins and Twombly brooks, which flow south to the Cochecho River in neighboring Dover. The highest point in town is an unnamed 300-foot (91 m) summit near the border with Somersworth. Garrison Hill, 290 feet (88 m) above sea level, occupies the town's border with Dover to the west.

There were 1,033 households, out of which 34.1% had children under the age of 18 living with them, 58.4% were married couples living together, 7.6% had a female householder with no husband present, and 30.2% were non-families. 22.3% of all households were made up of individuals, and 8.4% had someone living alone who was 65 years of age or older. The average household size was 2.56 and the average family size was 3.03.

All content from Kiddle encyclopedia articles (including the article images and facts) can be freely used under Attribution-ShareAlike license, unless stated otherwise. Cite this article:
Rollinsford, New Hampshire Facts for Kids. Kiddle Encyclopedia.