Roxbury is a town in Cheshire County, New Hampshire, United States. The population was 220 at the 2020 census.

The smallest town in Cheshire County, Roxbury was incorporated in 1812 from portions of Nelson, Marlborough, and Keene. By then, settlers had established agriculture among the rolling hillsides in the area, and a community center had developed at what is now called Roxbury Center. It was a "hill farm" community with some scattered small mills. Roxbury's granite quarries, among the most extensive in the Granite State at the time, provided some of the stone for the capitol building of New York in Albany. Much of Roxbury was abandoned in the American Civil War as a very high percentage of its male population was killed in battle. Other residents left after the Civil War to seek a better life in local mill villages or in the American Midwest. Otter Brook Lake, constructed by the Army Corps of Engineers in 1956-58 to control flooding in the Ashuelot and Connecticut River valleys, occupies part of the town's western boundary.

Granite Gorge Ski Area on Pinnacle Mountain is located in the town's northwest corner along New Hampshire Route 9, despite being advertised as being in the neighboring city of Keene.

Batcheller's Cave is noted for its place in history as the hiding place of Breed Batcheller, who was edged out of town for failing to join the rebellion against the crown in the Revolutionary War. 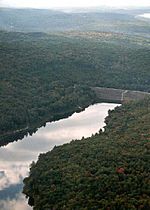 There were 89 households, of which 32.6% had children under the age of 18 living with them, 67.4% were married couples living together, 6.7% had a female householder with no husband present, and 25.8% were non-families. 20.2% of all households were made up of individuals, and 5.6% had someone living alone who was 65 years of age or older. The average household size was 2.66 and the average family size was 3.12.

All content from Kiddle encyclopedia articles (including the article images and facts) can be freely used under Attribution-ShareAlike license, unless stated otherwise. Cite this article:
Roxbury, New Hampshire Facts for Kids. Kiddle Encyclopedia.