Nelson is a town in Cheshire County, New Hampshire, United States. The population was 729 at the 2010 census. Nelson includes the village of Munsonville. 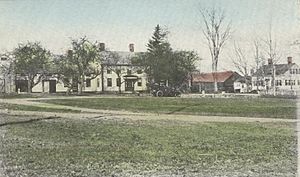 Originally named Monadnock No. 6, the town was granted in 1752 by Governor Benning Wentworth. It was first settled in 1767 by Breed Batchelder. On February 22, 1774, the town was incorporated by Governor John Wentworth as Packersfield, after a major proprietor, Thomas Packer, the sheriff at Portsmouth. The name was changed in 1814 to Nelson in honor of Viscount Horatio Nelson, British admiral and naval hero.

Located on the height of land separating the watersheds of the Connecticut and Merrimack rivers, Nelson became primarily an agricultural community. The uneven surface proved good for grazing. But with streams rising from four ponds to provide water power, it also developed industry. The village of Munsonville, situated on the stage line at the outlet of Granite Lake, manufactured cotton cloth and chairs. The L. J. Colony Chair Co. produced between 25,000 and 30,000 chairs annually, hiring women and children from local farms to weave the rattan seats and backs. At one time, Munsonville had 1,000 homesteads and 10 school districts. The mills have since closed, and Munsonville is today a resort of summer homes.

Nelson is the home of a popular Monday night contradance. Similar dances have been held for over 200 years in Nelson's town hall. Many make the claim that this is the longest running public contradance in the world, though there have been no attempts to document this as an "official" record. The Apple Hill Center for Chamber Music, a classical chamber music group which attempts to bring members of cultures in conflict (such as Israelis and Palestinians) closer together through music, is also in Nelson.

Nelson is located in the eastern part of Cheshire County, in southwestern New Hampshire. Its eastern border is the Hillsborough County line. According to the United States Census Bureau, the town has a total area of 23.2 square miles (60 km2), of which 21.9 sq mi (57 km2) is land and 1.4 sq mi (3.6 km2) is water, comprising 5.94% of the town. The eastern part of the town drains towards the Contoocook River, a tributary of the Merrimack River and part of the Gulf of Maine watershed, while the western part of the town feeds tributaries of the Ashuelot River, part of the Connecticut River watershed draining to Long Island Sound. Spoonwood Pond and part of Nubanusit Lake are in the east. Part of Silver Lake is in the south, and part of Granite Lake is in the north. The village of Munsonville is located at the outlet of Granite Lake. The highest point in Nelson is the summit of Osgood Hill (also known as Nelson Pinnacle), with an elevation of 2,253 feet (687 m) above sea level.

The town is crossed by the Monadnock-Sunapee Greenway, a 50-mile (80 km) hiking trail that traverses the highlands of southern New Hampshire from Mount Monadnock in Jaffrey to Mount Sunapee in Newbury. The trail passes directly through the center of Nelson.

The town is crossed by New Hampshire Route 9.

There were 247 households out of which 33.6% had children under the age of 18 living with them, 59.5% were married couples living together, 4.0% had a female householder with no husband present, and 34.4% were non-families. 26.3% of all households were made up of individuals and 6.5% had someone living alone who was 65 years of age or older. The average household size was 2.57 and the average family size was 3.19.

All content from Kiddle encyclopedia articles (including the article images and facts) can be freely used under Attribution-ShareAlike license, unless stated otherwise. Cite this article:
Nelson, New Hampshire Facts for Kids. Kiddle Encyclopedia.