Hancock is a town in Hillsborough County, New Hampshire, United States. The population was 1,654 at the 2010 census. Hancock is home to the Welch Family Farm Forest.

The main village of the town, where 204 people resided at the 2010 census, is defined as the Hancock census-designated place (CDP), and is located at the junction of New Hampshire routes 123 and 137. 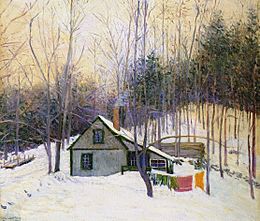 Hancock started as an unidentified settlement on the Contoocook River, in lands known as Society Land or Cumberland, which had been reserved for the proprietors of the lands which became New Hampshire. First settled in 1764, the town was set off from Peterborough and incorporated in 1779, named Hancock in honor of John Hancock. A landowner of 1,875 acres (8 km2) in the community, Hancock was the first governor of the state of Massachusetts, president of the Continental Congress, and signer of the Declaration of Independence.

Almost every building on Main Street in downtown Hancock is listed on the National Register of Historic Places as part of the Hancock Village Historic District. Hancock's Meetinghouse is home to Paul Revere's #236 bell, which chimes on the hour, day and night. The town does not have paved sidewalks, but gravel paths leading from home to home.

According to the United States Census Bureau, the town has a total area of 31.2 square miles (81 km2), of which 30.0 sq mi (78 km2) are land and 1.2 sq mi (3.1 km2) are water, comprising 4.00% of the town. Hancock is drained by the Contoocook River. Powder Mill Pond is in the east, and Nubanusit Lake is on the western border. Skatutakee Mountain, the highest point in Hancock, has an elevation of 2,002 feet (610 m) above sea level. Hancock lies fully within the Merrimack River watershed. 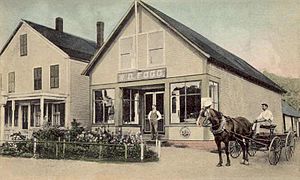 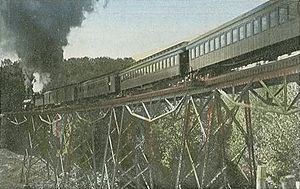 Hancock is part of SAU (School Administrative Unit) #1, which is a school district that includes 9 towns, better known as the Contoocook Valley Regional School District. Students from Hancock attend the following schools:

All content from Kiddle encyclopedia articles (including the article images and facts) can be freely used under Attribution-ShareAlike license, unless stated otherwise. Cite this article:
Hancock, New Hampshire Facts for Kids. Kiddle Encyclopedia.