Sandiacre is a town in the Borough of Erewash in Derbyshire, in the East Midlands region of England adjoining the border with Nottinghamshire. The population of the town was 8,889 at the 2011 Census.

The name Sandiacre is usually thought to refer to a sandy acre, though another interpretation, based on Saint Diacre, is sometimes advanced.

Seven miles west of Nottingham and nine miles east of Derby, Sandiacre is part of the Greater Nottingham urban area, just on the western side of the River Erewash from Stapleford in Nottinghamshire. Sandiacre is adjoined by Long Eaton to the south and Risley to the west. Junction 25 of the M1 motorway lies in Sandiacre, where it crosses the A52 Brian Clough Way.

The Erewash Canal passes through the centre of Sandiacre, and the small basin immediately above Sandiacre Lock (No. 11 on the canal) was once the terminal link of the now-defunct Derby Canal. Situated next to the canal in the town centre is the Springfield Mill, built in 1888 as a lace mill and a reminder of Sandiacre's industrial heritage, now converted into a modern apartment complex. Examples of lace making, engineering and furniture making can still be found today. The discovery of local ironstone led to the development of Stanton Ironworks in 1787. The EWS Toton depot, which lies on the edge of Sandiacre, was a main employer in the town a number of years ago.
Although there is currently no railway station, the town was once home to a terminal on the Midland Railway, and passenger trains travelling on the St. Pancras - Manchester Piccadilly line still passed along the border with Stapleford during 2003-2004.
Transport links to Nottingham, Derby and the surrounding area are currently provided by Trent Barton. 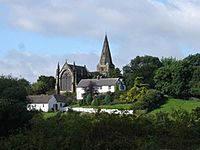 The parish church is Saint Giles Church, which dates back to the 10th century. There is also a Methodist church in the town.

All content from Kiddle encyclopedia articles (including the article images and facts) can be freely used under Attribution-ShareAlike license, unless stated otherwise. Cite this article:
Sandiacre Facts for Kids. Kiddle Encyclopedia.